"It's snowing at Sheep Ranch"

So said a voice in line at the grocery store.

"At Smith Station?" another asked.

I don't know whether there were two snowflakes or two inches of snow.  But it's not that far away and at about the same elevation as my house. Yesterday (well, day-before-yesterday) it was air conditioning, today heat.

We awakened to darkness and drizzle. By three o'clock, when I had to go to town to pick up a prescription, it was all sunny. I thought. I started out with only a vest over my shirt. It was freezing in the garage, so went back inside to fetch a jacket.

I wheeled out of the garage. I was living in a little island sun, surrounded by big billowy clouds, many of them black. 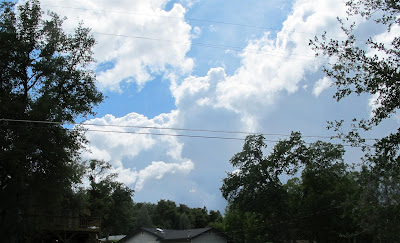 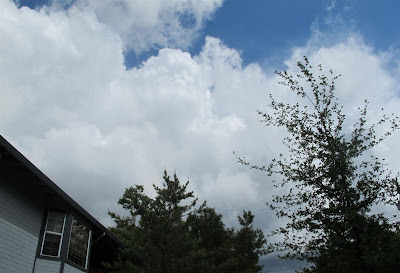 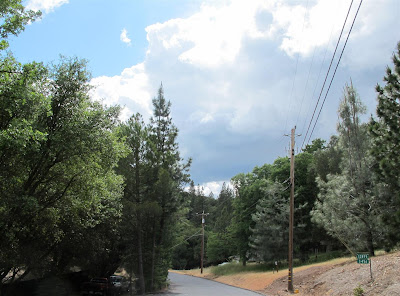 It's the silly season around here.

Traffic on the highway through town is already intense for the holiday weekend. Not only is Yosemite a big draw, but there is an outdoor music festival up near there that probably started tonight. We hope the weather improves for the travelers. It has been delightful in the lead-up, only to get wacky for the weekend. That happens, too often.

My prescription wasn't ready. It was supposed to have been sent to the pharmacy yesterday as I left the doctor's office.

When the prescription hadn't arrived at the pharmacy by the time I did after the appointment, I had them check whether they had any of my medication on hand (for migraine, just in case, for my upcoming trip). They didn't. Which is why I went back today. My prescription still hadn't arrived, so the medicine hadn't been ordered. This is supposed to be remedied by tomorrow. (I hate making the left turn out of the pharmacy into that Yosemite-bound traffic.)

We had a small group yesterday NeedleCrafts. A lot of our people are on the road for the holiday, too. Barbara finished a baby sweater she was knitting.  Really cute. And the deep yellow worked out better than some anticipated. 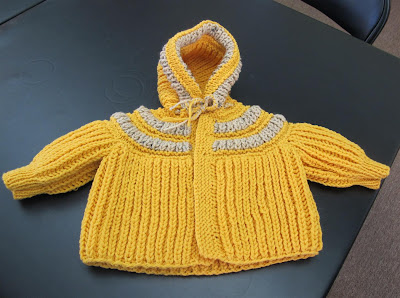 This has been a busy, eclectic week.  Besides clouds, there have been other reasons to look skyward. I tried to find something helpful about taking pictures of last Sunday's solar eclipse. I didn't understand how to apply most of the advice to my camera and I didn't have proper eye protection to get too fancy in figuring it out. I did a trial run Friday at pointing the camera backward over my shoulder.

Sister, her friend Linda and I went out to lunch on Saturday, then did some shopping in the little town of Groveland. Serendipity has something of everything.


Later that day I delivered Sister, Brother-in-Law and Linda to a wine cruise. I was their designated driver. Nonetheless, I had my own little disaster with the grape.

It was a big Sunday, too. The ladies went to a performance of the Pine Cone Singers in the afternoon.


After the performance, Sister, Brother-in-Law and Linda drove up toward Yosemite to have dinner at Evergreen Lodge, off in the forest. I tried to be good, so stayed home and worked on my pocket itinerary for my French Alps trip. Then I'd race outside every few minutes to see what I could or couldn't see of the solar eclipse.

I tried one of those pinhole things in a piece of cardboard shining through onto a white surface. I could see the little slices the moon took out of the sun, but I didn't have an extra hand to use the camera, so went back to the over-the-shoulder technique. These did not come out well, but I did catch a couple of blue sun sliver artifacts that I don't understand. I saw a similar photo on Facebook, but it doesn't strike me as being real, since I captured it on two different sides of the sun image. We are a little off the full eclipse trajectory, so didn't get darkness, just fairly dim, briefly. 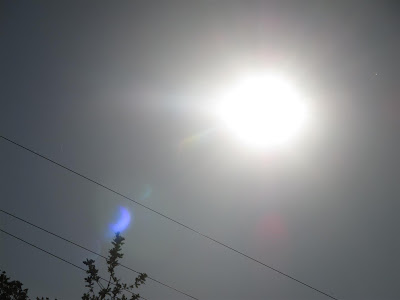 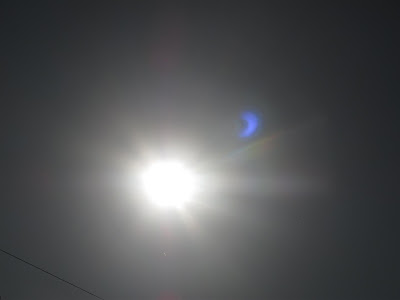 I very diligently worked on my itinerary on Monday. Not a celestial or weather event was recorded.

Tuesday went back to busy. I did my French homework, interspersed with doing French translation for my foreign phone chip instructions for the itinerary stuff.

Before I took my shower and went to town, I noticed that my hair is all white. Did I lie on my driver's license? I'd left it at "brown" on my recent renewal, although I'd considered salt-and-pepper. It looks fairly brown in the DL picture. What is this white hair??? After the shower, I reexamined it. Here's me, trying to get an objective look at it.

Then I headed to the city down the hill early to get my new SASes stretched out a bit on a spot next to my pinky toe. I exchanged a cosmetic item in the wrong color at the drugstore. I tried Wal-Mart again to find a couple of miscellaneous items I couldn't find on a previous trip. Still couldn't find them. I finished my errands two hours before French class.

Now what? Killed an hour at Starbucks, sitting out on the patio in hopes of escaping all the chatter inside and have a quiet read of my book. I didn't get that but I did get pictures of leaves and skies and spiky little fruits or nuts or whatever on this tree. 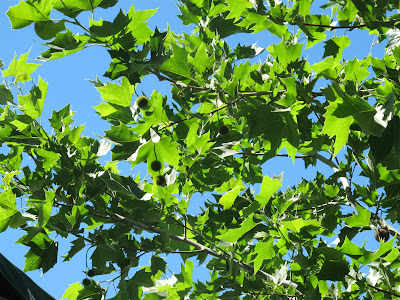 Then I shifted to fast food and reading. I forgot to tell them to hold the whipped cream on my malt. 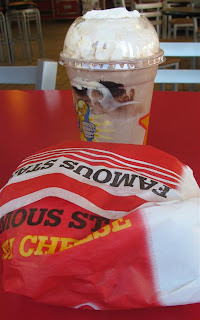 No one in French class, including the teacher, could figure out exactly what the translation is for "Conso Suivi." It has something to do with my French phone account. I came home to this beautiful sliver of moon, with Venus lurking nearby, up a little to the right behind the pine needles. 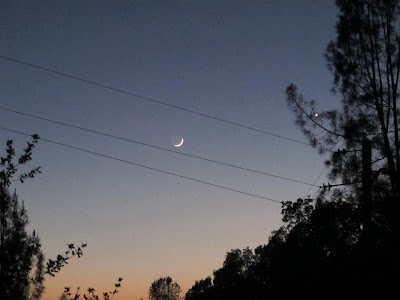 Wednesday Chloe had to go to the vet for her thyroid test. Wild cat that she is, she needs to be sedated to do the blood draw. It didn't help that as I was looking for her to put her in her crate, she had a dust up with Jean-Luc. In the scuffle, she dashed through the food dish. Grapes. Cat food. There seems to be a resemblance. In the scuffle putting her in the crate, she scratched me, too. 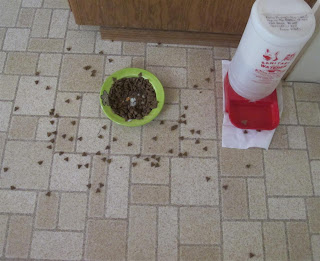 I've covered the week full circle, bumping up against my Thursday out for this week with my doctor's appointment and Barbara's little sweater. But I'll leave you with Jean-Luc at play with his favorite toy today.

He practically snatches my hand off as he makes a grab for this ribbon, which he chases around the house by the hour. 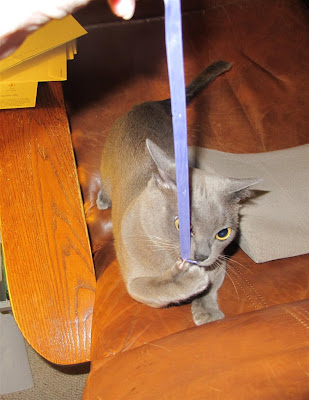 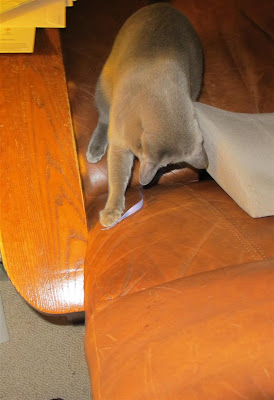 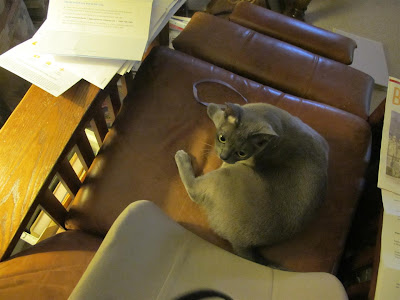 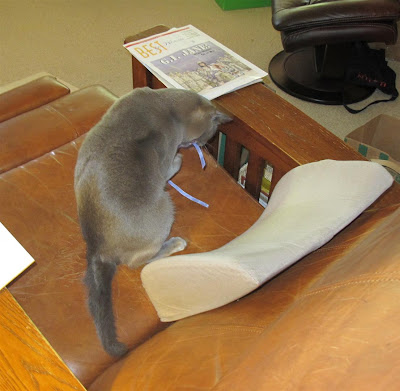