From Burning Water on Mother's Day to Thursday's Out

Lacking other plans for Mother's Day, I headed for the post office, untended for a couple of days, to see what might have shown up. Then I stopped by the market to get a few critical items, and, just as every time I go there, I paused at an upright frozen food cabinet opposite the meat counter and admired the fat frozen tamales lined up in a box. My usual reaction is "2.99 for a tamale. . . I don't want to pay 2.99 for a tamale," but suddenly decided to splurge in honor of Mother's Day. Should be easy enough to fix a tamale.

When I got home, I'd missed a phone call from Daughter, who'd left a singing Mother's Day message suspiciously reminiscent of a Happy Birthday song, and I received a "Happy Mother's Day" text message from Son, who asked if he could call at 5. Step-Daughter had left me a complimentary message on Facebook which turned into a conversation the previous evening.


The tamale preparation instructions were straightforward. The preferred method is to steam it for 45 minutes, snip the paper cover off inside the metal staples, unroll all the papers (alas, no real corn husks) and  . . . I didn't read any further, because I will proceed to desecrate it (in the eyes of a true aficionado) by putting ketchup on it.

I put water in the pan to just below the steamer basket, bring it to a boil, put the tamale in the steamer, set the timer for 45 minutes, and go back to work on my latest pocket itinerary project while I wait.

What could possibly go wrong!  (See? I don't even pose that as a question.)

I'm sensing a hot smell. I'm sensing a too hot smell. There's still 10 minutes to go on this cooking project. I go to look, lifting the lid and steamer basket out of the pan. There is a slightly flattened ball of water about an inch across racing around the bottom of the nearly dry pan, sizzling. I wish I'd grabbed my camera for that one, but I didn't get it until I'd removed the pan from flames and began very slowly adding tepid water to it. These little bubbles were dancing vigorously. 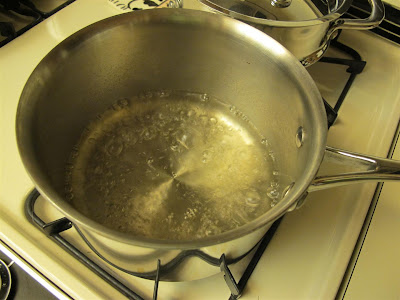 It was a good tamale, not pictured here. I think I plunged into eating it too fast. I followed it up with Häagan Dazs Vanilla Swiss Almond ice cream. They don't mention the chocolate that covers the almonds in the name of this ice cream and they don't have it in our store very often. It wasn't even on sale but that was another splurge to go with the tamale. And I do make it last for five servings, preferably strung out over at least that many days. It is my current "most favorite" ice cream. 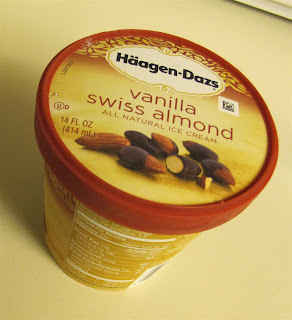 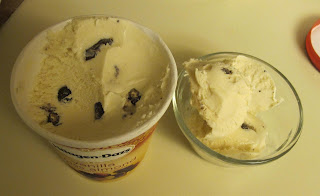 Some time this week, maybe even Mother's Day, I passed this good looking motorcycle parked along the back road to the post office and decided it looked so swell that I drove around the block to return and take its picture. The motorcycle of choice in this area is the Harley, and between two husbands, there have been at least three Harleys in the family, but I've always been a fan of the stealth motorcycle. These big Hondas qualify, and my most recent (read that as LAST) motorcycle was a big Honda scooter), but my favorite was my BMW, also a stealth motorcycle but in a slightly deeper note. I guess I like to sneak around and make quiet getaways. 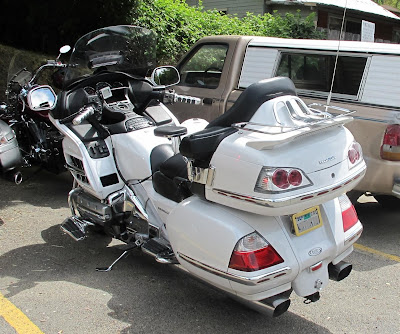 The big excitement was the arrival of my very cute running shoes. I must have taken this picture in the mirror, since I notice the XLT logo is reversed. 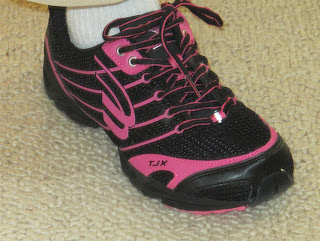 The feature I like about these is that the pink line in that location shortens the appearance of long feet jutting out in front of skinny, bony ankles. 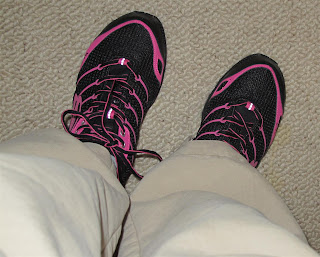 These are my also new SASses which extend like skis ahead of me. 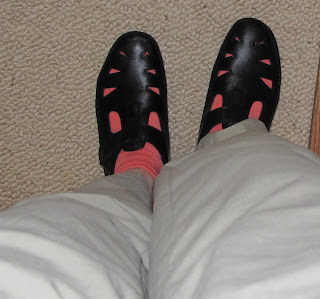 And the running shoes make me run. See me fly across the lawn. 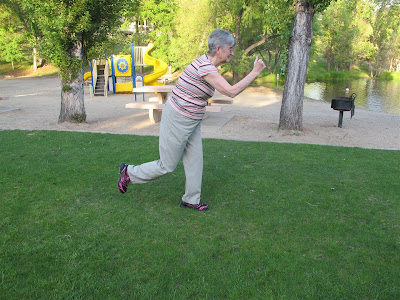 Last but not least, today was Thursday Out at NeedleCrafts, where nine ladies came to work their needle wonders. Rose has completed her Fair Isle sox to go with her Fair Isle sweater. She always wears matching sox and sweaters. The sweater would be done except that the sleeves came out too short. She had extended one sleeve before she got to the group today and shocked some of the knitters by cutting the cuff off of that left sleeve with scissors, and proceeded to get the cut edges back onto her needles. 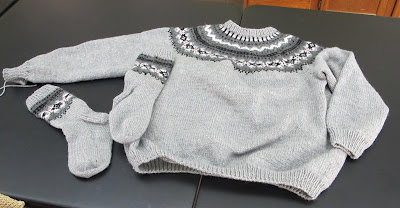