What is Sunday … the last day of last week, or the first day of next week? Most of the calendars in my house at the moment place Saturday and Sunday at opposite ends of the week, and I suppose I’m influenced by that. There’s one calendar with Saturday and Sunday on the right end that misleads me about the date if I don’t notice it’s the one I’m looking at. I’ve had French calendars that put the days of the week down the left hand column and the numbers in columns to the right. I try not to buy those. It seriously confuses my brain.

This week Sunday is a wrap up of the week ending with Easter. Sister came back to the mountains from the city on Friday to join Sisters-in-Law, a Nephew and Nephew’s Girl Friend for a Spring outing this upcoming week. With forecasts of rain. Wouldn’t you know, after our long dry winter the storm doors have opened, as the weather types say. Since I must pack, I’ll breeze backward from today to my last post. It seems ages ago to me, but it’s really not too bad.

Today Sister and Brother-in-Law and I went to an Easter buffet.  Here we are after our meal. 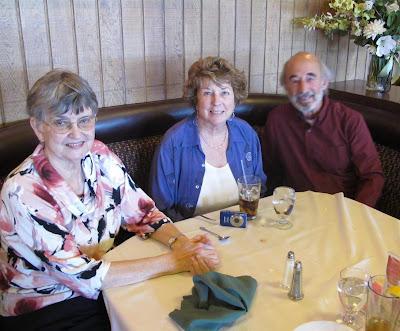 I had a very tasty Boston Cream Pie (cake?) for dessert. Forgot the picture.

I took Sister and BIL to their house after our meal, and checked on progress of the Great Car Barn Project. The rocks on the face of the upper garage have been installed. That matches the style of the existing house. All that remains to do is the change-out of some garage door segments with color-matching problems, and paving the driveways and parking area. 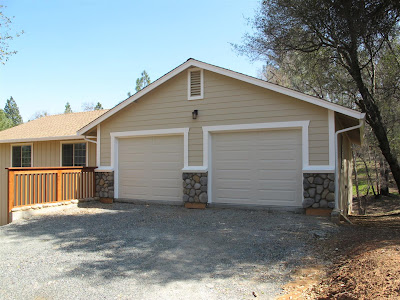 Last night I took a break to watch just one episode of Downton Abbey. I had the two remaining DVDs on hand from Netflix for the first season. Five episodes and the end of Season 1 later, I finally went to bed. No wonder I’m behind on packing and other stuff.

I also managed for the first time to watch a couple of TV shows on Hulu with only a little buffering. It makes a pretty good hit on my Internet download quota, so I'll reserve it for critical episodes missed.

Have you ever tried to catch face views of two feral cats in the same picture? I took lots of disappearing tails to get this one.


Now I must go get my clothes, which were neatly layed out to pack, back in order. There is a cat or two which scrambled underwear and strewed it across the bedroom. I told them they were bad cats. Waddaya bet everything will be further strewn when I get back there?