*
I was running late last night, unsure whether I'd get everything done and packed for the Spring jaunt today with Sister, the Sisters-in-Law (to be distinguished -- if need be -- as  SIL-T, who lives in my little town, and SIL-M, who lives down south, as in Southern California), a Nephew, and Nephew's Girl Friend. I set an alarm for the morning for 6:30, figuring I had 2-1/2 hours of things-to-do before a 9 AM departure.

When the alarm went off, I awoke remembering it was Monday. I remembered that I'd set the alarm for that time. But not why. I couldn't imagine a reason for getting up that early on a Monday morning. I hit snooze. I didn't think I needed a shower this morning anyway so surely I could sleep another 20 minutes. Ten minutes into the snooze I suddenly remembered ... trip day. Five minutes later I remembered I indeed needed to take a shower. I was on the road to pick Sister up by 9:05 and we were on the way, late by that 15-minutes-of-snoozing. The rest of the gang was in a separate car, having departed half an hour before us. (Or so we thought.)

You can guess where today's were taken, and I'll caption them near the end of this post.


Here's where we are:


1, 2 and 3: The first view out my window at home this morning, barely light out, and a surprise that the camera captured them at all. I counted 14, although there may have been more, with only the one adult buck.

4: Manzanita blossom. Ubiquitous in California, but this one is at our destination.


8: This should be your give-away if you haven't already figured it out.

Half Dome in Yosemite.


It took us a lot of the day getting people checked in and settled. Technically, check-in time is 5 PM but we typically arrive before noon and frequently get in fairly early. Not today. Sister and the SILs and I are staying at Yosemite Lodge, and the Kids have more economical digs at Curry Village. The SILs wouldn't be able to get their room until close to five. Sister and I had our little walk down by the river and the SILs searched far and wide for us along there. But we hadn't gone as far as they looked. Eventually we all got our rooms and finally later got together for our dinner.

Sister's dinner had the most remarkably green Brussels sprouts any of us had ever seen, so we had to whip our cameras out. Raw Brussels sprouts aren't this marvelous green, but it was apparently due to under cooking. Sister found a cup to put them in and nuked them to a tasty tenderness. Her other items are turkey, mashed potatoes and gravy, stuffing and cranberry sauce.


I had a late afternoon Haagen Dazs break and wasn't hungry for a heavy meal. The first thing I grabbed was a pepperoni pizza, rotating slowly in a serve-yourself warming tower. Sure, it had been in there for a while. But still, it tempted.


My sparsity of chewing surfaces couldn't cope with it very well, however. I renamed it pizza jerky. We'd been in the midst of discussion about needing some protein (doesn't a Haagen Dazs coffee almond chocolate ice cream bar have enough protein in it?), so I chiseled out the pepperoni jerky and finished that off, and gnawed on as much pizza dough jerky as my teeth could penetrate, and called it done. 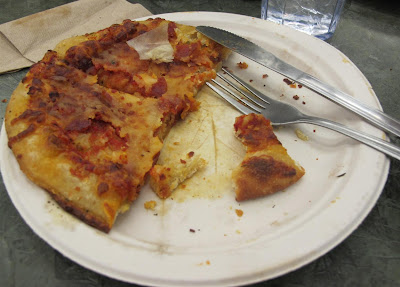 By the way, the "lead" car did leave half an hour ahead of us, but forgot something and had to return home. They arrived a good half-hour after us.