They've been saying rain is coming. I've been watching the skies for rain and I realize how much I love looking at skies. You might have noticed it in how many skies I post pictures of.  Blue skies, cloudy skies of all stripes, snowy skies, misty skies, sunsets, sunrises, night skies with moons.

As I drove up the hill last night at twilight, coming home from French class after my fourth trip to the little city in five days, I happened to glimpse left at two bright lights together in the sky. It was a crescent moon and Venus and I instantly realized how the pilot who woke up from his nap (authorized, not a nod-off) had, in that instant, believed it was another airliner coming toward them, and put his aircraft into a dive. I raced to the top of the hill to catch a chance to photograph the pair before they sank behind the hill.

One day I'll have to read the book about my camera so I'll know how to use something besides automatic settings, and maybe use helpful things like a tripod. As it was, I took repeated shots leaning on the car windshield and this is the steadiest I held it and the crescent and star most resembled a crescent and star. 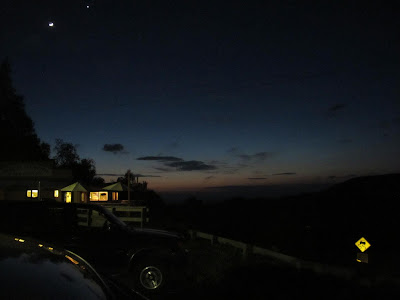 They're tiny, toward the upper left corner (click photo to enlarge), but I've left them in context, rather than cropping them closer, because it turns out I love this sky, too, and the cheery warmth of the restaurant windows, reflected strangely through my car windshield, and the unexpected illumination of the winding road warning sign on the road down the hill.


On my way into town earlier in the afternoon, I cloud-watched again, comparing them to those of the day before, which were thunderheads over the mountains and a collection of pufferbillies to the west. The technical name for the clouds yesterday afternoon is sheep-flock clouds. In all directions. 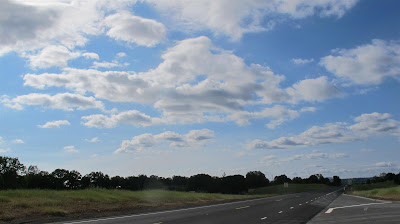 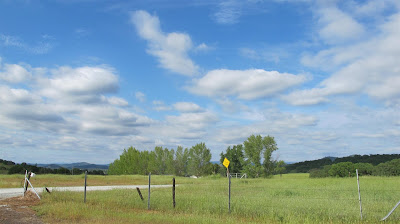 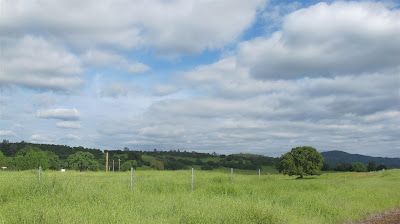 I'd left time to finalize my shopping spree before class, acquiring several boxes of my favorite granola bars -- the main dish ones in contrast to the dessert ones I'd gotten earlier -- and a box of Malt-O-Meal. It's a suitable soft meal for persons who are favoring their implant surgery. That left finding a suitable soft dinner before French class. I often treat myself to a Carl's Jr. hamburger with a chocolate malt. The hamburger was out, but the chocolate malt sounded healthy. Malt is healthy, isn't it? Chocolate is healthy. Milk is healthy. (The plus side of a chewing impairment is that I've lost 20 lbs. since the tooth extraction.)

They were out of malt powder. There went the main healthy element. But I ate it with a spoon. (Per "no straw" orders.)


The sheep-flock clouds were gone by the time of my evening picture.

Today it was gray when I woke up, but it didn't begin to sprinkle until mid-morning and then it didn't last very long.

I went out to the post office and bank in the afternoon. The skies were more promising for the prospects of rain, but it wasn't happening yet. 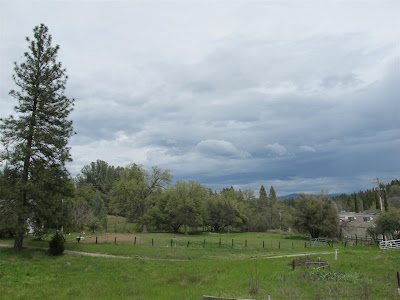 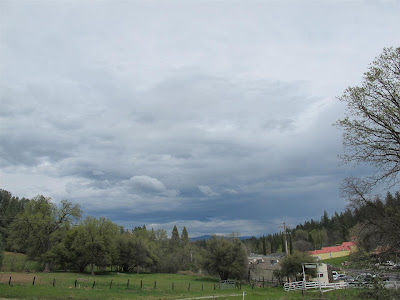 It wasn't until later in the afternoon that sprinkles began again, just after the newspaper delivery guy tossed my paper in the driveway. It was not wearing its little newspaper raincoat. (Why does delivery guy do that with weather prospects like this?) It's still sitting in its drying-out position on the stove.

That rain didn't last long either, but it has resumed tonight and seems a little more serious, while the two young feral cats are outside looking in wistfully. It would freak them and all of inside cats out if they really came in.