On The Road Home


The road home will quickly become a distant memory, as a warmish day today replaced the cool, sometimes rainy, weekend, that followed our Yosemite adventure, and warmer weather predicted for the week.

Some things I plan. (Obsessively?) Other things will be what they will be. I like my weather forecasts, so I can pack accordingly. For a trip that's just down the road like Yosemite, I put the 10-day weather.com link on my desktop and watch how it trends. I send the link to my travel companions, but I'm not sure whether they follow it with the diligence that I do. The closer we got to our trip, the certainty of rain for Wednesday and Friday rose from 50% to 100%. Forecast temperatures were also dropping.

The ranger guide at Thursday's tour said that by Friday at the same time, there would be 8 to 10 inches of snow in the valley. On an earlier trip, we'd bailed at a forecast like that and went home a day early. This time, I was not inclined to bail, and I was the driver of those of us returning to our little town, i.e., Sister, Sister-in-Law-T and me. SIL-M and the young folks were heading for San Diego. But I did consider the possibility of taking the route out that follows the Merced River, without a climb to the higher elevations. It's a longer and twistier route and I hate it. But it's an option.

On Thursday evening, my weather.com forecast, normally fairly accurate, was forecasting rain, rain, rain. The SILs all had our last supper in the Mountain Lounge and it was raining when we went back to our rooms afterward. I had my fingers crossed.

Here was my view out the window when we got up.


Like I said . . . planning for the weather. Sister and I brought this array of outerwear and vests, to accommodate us no matter what. Most of them were worn at one time or another, or lent to SIL-T, who forgot all but her tiny suit jacket. ("I have an umbrella.") 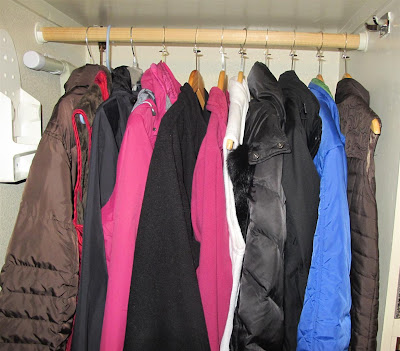 The San Diego contingent was ready to leave Yosemite for their journey home before we were. They'd checked out and done much of their packing the night before, so Sister had our final photos taken with the SILs.

﻿
Then we had our discussion about our route, including the possibility of going to the garage to have my chains installed. Meanwhile, two of us still had to finish packing.


At 9:50 a.m., Brother-in-Law called to tell us it was snowing back home. That meant snow the whole way, and if we took the river route, we might even go below the snow level and have to come back up into it. That decided me: I would go directly over the mountain to home, 6,200' elevation at the summit. Yosemite Valley is 4,000' and home is 3,000 feet. I dreaded the whole prospect of chain installation, so told my passengers that I'd prefer to go without if they were willing to trust my driving.

We got packed and loaded, then raced to clear the snow off the car faster than it was redeposited. We sat for a while with heater, defrosters and windshield wipers going until the fog on the inside cleared. I'm not sure when we finally hit the road, but here's what we were seeing by 10:45 a.m.  All photos en route were taken by Sister. The scariest part is going around corners with only three tracks in the road, i.e., both directions are sharing their left tire track and somebody will have to go into the uncertain snow to the right in an encounter. 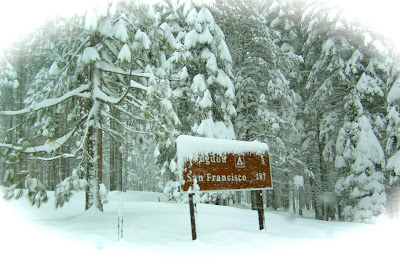 I'm not sure how long the trip took, probably at least two hours. Time feels as if it's suspended driving through all that white. I know we were slower than the normal hour-and-a-half, as we traveled below to way-below the speed limit. But I have to say about my little 4WD Ford Escape that it's steady as a rock to drive through snow. It chooses when it will go into 4WD and it chooses perfectly. I've gone into and out of Yosemite on previous occasions in snow and on icy roads as well, in this car and in my Mercury Mountaineer before it.

I finished off by whizzing up SILs steep driveway and depositing her at her doorstep.

There's nothing like driving in taxing conditions to keep a driver awake! And with Sister and Sister-in-Law to keep the conversation lively.