Falling Behind on Winding up the Week


My internet provider has been having a hell of a week. I tell them we’re out. They tell me they’re going out for repair. We’re almost on a pattern of nighttime outages, with service coming back at 8 or 8:30 a.m. This happened -- when? last year about this time? They were tearing their hair trying to figure out why. My theory was that wires were crossed somewhere. When someone went home at night and turned out the lights, it turned off the internet, too. Or a timer somewhere was going off, shorting us out.  It’s the pits. Things had been going so well -- internet-wise -- recently. 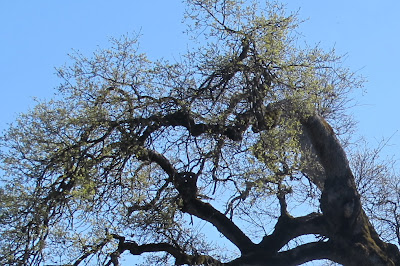 I’m sure I’ve mentioned: I’m a night owl. This nighttime internet problem is messing with my posting. I’ve had photos ready to go since Friday. I’ve been writing the text directly in the Blogger software online lately, and then uploading the photos. I realize a disadvantage to this. A few of the blogs exist only on line. Yikes! I need them in hand so I’ll know what I’ve said!


So, I’m composing in Word and this will come to you when it comes to you. ‘Tis nighttime, and my internet is down.


The seven day period from Friday to Friday went from the drive home in a snowstorm from Yosemite the earlier Friday to temperatures in the upper 80s this Friday. It was a run-of-the-mill J busy week, with a haircut, a Soroptimist meeting in a new venue, a computer club meeting, a manicure, NeedleCrafts, a walk in lieu of the Jane Fonda exercise DVD on one day, meanwhile trying to cram for the visit to the DMV.


Thursday was a good day for a walk.


There were watchers on this walk. 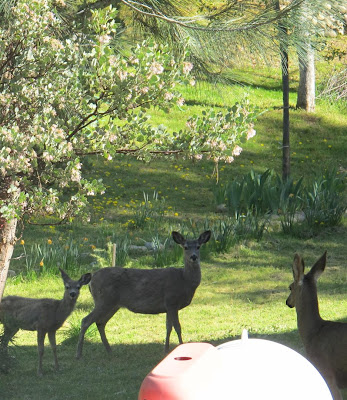 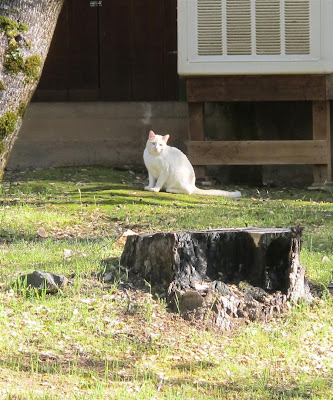 All these ladies knitting: I missed one at the far end of the table and also my own snail-like progress on my second block in the blue, white and yellow French fabric quilt. 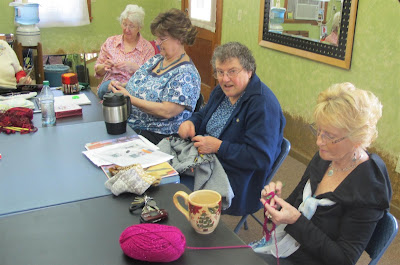 I suddenly remembered that my driver’s license has a motorcycle endorsement and it was likely that I’d have to do a written test for that in addition to the automobile one. Luckily, I thought of it at a time when I was able to download the manual for that and this gives me a chance to demonstrate the wondrous Long Reach Stapler. It’s only reaching 5½ inches here, but has the capability for 12 inches. And then there is the Senior Guide for Safe Driving. 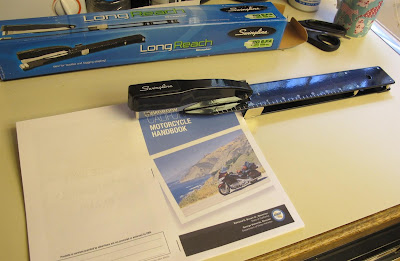 My brain was scrambled by the time I read all these. “Back in the day,” the handbook was shorter and consisted of the laws, the rules, the regulations. Something that had answers that were right or wrong. I got a speeding ticket when I was a teenager and was apparently the first female juvenile miscreant the judge had ever come up against and he didn’t want to send me to drivers’ school with all the roughneck boys. He pondered, then assigned me to read the California Vehicle Code (think an inch-and-a-half thick of fine print). My dad was assigned to test me on it.


The handbooks now have a smattering of laws, rules, regulations and lots of discussion of best practices.  A lot of the test questions are like shopping for products at Sears in the old days: you could choose from Good, Better and Best quality. In other words, a wrong is not necessarily wrong, just not the best. Knowledgeable people could disagree on some of these. 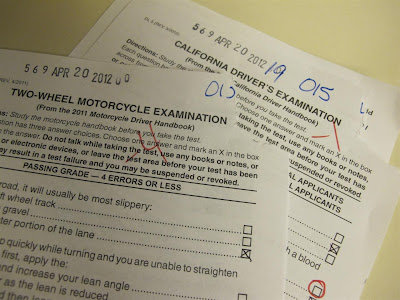 My heart was in my throat as I watch the DMV clerk marking lots of red circles on one of the tests. More than three red circles, which I thought was the limit. Phew! The motorcycle test allowed four misses. It was the general driver’s exam that had a three limit. And wouldn’t you know, I missed a question of law for my one miss. I got the blood alcohol limit wrong. I think I gave them an old timey answer. I think I glossed over those discussions in the handbook because I don’t drink and am not in danger of exceeding the limit. (Memorize those more recent limits, people.)


You also need to see a few of my large weekly supply of kitty pictures. Here Jean-Luc is watching me with his usual casual intensity.


Henley sees me taking Jean-Luc’s picture and doesn’t want to be left out. “Here I am,” he says. 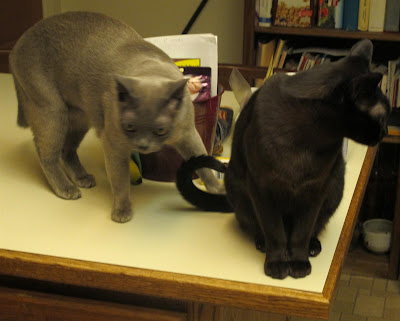 Now I relax and at last get to Thursday’s puzzles. By Thursday, the Sudoku puzzle has reached a level of difficulty I don’t get very far with. This Thursday’s was a little excessive in its assistance however. I mean, I didn’t get to fill in one number. On the other hand, I did quite well on my own with the Jumble. 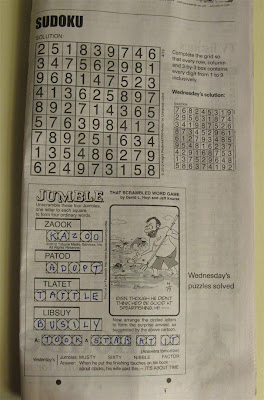 Here’s my new hat from Yosemite. My old one is missing somewhere. I’m convinced it’s at my son’s house, if I could only focus someone’s attention on looking for it. I have not mastered the art of the self-photo. I wanted more hat against a nice background of the wet-plaster bush. I call it that because that’s what it smells like. We moved into our house at the beginning of April and I kept wondering why the wet plaster smell lingered so long, especially since we have dry wall, not plaster. Each year, I’m reminded of our move here when the wet-plaster bush blooms again. I think it’s really called buck brush, although deer of all sexes munch on it without discrimination. 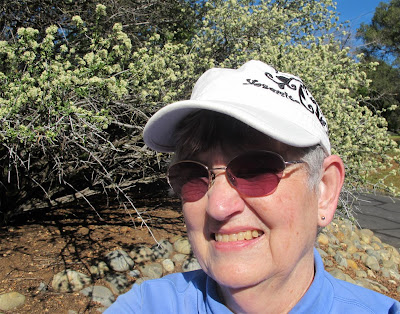