AND THE WEATHER WINNER WAS RAIN AND SNOW


Photos were ready, and I was about to upload them and write about my Wednesday in Yosemite, when something happened to my Internet connection at Yosemite Lodge. I blamed the Lodge system for the rest of the evening and things were still amok Thursday morning and I discovered Sister wasn't having any problems. From the symptoms, I was afraid I was having a hardware problem with my wifi card. Most of the "Troubleshooting" steps involved doing things that were beyond my control, so I just kept selecting "try something else," and at some point Facebook popped up, despite dialogue boxes to the contrary indicating that the problem was not solved. I love it that something worked, but frustrated that I have no clue why.

Sister and I were a bit late for breakfast, so much so that we entirely missed the SILs there until we rejoined them afterward to go to the Ahwahnee Hotel to meet Nephew and Nephew's Girl Friend for lunch. Apparently, after her own puddlely walk to breakfast, SIL-T had put her shoes on the heater to dry and now the soles had --um -- been cooked off. With much arm-twisting, SIL-M persuaded her Sister to wear her boots.

Sister and I, in a fit of overkill, had brought four jackets each, plus I had two warm vests and Sister purchased one vest on our shopping trip the day before. (Very big at preparing for all contingencies.) So MY Sister persuaded SIL-T to wear one of her warmer coats over the cute little dress jacket which was all SIL-T had brought along. (I hope you can follow all these "hers.")

Before we got to lunch, we had a mission en route to find SIL-T shoes at the very least and boots if we could convince her, in light of the snow forecast for the day.

We weren't successful until our trip back to Yosemite Lodge after our interlude at the Ahwahnee. 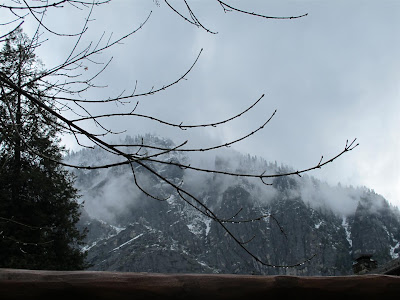 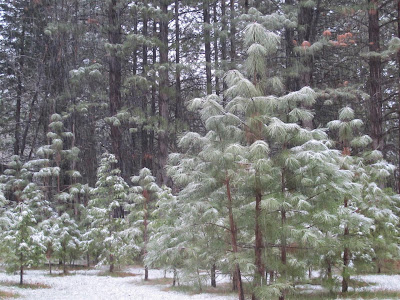 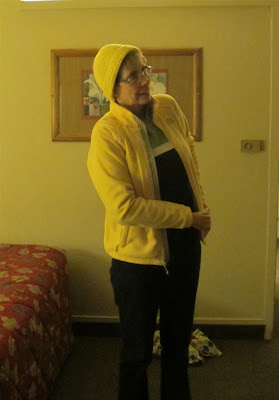 After which, the Internet went kaput, at least as far as I was concerned. Tomorrow I'll give you another meal at and a tour of the Ahwahnee. By the way, our tour guide said 8 to 12 inches of snow is predicted for Yosemite Valley on Friday. To use an old family expression, the trip home may have to go all around Robin Hood's Barn, rather than up over the usual route at 6200 feet (1900 meters). I'd love to hear whether anyone of you is familiar with that Robin Hood's Barn expression.


See you when I get home!