By way of illustrating the theme, I took my shower and got dressed at seven -- in the evening! I only did that because I needed to go into the cold garage to transfer kitty litter from a too-heavy bag into a manageable bucket, a task which ultimately took less than a minute. Cat experts advise having one more litter box than the number of resident cats, so with three indoor cats, there are four boxes to maintain. Ever the fun job. Somehow I managed to spread it over hours, finding an urgent distraction between each box.

Saturday mornings will, for the foreseeable future, if not forever, involve a routine that will consume perhaps an hour. I must fast overnight, no food, no liquid, take a pill (to improve bone density, the generic for Fosamax if you're interested) with 6-8 ounces of water after I get up, nothing else, remain sitting or standing upright for half an hour before eating. If I don't take it this way, it won't work. And there can be bad side effects. I must eat before lying down again. (I put the detailed instructions somewhere safe.) Before I start the pill routine, I need to get all the cats taken care of so I won't be doing things like leaning over to give them food during my pre-eating period. 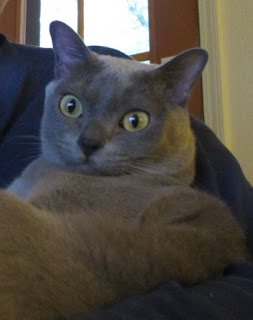 Chloe gets her pill, crushed in tasty food. The boys get morning treats, to make up for the fact that they don't get that fancy food from cans. They get bedtime treats as well to get them into the kitten room for the night with fewer protests.

It poured rain most of the night, with possible hail, but I was still pulling for snow. The outside cats' living space was a mess. Water had puddled in the tarp cover, which had in turn exposed the cat bed under it to rain. I emptied the tarp and pulled out the bed, which had leaves and stickers and other dirt in it as well, so I didn't want to throw it in the dryer. Machine washable? We'll see. There was water in the food bowl, too, so I took it in to wash and dry. Boots (or Socks ... I always forget what I call her) came straggling up from under the deck, very damp around all the edges, and a hungry girl.

I take my pill. Jean Luc relaxes in my arms while I spend my half hour reading email and Facebook and blogs. I have hundreds of ignored emails that I start to delete. I could delete all day and they would not be gone. The half hour passes quickly and I head for a fresh cup of coffee, orange juice and combo cereal. (Get out two boxes of cereal. Mix in a bowl before eating.)

I see snow flakes coming down and run for the camera. 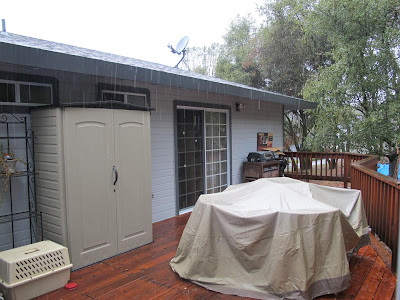 It's still snowing. I take time to post this "Whoopie" photo on Facebook. Weather reports are coming in from all around the county. "My snowflakes are bigger than your snowflakes," my friends say to each other. 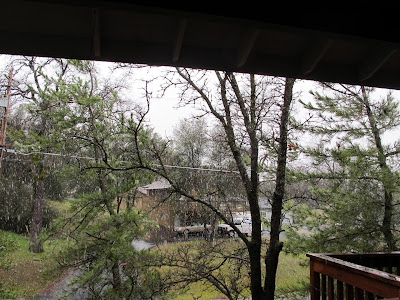 Here's what I'm hoping for.


I'm distracted over and over. My son posted a picture of himself with a lovely woman on Facebook last night. He doesn't answer text messages or emails and hasn't for several days. Daugher, his sister, isn't answering her email either. Does he have a girl friend? Sister emails me with the same question. I like the way she looks, but I don't know the answer to this important question.

I clean a litter box. Then I'm hungry again. I can't find Henley cat. I call and call and search all the usual places. I have a few moments of panic as I fear he escaped in one of the brief moments I opened a door for a snow picture. I shout for him out each door. I finally find him hunkered under my bedside table, over a heater vent.

I do another litter box. Eat some more. Clear out more emails. Look out the window. My snow has come to this as rain and snow alternate. 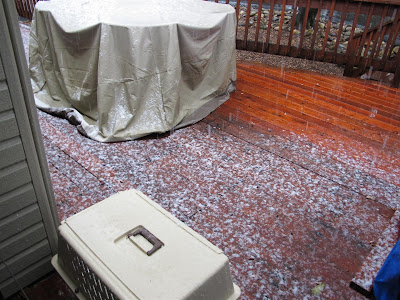 I get that shower and I eat dinner, watching something I've DVR'd. I nod off and have to repeat several scenes. Henley climbs into my lap. One of his eyes is weepy. I don't think he feels very well.

I'm back at the computer. There's rattling at the door and there is Stripey and now there's this!

I get him some food and hear a loud thump that almost sends him/her bolting away. Bootsy has jumped down from on top of the wood shed. That seems like a good place for her to be somewhat out of the weather and out of the reach of dogs and racoons. I think the ferals also hide under my truck on the far side of the garage. I feel bad that I don't have better accommodations for them. This may be their first snow since early kittenhood when they were under the care of their mother. 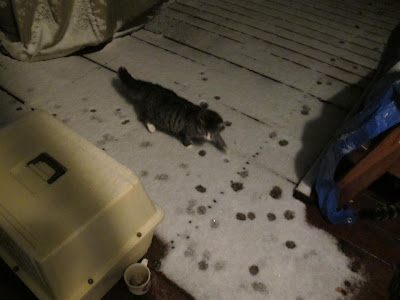 Boots skitters in for food, too.

Now at bed time, Stripey is still begging for food. I don't see racoon tracks in the snow, so he/she must just be a hungry kitty. Tiny snow flakes are falling. Henley is glued to the heater vent and Chloe is giving me "the look." Time for her nighttime pill in its tasty food.