Thursdays Out . . . with Leftovers


Choices, choices.  By dinner time Thursday I had the choice of two batches of leftovers. Sister and Brother-in-Law have been making lots of trips -- not always at the same time -- between their town house and their mountain house, what with monitoring construction on the Car Barn or Grand Garage or whatever the sobriquet of the moment, and tending to various appointments. Both were in town Wednesday evening, so we went out to dinner.

We've been scolded in the past for showing up without reservations, so Sister duly made reservations for 7 PM. We arrived just as the early eaters were clearing out. We were the only ones there for the late shift. Same thing happened when we went for pizza after some big event and the pizza place was closing. Stylish dining is out in the winter. We are not 5 PM people. Still, this time since we had reservations, we were welcomed and attended to.

Sister and I ordered clam crab cakes. They're from the appetizer menu, but if you get your own, they're plenty. They're sooo plenty that we each took half our orders home. They are also a fine choice for a person missing certain chewing teeth. 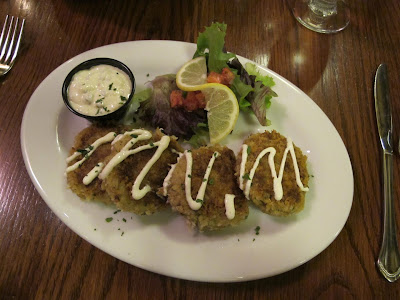 Even BIL, who knows he's full when he starts sneezing, began to sneeze halfway through his prime rib. We ordered doggie bags for all and and waitress started to take away dishes and bring our check.

I assume since you all took doggie bags, you don't want dessert.

Wait wait wait. We can't assume that. We at least need to see the dessert menu. (Does one suspect we ate half a dinner to leave room for dessert?)

Sister and I split a tiramisu. It's very light. I'm sure there are no calories. BIL had a cappuccino. Leftover set #1. 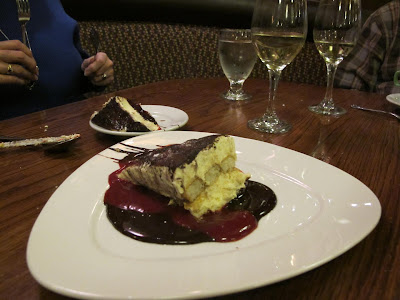 A computer class on PowerPoint had been scheduled early Thursday morning at The Little House, something I'd like to learn about, but too few signed up to make it a go, so I didn't show up until time for NeedleCrafts.

Our NeedleCrafts ladies had been busy between Thursdays. Three different fancy sets of sox are in progress. 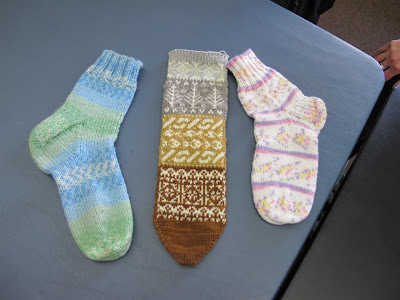 Sandy's sock (L) and Barbara's sock (R) use yarn that creates the pattern automatically. This concept dazzles me, the non-knitter. (Well, we won't mention the flamboyant pink sox I knitted as a teen that were made with nylon yarn without an iota of stretch. Not comfortable. Nor the dishcloth that was more of a triangle than a rectangle.) Rose is working on the Fair Isle sock in the center (it still has some trick work to do to create a heel), in preparation for doing a Fair Isle sweater. I don't really know what that means, except that she knitted each color in from separate balls of yarn, so it's way more complex than automatic yarn.

Senior lunch at The Little House was billed as turkey sandwich, but it was a full-fledged turkey dinner, with the slice of bread under the turkey and dressing as a nod to the billing. Then there were mashed potatoes and gravy, mixed vegetables and cranberry sauce. There's a bowl of fruit I haven't opened yet but someone told me it's apricots. I think I ate less than half of all that. Honestly, my tummy doesn't think "full meal" at lunch time. Leftover set #2.

I'm still campaigning for winter. Thursday didn't do it, but there were some big dark clouds to the east, only our weather generally comes from the west. I scouted around for a clear vista to the east. I found a hill. The vista wasn't completely clear but here's a sample. 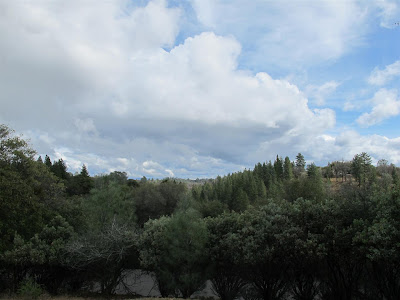 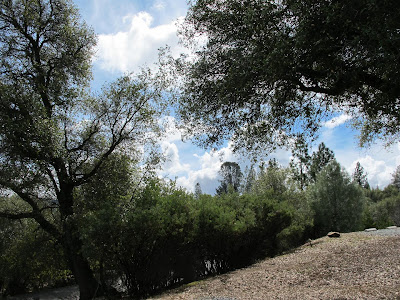 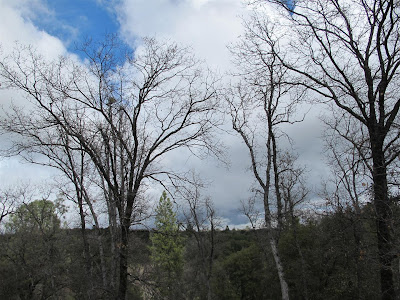 I think the middle of the runway at the airport may give a good view to the east, but I doubt that photography from that vantage is encouraged.

For dinner I opted to finish the turkey. That piece of bread under the turkey didn't seem like it would hold over very well for another day.

It's Friday morning now and it is raining. But it's too warm for snow. I have crab cakes for dinner tonight.