Well, darn. I already slacked off and missed a day of daily blogging. I didn't plan to miss it. In the face of a distractions, I failed to resist. On Saturday evening, Brother-in-Law pointed out this was the weekend for the monthly community breakfast. Always eager for a good breakfast that we don't have to cook (in my case, I'm out of frozen waffles), we set a time to go on Sunday morning. I picked Sister and BIL up around 9:45. We were all bundled up for the usual morning cold, only it wasn't. It was a beautiful, balmy day. Pancakes, eggs to order, bacon, coffee or tea. Didn't notice juice, since I'd had some before leaving home.

After breakfast, I took pictures of BIL's Great Garage Project. It's in the home stretch now.


Then came a major distraction. Homework for French class. I'm assigned to report on Saint-Malo, France. Well, actually I chose this topic among those offered, but I selected it because I have photos. Having photos leads me to browsing through photos and then selecting photos. As I browse I'm also on the lookout for monthly photos that I include in the sidebar of this blog, and for "cover" photos for my Facebook page. So this can take quite awhile. I can figure out ways of rationalizing this as NOT slacking off, but the fact is that I'm not writing. I forget to write something in French about Saint-Malo, but since the prof doesn't let us read anything we've written in advance, and I'm not able to memorize things, I probably will have a few English crib notes and try to translate into French on the fly. (I notably make funny mouth noises with lots of gestures and body language to fill in language gaps.) 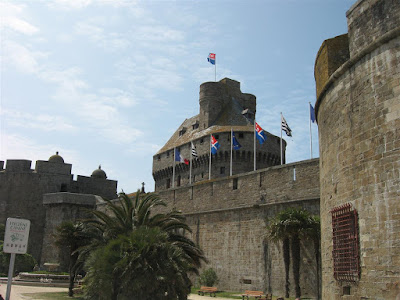 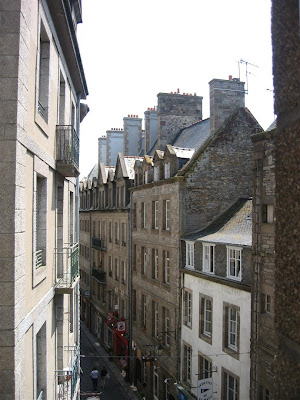 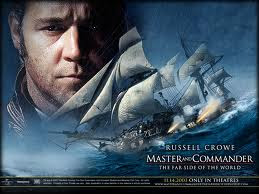 I need a little break from the computer at this point and ponder watching a DVR'd show, but I'm uninspired. There's been an unwatched Netflix movie sitting on the TV stand since (I look it up) July 21 of last year, so, inspired by Saturday night's spontaneous movie watching at Sister's, I pop in Master and Commander. And open and sort mail as I watch. The cannons and the stormy waters in the battle scenes about blow me out of the room through the surround sound. I had the volume turned up to decipher all the English accents and had to turn it back down some of the time.

Then before it gets to dinner time, I do my exercises, which hurts. I'm not convinced that I can exercise my way out of this pain, but doctors keep telling me I must do it. And I do need a better level of fitness for summer travel.

The final distraction of Sunday is that I want to watch "The Good Wife" with some attention, not from the computer chair, eight o'clock in my market. And I fall asleep. I don't know how it ended. I may not even have a clear grasp of some of the middle. I'll see Sister tomorrow. Maybe she stayed awake. Final backup plan is that a friend DVR'd it, so I'll have to go to her house before she deletes it.

When I wake up realizing that the show is over, I'm exhausted. I can't put two thoughts together. I manage to read a few blogs, then go to bed and read a few pages in the strange book at hand, The Hitman's Guide to Housecleaning. To bed, early for me.

This morning  I realized it would be a good idea to attend to my bills for awhile. Then there's an afternoon class on MS Word at The Little House that I assist with. Frankly, I'm a Word learner as well, and Barbara pointed out many cool tricks today, functions I search all over to try to do but not self-evident to someone who didn't start with Word as her word processor all these years and loves Lotus Word Pro. I won't go into all the reasons I'm trying to force myself to change, but when I have to get something done the way I like it, I revert to Word Pro. Alas, Lotus 1-2-3 doesn't play well with Windows 7, although it may be the 64-bit thing that makes them spit at each other.

So here's our intense group, practicing those neat tricks Barbara showed us. 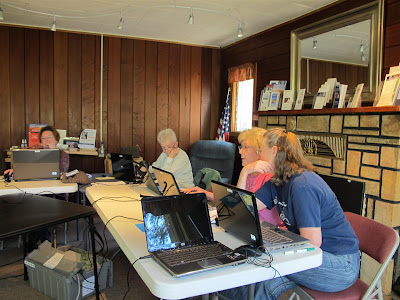 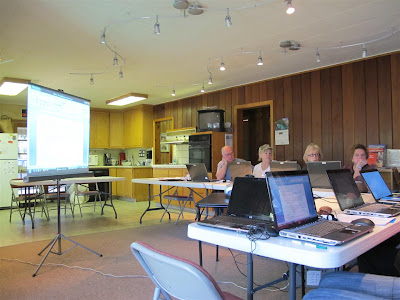 I even exercised before dinner today, even though I was sooo stiff already.

Then, just because I found this neat screen hiding behind several windows, I'll end with one more nod to Master and Commander. 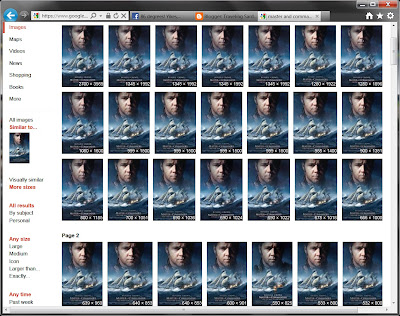