A couple of months or so ago, I fried a scrambled egg concoction that kind of burned and stuck to my beloved stainless steel frying pan (you know, those black charcoal baked on spots), the pan I use for my corn and salsa omelets, the pan that can be put under the broiler to puff the omelet up.

So, still cross from having to attack my favorite pan with SOS pads, I fell for a TV ad for a frying pan that scrambled egg goo absolutely, positively would not stick to. I could get this marvelous frying pan for a low, low price, plus a bonus glass lid for only Shipping & Handling.

There's almost always a website where you can order "as seen on TV" and just click no on the second frying-pan-with-glass-lid free for S & H. I logged on.

Did I go to the user reviews before or after I pressed "buy?"

That's foggy in my mind. I think it was just after, when it was too late to rescind the "buy."

Well, lots of people complained that they had not received their pan, got the runaround when they tried to track it down or were treated rudely, that it didn't arrive for months, that when they received it, the glass lid was unassembled, had tiny parts that were awkward to handle, and there were no assembly instructions, and it was near impossible to put together.

On the other hand, the frying pan performed, the reviews said, exactly as advertised. Those gooey scrambled egg remnants were history.

I hunkered down to await the delivery, hoping against hope that there would be no need for frustrating phone calls that include 9 menu choices, none of which describes the purpose of my call.

In less than a week, a compact box was delivered directly to my door. I put the box on the chair beside the door and breathed a huge sigh of relief.

And then let it sit there for a month-and-a-half, not wanting to get involved in the glass lid assembly morass.

Finally, in early March, I opened the box as I was decluttering the living room for my cleaning lady. It was a nicely fitted box, with the lid assembled. I cannot imagine that this was a "bonus lid;" it was clearly intended to be sold together with the pan. I washed it. Dried it. Read the instructions. Set it on the stove top. 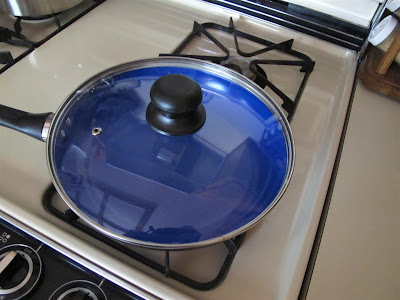 It doesn't sound like stacking it in the pile of frying pans would be good for its health.

For its maiden voyage, I did easy-over eggs. The eggs came out fine. In fact, it was more difficult to clean off the cooking spray than the egg.


The other day I did a frittata.

(Let's see -- I think I put a handful of frozen petite corn in the pan with a couple of pats of butter and simmered until the ice was melted, added a meal's worth of leftover combined brown and wild rice, medium salsa that I'd drained so it wouldn't dilute the egg, and grated some cheese into it. Stirred it up then poured two lightly beaten eggs -- with a tad of water and salt -- over the mix in the pan. Covered it -- notice the pan lid has a steam escape hole -- and cooked until done.) 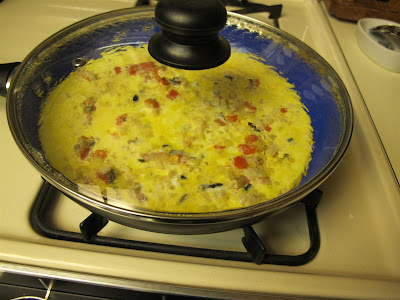 It puffed up nicely but collapsed the moment I lifted the lid. 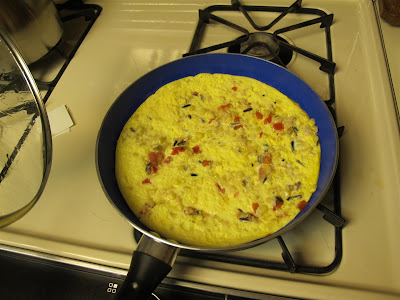 Do I like it? It works well for stove top cooking. I'll use it for gooey concoctions. It can't be put under the broiler like my stainless steel pan. It is not very large, so it's not really for a family unless you're doing the short-order-cook thing.

This would have been a good deal without the shipping and handling. As it was, it came to $38.43. I've often seen products "As seen on TV" in certain sections of department stores. If you like it, maybe you should try there first.

One final thing -- there's been a HUGE uptick in the amount of s p a m I receive, and I'm not referring to the canned meat product that some people apparently love.