The pattern continued all day, and from what I have gleaned, all over the county, even at lower elevations. It's sunny ...no it's snowing ...now it's raining. Stir and repeat. I wonder if it would have felt so cold if it weren't for the past two balmy days. Later this afternoon when I drove down to the little city, I could see ranks of clouds out to the horizon, some with angled black sheets of rain dropping below them. There were huge clouds above with smaller puffer billies skittering below. The road down doesn't give much opportunity to stop for pictures, so I missed the best vistas, but here's a little sample. 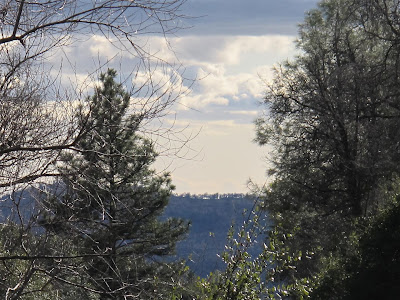 But that's a bit later in the day. I did not get out of bed all that early today. I don't know what time it was in the wee small hours of this morning that my Kindle finally fell to my chest, the sure sign that it's time to go to sleep, despite being at the 96% point of the book (The Hitman's Guide to Housecleaning) and our anti-hero being in jeopardy of meeting the same fate he dealt to others. Maybe tonight?

This was Soroptimist Tuesday and Sister went with me to the meeting. One of our members presented some findings about transportation needs for those of us living on our hill who are unable to drive. We had three young women from the high school who presented us with a plaque and a certificate for the support the club has given their volleyball team, and reported to us about a leadership training they'd attended.

When I dropped Sister back home, I said "howdy" to Lola and Healy, 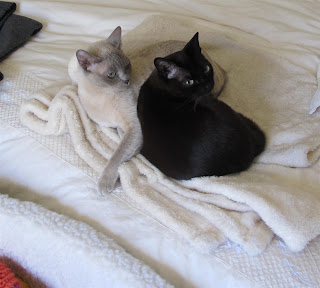 then caught the latest updates to the Super Car Barn.


I went home and gathered together "stuff" to take to my French class in the aforementioned little city, first stocking up on the giant bag of cat food (filched by raccoons who slime the food bowl and dirty the cat's water) and a big bag of coffee.

It took some effort to buy mascara. This may be my last ever shopping trip for it. Someone gave the safety lecture on TV the other day that mascara should be replaced every (mumble mumble) months. I don't remember how many, but it's a whole lot less than would add up to the several years that my current tube has probably been in my kit. So . . .

My requirements are simple: don't want the kind in the bulky tube that would weigh down my luggage; need waterproof and non-running for the frequent crier; black-brown because black doesn't match graying hair; not the high price model. Do you know where they display those? On the very bottom hooks, three inches above the floor. There's only so long I can squat down trying to read the labels, so I abandoned one store before I could find out whether they had what I wanted. The next store at least had a carpet, which was a lot softer to get up from. And success.

Then it was off to French class.


(Prof, if you want a link to your website here, let me know.)

One member gave his report on Mont Saint-Michel. Alas, we didn't have time for mine. (Awwww!)


The worry always in going out in iffy weather at night is that the shortcut home can be closed in inclement weather, and I'm terrified to drive the regular highway at night, in any weather. But when we left class, the full moon lit the countryside and stars sparkled overhead. My cup of coffee with dinner kept me alert and it was a lovely ride home.