What about "Neither a borrower nor a lender be; for loan oft loses both itself and friend, and borrowing dulls the edge of husbandry"?

Whether you knew they are from William Shakespeare's Hamlet or not, they're certainly familiar, and during the performance playing now through March 18 at Stage 3 Theatre Company in Sonora, California, there'll be many more "aha" moments when you say to yourself, "so that's from Hamlet." I wonder whether there is another work in the English language with this many familiar passages?

Robbie Smittle ROCKS IT as Hamlet. 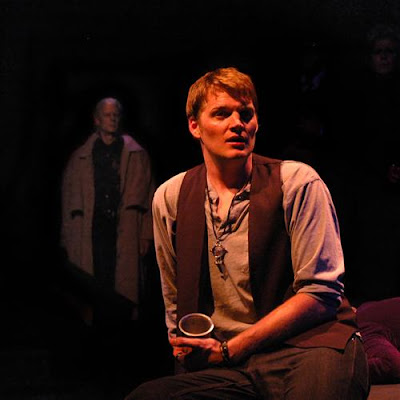 Photos from the Stage 3 website
Information from the Weekender (Union-Democrat, Week of February 9)

When asked for one word to describe his experience playing the title role, he answered "Passionate. It's also romantic, surprising, antic, athletic and harrowing. I've been studying this play for 10 years and until I'm 80 I'll find something new."

Stage 3 has boldly presented Hamlet as it 2012 season-opener, described by Artistic Director Don Bilotti thusly,  "This is our first foray into Shakespeare. 'Hamlet' is the big fish and we're going out to deep water to get it. It's an exciting opener to our 2012 season." 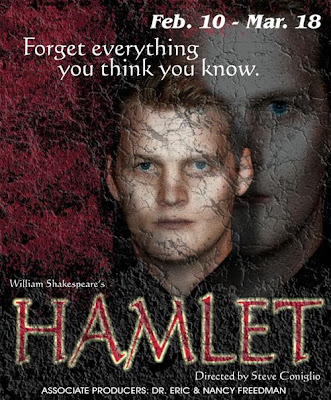 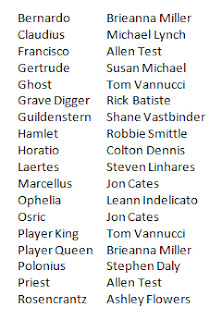 Director Steve Coniglio set himself the task of presenting a production which is lean, muscular and above all, fresh, clear and moving. "For those familiar with the play, we will provide interesting twists of perception, time, and motive; without altering the core or the words of Shakespeare. Guaranteed: moments of 'I've never seen it that way before and 'I've never thought of it that way before.' For the uninitiated, we've designed these moments not to confuse but to serve to enlighten the understanding of the play." 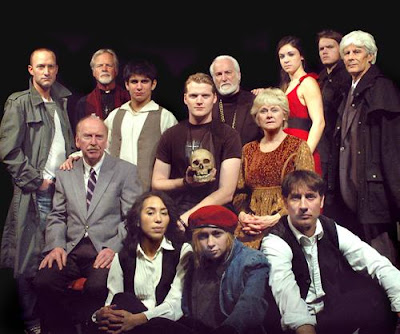 I recommend this interesting production, but unless you're flat-out up-to-date on the characters and intricacies of Hamlet, I also recommend taking a look at a summary before going (wish I had thought of it), such as this one at SparkNotes. And I'll remind you that this is one of Shakespeare's "tragedies," so don't expect a happy ending, although it may be considered "justice done."

Up front, I like Shakespeare, with no expertise in the subject, in theatre, nor, for that matter, in literature. I'm not sure whether I've seen a live theatre performance of Hamlet before this one -- I probably did back in the mists of time -- but I have seen various productions on the small screen.

How did this "like" happen? Merchant of Venice and Julius Caesar" were obligatory works to read in California high schools back in the day. Being a bit of a contrarian as a teenager, I liked them.

Then I went off to a college with a noted summer Shakespeare company and festival.* The staircase to the main entrance to the college's main building was converted to a stage each summer. The boy I started seeing (who became the man, my husband) had a part in Macbeth as a tree in Birnam wood.

For the summers I was on campus, I attended those Shakespearean plays. Once we moved away from our college town (I managed to linger there for nine years), opportunities to see Shakespeare in live theatre haven't been exactly plentiful. Being the saver (hoarder?) that I am, I have all my calendars since 1983, plus 1975 and 1976 (where oh where are 1977 through 1982?). Although I attended many plays by the San Diego Repertory Theatre company between 1978 and 1988, I only noted two play titles in the calendars, "Quilters" (not Shakespeare but notable for spurring my interest in quilting), and A Midsummer Night's Dream.

I know I also saw Coriolanus there, having persuaded my husband (the second one, not the Birnam wood one) and several friends to go together for an evening at the theatre. Husband and friends bailed at intermission. I stuck it out. Although I was grossed out at the free use of severed heads in this play, I was (and am) still the contrarian I was in high school English. I wonder now whether, after watching maggoty and dissolving corpses and lots of severed body parts over dinner with the likes of Bones and the CSIs, my sensibilities have been somewhat dulled, and I would spend less time looking between my fingers at faux severed heads?

At least after retirement I recorded play names in my calendars. My poor second husband, never a theatre fan, who had attended with me over the years to protect me from any seedy characters that might be lurking in parking garages or gritty city streets while walking to the theatre, begged me to excuse him from theatre attendance in our smaller and safer towns. To tell you the truth, it's more fun to go to a play on your own than to worry during the play that your companion is hating  it.

I began attending performances put on by several theatre groups in my new area, which, without going into a complex family tree, have included Columbia Actors Repertory in Columbia, Sierra Repertory Theatre in Sonora and Columbia, Mountain Actors Conservatory in Sonora, and Stage 3 Theatre Company in Sonora, during which I have seen perhaps three other Shakespeare productions. More, certainly, were offered, but not always at times I could attend.

During some turbulent years, my college fell on hard times and was ultimately closed down. But more recently, a determined group of alumni has brought about a renaissance of the college and students are now in residence. I attended a reunion during the early years of this effort and saw a lively and bawdy presentation of Romeo and Juliet there by young actors. Although it (still) didn't end well for the lovers, I suspect it had a more Elizabethan sensibility than many productions.

*Meredith 'Dal' Dallas and Arthur Lithgow founded Antioch College’s Shakespeare Under the Stars in 1952, where they both acted and directed on a stage constructed against the massive stone steps of Main Building. Between 1952 and 1958, a company of professional actors, students and villagers presented all of Shakespeare’s plays. This was the first time in the United States that all of Shakespeare’s plays had been presented one after the other in one location. See a 1955 account of this, in the era of my first year at college, in the final photo.

"This above all: to thine own self be true,
And it must follow, as the night the day,
Thou canst not then be false to any man."


"Something is rotten in the state of Denmark."


"Brevity is the soul of wit."


"Though this be madness, yet there is method in 't."

"The lady doth protest too much, methinks".

"The rest is silence."