The little sun icon on Friday's weather forecast for Yosemite Valley showed a few clouds drifting over it. Sister-in-Law and I had our fingers crossed for a nice day, with extra hopes for a clear evening to take a shot at this phenomenon: 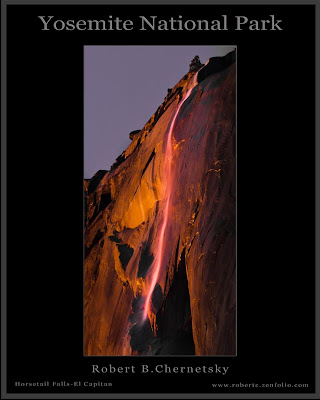 For a few early evenings in February, the sun hits an area of the cliffs beside the well-known climbers' challenge, El Capitan, and gives a particular luminescence to a small waterfall, Horsetail Fall, that fragilely flows over the edge, giving the illusion of a firefall. Any clouds drifting over the sun extinguish the effect. Sunset would be at 5:45 on Friday. We were cautioned to allow plenty of time to park, walk, and get set up.

I had another photo goal as well. I wanted my own picture of the temporary repair to the road that had been damaged by a rockslide in January, before the road closes next Wednesday for six weeks to make the permanent repair. That was another part of choosing a Friday visit, rather than get into a higher-traffic weekend.

That theory seemed to be working. There was scarcely a car on the road.

Until we came to the road repair. At which point a small car traveling at a high rate of speed came screeching up behind me. The good parts of this road are a conservative two lanes wide; the repair area much narrower. There is nowhere to stop, except mid-lane, and an upward-bound car to discourage passing. So I stopped -- briefly only, as I could see steam coming out of the ears of the driver behind me -- while Sister-in-Law thrust her camera out the window and clicked. (One day I should try to PhotoShop the ugly antenna out of the center of the photo!) 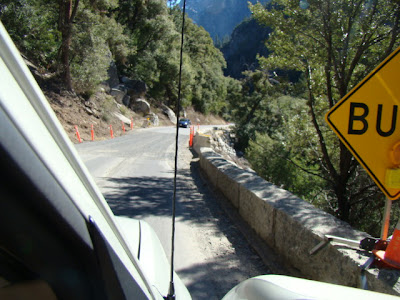 Kind of small-looking for something that will take six-weeks to fix, huh? I'm taking it that there is a lot of vertical damage to the right-of-way, more than just this little piece of roadway. Then Mister-in-a-Hurry continued to follow along behind even when we got to the valley floor where both lanes are inward-bound. Passing zone, Sparky. (Not the last driver enigma of the day.)

But I'm getting ahead of myself on this journey.

There's a pullout on the trip into the valley with a first-good-view of Half Dome. With as many trips as we've made to Yosemite over the years, you can guess we have a boxload of Half Dome photos. Nevertheless, it was so clear and beautiful that we pulled out. Just one more, n'est-ce pas? I tried one of those self-photos with Half Dome in the background. I missed us both. I did better with the traditional Half Dome photo.

We were both rubbernecking to see whether there was water flowing in Tamarack and Cascade Creeks as they pass under the roadway. Not much water seen in Tamarack but there was quite a bit in Cascade. We backed up to a parking area for these pictures.

It's shortly after this stop that we pass the patch in the road, then it's just a short distance farther to the intersection with Highway 140 entering the Valley. We still have a bit of a drive to get to the populated portions of the valley.


Where shall we go when we get there? we ask each other. We decide in favor of the Ahwahnee Hotel . . . it's nearly lunch time and we might try the Ahwahnee Bar to see if any of the menu choices appeal.


We spent at least an hour of the glorious afternoon in wicker chairs on the patio, watching the world go by and warming ourselves in the sunshine. (Just like our cats do!)


We finally stirred ourselves off our comfy seats to make the rounds. We went on to Yosemite Village, checking out the Village Store first. It is undergoing a makeover. SIL immediately missed the giant bear (yes, I think it's a real one, although stuffed) that has graced the store from time immemorial. "He's off having some relaxing spa treatments and enjoying himself," explained an employee. (That's their story and they're sticking to it after one employee told a child that the bear was in the hospital, at which the child burst into tears.)


We also took a turn through Yosemite Lodge, since it was en route to the day-end photo shoot. We took the time to savor our favorite Haagen Dazs ice cream bars. (It's a Yosemite tradition.) Yummmmy.

Then it was off to find a parking place for the photo shoot. We found one and took a short tramp through woods to find a clear view of Horsetail Fall. Old time aficionados were already staking out their spots as we arrived at 5-ish. Sunset was due at 5:45 and the window for best viewing can be variable.


When we got back to our car, we could see that the right lane of the road ahead of us had been closed down for parking for quite some distance. Crowds were returning to their cars, crossing the road, opening doors in traveled lanes, and making other unexpected moves. I was trying to proceed slowly as befit the situation and was almost hit twice by cars that came barreling up from behind, lane-switching, not even slowing down. (A$$holes!)

We made it home intact, thank goodness, and by that time, sleepy.

Going back to the most recent Thursday Out, we had a good group at NeedleCrafts. Sandy had this almost-done baby bunting for a grandbaby. 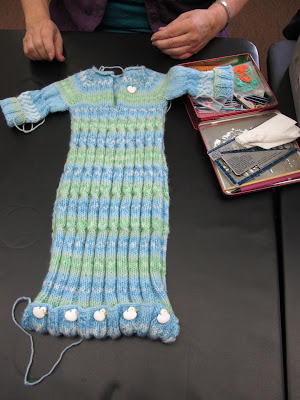 Darn. I neglected to get a picture of the big pile of colorful fabric wallet/cardholders Barbara is making for an upcoming craft faire. A few of our regulars were missing for various reasons such as travel, surgery or family matters. It's amazing that a few months ago, we would have said, "Wow, we have NINE here today!!!" How times change. This week we said, "Only nine? Where is everybody?"


For those of you holding your breath about what happened at my visit to the doctor on Wednesday: My cholesterol report was mixed. Overall cholesterol has improved. One part of the cholesterol score has improved but two parts worsened. I forgot to get a copy of the report, so I can't tell you which ones. This result prompted me to study the Nutrition Facts on stuff I was consuming that day.

﻿﻿
I guess I'll have to eat more Cheetos and less . . . well, I haven't figured that one out yet. My vitamin D is too low. I've already been taking a bunch of it, but now I'll toss another of those cute little capsules from Costco into the handful I take. The doctor provided a third opinion on how long I must remain upright and unfed after taking a bone-strengthening med, which is supposedly en route from the mail-order pharmacy. Opinions I have received range from ½-hour to an hour. It strikes me that this should have a factual answer, not an opinion.  (Hello, manufacturer's voluminous insert.)

I can do this. Just stick a computer in front of me and I'll be lost in time.