I just went out to pick up my newspaper at the end of the driveway. When I turned around to return to the house I saw red streaks in the sky, largely hidden by the bulk of the house. I'd been oblivious to the glorious skies unfolding outside my little cocoon in front of the computer. I gave a quick pat to the friendliest feral cat who followed me to the back door, raced for my camera, and quickly exited to the front deck to capture the red light before it faded.

How many of these do I miss? 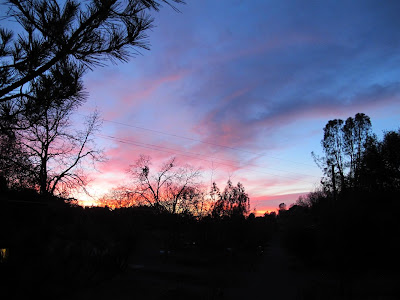 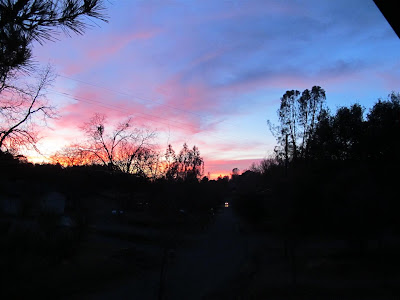 I hadn't planned a blog for tonight. It seemed as if it had been completely quiet around here, nothing happening, a long stretch of nothing for days on end. Sheesh! How quickly I forget. Off-loading my sunset photos was a memory-jogger. Earlier today I'd been at a lively Soroptimist meeting, where, for example, there was momentous news that the hotel where we hold our meetings has been sold, and rather quickly at that. Lynn, the current owner, said that when she and her husband decided they wanted to move on to something else in life, she figured it might take three to 25 years to sell it. But it didn't! For six weeks this news has been a closely held secret, but now there's a legally-required 30-day change-of-ownership notice hanging in the window. Wowser!

Here's a picture of Lynn and the Honorary Mayor of our community, Goose, just after he had been elected for the second time last fall. (The candidate with the most bribes wins. Should I cynically say "just like normal?") 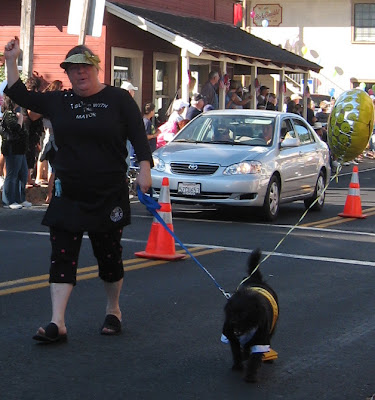 Our relationship with the hotel will continue as before. I'm not sure about Goose's. He plays piano there for the entertainment of the guests. Today's plan for the about-to-be-former hoteliers is to start a blueberry farm. Someone helpfully pointed out that our Soroptimist prez has a ranch/farm for sale. Gosh, could it be any more convenient?

I've stopped by my Sister and Brother-in-Law's place a couple of times in the past few days to take photos of the Great Car Barn construction project's progress for them. They've been out of town this week. In case she wants to blog it, she has first dibs on publication.

And it was just yesterday that I helped Barbara with a class on Facebook held at The Little House, our local senior center. I took pictures. If you recognize any of your friends here, you might try Friending them in a while, after they've had time to absorb information from the class and follow the series of tutorials they can do for additional self-study on the how-to-do's.


The rest of the week does not lack for excitement. Tomorrow, I will find out whether my cholesterol is up, down or indifferent. Thursday I'll be back at The Littlehouse with my NeedleCrafts group. Friday's plans are somewhat weather-dependent.

Back on January 22, a big rock slide closed our direct route into Yosemite Valley. A lot of photos were published on Facebook and elsewhere, and it looked like we were in for a lengthy closure. Then to everyone's surprise, reopening occurred on January 28, albeit with temporary repairs.


It's time to pay the piper. We're in for a six-week closure, starting next Wednesday (this is a corrected date). That takes it until early April, subject to happy weather or delays. Our little town relies on the tourist industry and this is not a good thing to have happen, but the intention is to have it completed when the tourist season picks up for the season. There are longer ways in, all around Robinhood's barn. Does anybody know that expression? It's been with me my whole life, from the Canadian side of the family. I get puzzled looks when I use it, and I must admit, it doesn't make much sense if you stop to think about it.

So Friday, Sister-in-Law and I plan to drive over the repair zone and into the Valley, kind of a last shot for the next six weeks. We're hoping for good weather -- it's much more scenic when it is. We have a Sisters-in-Law trip scheduled for early April when we'll stay there for a few days. We'll be hoping we won't have to go all around Robinhood's barn to get there.