Did you care who won the Super Bowl?


Sister, Brother-in-Law and I went to our country club's bar for a Super Bowl Party, mainly to support our local business in a quiet time of year. It was fun, especially given it was a good game: close score but not so low as to lack action and be boring.

Fan loyalties seemed quite fluid. One guy applauded loudly and frequently for the Giants. Otherwise, loyalties shifted according to points people had in some sort of pool. I had left my house with Don't Know or None of the Above as my choice.

On the negative side of the outing, we could see the game and the commercials but not hear a word from either. Not that there was any lack of volume.


I was a big football fan when I was a kid, cheering the Los Angeles Rams with Papa. I went away to college in the mid-west and was located twixt and tween the Cincinnati Reds and Cleveland Browns, too busy with school and then babies even to develop a team loyalty while I lived there. 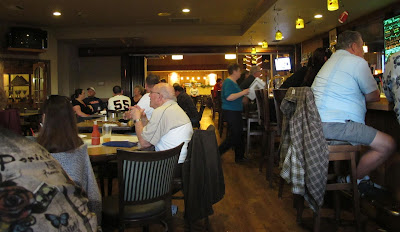 We moved to San Diego a few years after college, and since the Chargers were AFL and the Rams were NFL, could root for both. Then all that merger stuff happened and my loyalty gradually, somewhat reluctantly, shifted to the Chargers in an SD-LA face off.

Fast forward... we retired to Northern California, um, 23 years ago. My husband wasn't much of a football fan, but I didn't give it all the way up. My "local" team of choice became the San Francisco 49ers. I don't follow avidly, but I root for them and watch on TV when it's convenient. There was absolutely no question of backing the Raiders up here, because that Charger loyalty remained and remains. In addition, the Rams abandoned LA, as did any residual loyalty I had for them.

So as we went into the party this afternoon, we decided that since the Giants had knocked our 49ers out of the Super Bowl, we'd root for the Patriots.


As it got to the point where a miracle would be required for the Patriots to win and we were about to become downcast, Sister turned to me and said something to the effect that it really didn't matter than much.


With no money in the game, lots of goodies to eat and drink (with me as designated driver), and that good game, all that remains is that I'd like catch some of those commercials with their dialogue.