Thursdays Out . . . Turkey Attack and Other Misc 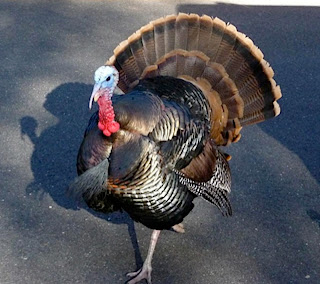 Lovely, isn't he? Brother-in-Law took Turkey's picture this morning before I arrived to pick up Sister for NeedleCrafts. I saw him standing in the street as I drove up, although not all fluffed out like this. Turkeys in the neighborhood have a bad reputation. I would have loved to pull in Sister's driveway and throw the door open for her to hop in, but there was a lot of parking and other confusion in the driveway and in the street and there was an arrival pending of a truck with insulation. (I knew. I'd come up behind the truck, blocked by our security gate. I was pretty certain he was heading for Sister's, so clicked him through. I'd arrived before him at the house because I came by a shortcut.)

So I pulled into the driveway across the street and started to walk over in search of Sister. Turkey had other ideas. Turkey's beak was about chin level (mine) when he stood up to me. I raised my hands and waved them, to appear larger, like they tell you to do when confronting a mountain lion. Turkey advanced on me and my arms-raised position only made me feel more vulnerable in the boob and face area. I backed across the street. Slowly, quickly, whatever I did, Turkey didn't back off or lose interest at all. The contractor and the carpenter and Brother-in-Law took up arms -- er, belts and sticks -- to do something. Running off or retreating wasn't in Turkey's game plan, but enough of a diversion was created that Sister and I ran for the car and jumped in before he reached us again.

I tried backing the car up slowly toward him, as he'd finally come back after us, but he didn't really budge from behind me; my back-up alarm increased from beeping to shrieking. Brother-in-Law was brandishing a long stick back there and as soon as I'd backed out far enough to crink the wheel, we made a break for it. We didn't look back. I hope no men were harmed by Turkey. I didn't see him when I took Sister home this afternoon. 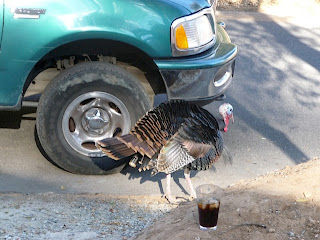 We had a record crowd at NeedleCrafts today, 14. The room was packed. I'd been contemplating advertising, but we're getting new people through word-of-mouth. More than usual stayed for lunch and worked into the afternoon. Our row of card tables was so long I couldn't see all the projects going on and, since I was appliquéing again, rather than mail sorting, I was engrossed in my own project. Most of them were knitting, except Sister, who was preparing photos taken of Nephew's wedding in October to work on in a scrapbooking camp she'll be attending. (Or maybe that's a quilt camp she'll be scrapbooking at.) A great deal of excitement was generated when Rose whipped out these knitting needles in an array of sizes. They have small tips (I think wood), are permanently mounted on their cables, and . . . they do have pretty little designs on them. As a non-knitter I don't understand the significance of all this, but the ladies were passing the catalog around, deciding whether to treat themselves to a little post-Christmas gift. 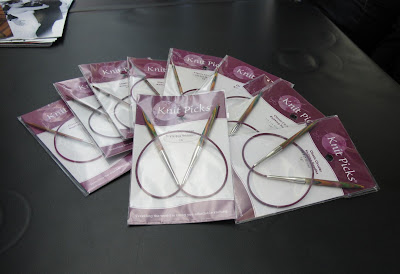 I'll skip a picture of my project work this week. It doesn't look much different from last week. I did download this picture taken New Year's Eve of some Christmas lights in Sister's neighborhood . . . very low key but so beautiful in the gathering darkness. I didn't think I'd captured more than red and green blobs, but click it to enlarge and see the hint of detail in those colored balls. 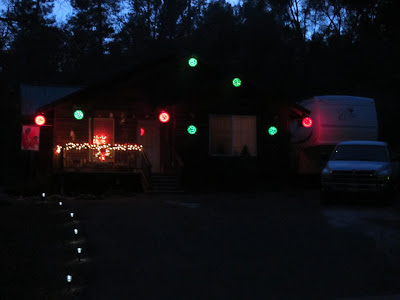 Last night I decided to watch a French movie I'd seen on an overseas flight a few years ago when it was a big hit in France, Bienvenue chez les Ch'tis, or Welcome to the Sticks. Those airline movies are never quite coherent, since I hadn't caught it from the beginning the first time and saw other bits and pieces in subsequent showings, all out of order. It's a comedy, rather slap-sticky, but good for lots of laughs. It wasn't available in the format compatible with American DVDs for quite awhile and then I still hadn't watched it. Last night was the night.

A funny regional accent and alleged backwardness of the northern people is the basis of the humor, so, in order to practice my French, I played it in French, with English subtitles so I could follow the rapid dialogue and translate the funny regional accent. An additional bonus that resulted from the delay in viewing was that Sister and I visited the city in the south of France just this last summer where part of the action takes place, with our own funny stories to go with it, so I enjoyed the revisit.

As subtitles flashed past, Jean-Luc parked himself thusly, and didn't care to leave:


The only television that has ever interested him is meerkats, which he stands up with paw to paw. Little tease.