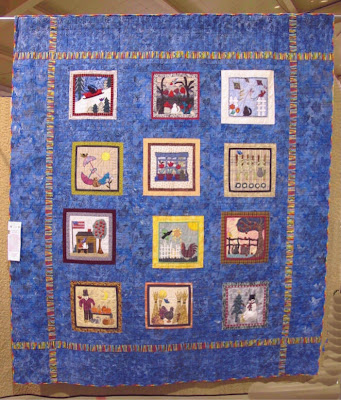 When I first started this blog, I didn't have anything to put in the right-hand sidebar except for "About Me" and my photo, followed by white space. Other bloggers with some time in front of the screen had accumulated various "things" to post. Blogger envy set in. I'd recently completed a Calendar Quilt, with a block representing each month, so decided to present the Block of the Month in the sidebar. Here's the whole quilt, named Friendly Foes, based on a wall-hanging that grew to enormous proportions (king-sized plus). Each block has a cat and a bird, "friendly foes."


Twelve blocks, twelve months of blog. Finished. But I like the idea of having something changeable in place of Block of the Month, so I've hit upon the idea of posting a photo taken in the current month, although not necessarily this year. I skimmed through January photos taken since I had a digital camera, collecting candidates for the sidebar.

By far the most fertile ground for January photos was 2008, when Sister-in-Law and I took a winter trip to Paris with Jeanne, the leader of the quilters' tours I go on, and a friend of hers. Not all the photo choices show off well in the slightly-over-thumbnail size the sidebar gadgets accept, and they don't all look as well cropped to square. I've tried here. I probably should have shown the originals here. But . . .

Here are the alternatives to the one I selected.