The kitty-sitter, who visited with and fed my cats and medicated Chloe twice a day while we all went to Ben's house for Christmas, needs to get a check. From me. She didn't say so, but I was reminded by the fact that the end of the month is here, so I was in bill-paying mode. I ran the check to the post office so she'll get it before the long weekend. I have my rounds at the post office: Sister and Brother-in-Law's box, the computer club's box, and my box, which also gets RV club mail. I told the kitties I'd be right back.

There was an obvious Christmas card in Sister's box, so I dropped in at their house just to leave it off, making my way through a variety of family vehicles and construction trucks tending to the building of the Dream Garage. Sister's friend Laura had arrived for the weekend. We'll all be spending New Year's Eve at Sister and BIL's house for a prime rib dinner. They invited me in for some Brie and baguette, and I chose a cup of tea to go with it. Then Sister asked me if I wanted to join them going out to dinner. Tonight.

Sister had proposed that earlier in the week, but I'd declined. Several minor excuses had come to mind, not the least of which is that I'm still filled up with the burrito from last Monday. I sure couldn't go out the way I was dressed: jeans, white sox with sandals, the third day on a warm turtleneck, no makeup. And I'd promised the kitties to be back soon. But I wavered. Laura's fun to visit with, I'd only planned creamed tuna on toast, if I even got around to that much cooking, and . . . well, I caved without much resistance. A quick change of plans, a quick change of clothes and a pat for the kitties, then back to give them a ride to The Grill. (My car was warmed up, no frost on the windows, and behind everyone else's vehicles.) 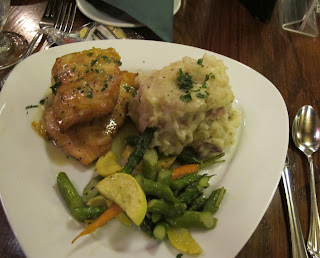 I choose the Small Plate pan-seared salmon, finished with a wasabi orange cream sauce. I almost always choose this because it's so good. I'm dubious that it was really the Small Plate version: I have enough left over for another meal.

I regret that I neglected to take a photo of the tiramisu that Sister and I split for dessert. Or BIL's mixed berry cobbler a la mode. I also missed the West Coast  Louie with fresh crab, bay shrimp and prawns, with avocado, egg, tomato, cucumber and traditional louie dressing, which Sister didn't get until we called attention to the fact that it hadn't been served with our hot dishes.


After the meal, I dropped them all back at their house and got home to my feuding kitties (the Chloe and Jean-Luc perpetual face-off).

Not what I'd planned, so I'll be working on bills in the morning and a book review blog. No moral to this story. No exciting conclusion. But a lovely dinner, enjoyed in a leisurely fashion. Although The Grill was crowded when we arrived, it appears that tables were for the evening, one seating. The "boys" are in bed in the kitten room now, and it's time for Chloe and me to head in for nighty-night. Maybe this is the calm I wrote about last night.