It rained in early October -- a real soaker -- then it cleared up for my nephew's outdoors wedding on October 8, followed by a beautiful month of mostly warm days and cool nights. But something's happening now. Rain was forecast in Sacramento and north for today, for our area south and east of it,  tomorrow.  The state road department announced it would close the two mountain passes just north of here at 2 p.m. this afternoon in anticipation of snow.

I think Sister, Sister-in-Law and I made our trek to Tioga Pass on Monday just in time. The National Park tries to keep the road open as late in the season as possible, so there are often repeated closings and openings. There were still snow patches left up there from earlier high country snowfall. I haven't heard any announcements about plans for Tioga Pass for this snowfall.

﻿﻿ ﻿﻿
We had 11 ladies again at NeedleCrafts this week. Paula found a solution for the over-expanded knit hat, now suitable for a little girl. 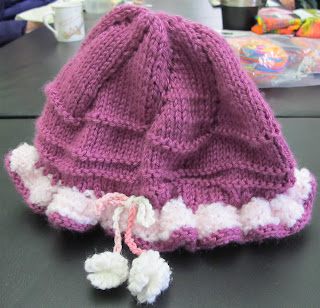 A baby hat with a knit decoration was passed around. Not positive who made it -- Judith, I think? Or perhaps Barbara? 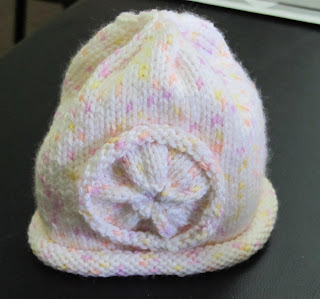 Mid morning, as we chatted and knitted, wind began to blow and pine needles rained down from the trees, to be kicked up into mounds at the center and edges of the roads by cars' tires. Driving home, I had the feeling it was the last chance to get pictures of fall colors. It's not a mass of color, like autumn in Vermont, just color spots here and there, against a background of evergreens -- live oak, pine, cedar. The other oak varieties either drop crackly brown leaves, or hang onto the dead ones until new ones push them off in the spring. My driveway crunches with acorns under foot. 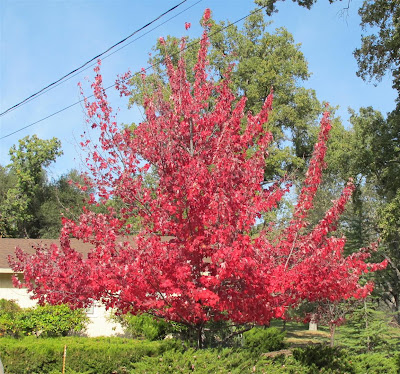 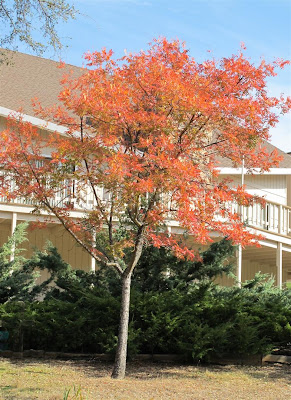 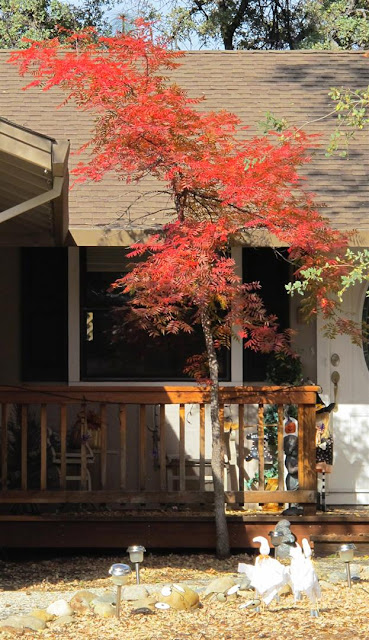 Tonight, they're reporting chains are required on I-80, the main highway across the Sierra, from San Francisco to Sacramento to Tahoe to Reno and on across the country.

I put flannel sheets on the bed last night. I'd forgotten all about them until Sister-in-Law mentioned them this last weekend. It took a chill off the bed.

As I put this blog to bed, I step out on the deck into cold rain, and the two feral kittens rush me. I get some twine to tie down the tarp over their food bowl and cat bed (not sure whether they've discovered that one yet), and put a little more food in their bowl.