First thing I do in the morning when I'm away from home is to look out the window to see how the world looks today, then I take its picture. This morning, Thursday, I looked out to see sun filtered through autumn leaves. With weather forecasts being iffy, will it be a white world Friday morning? Snow is traditional at quilt camp after all. Stay tuned. 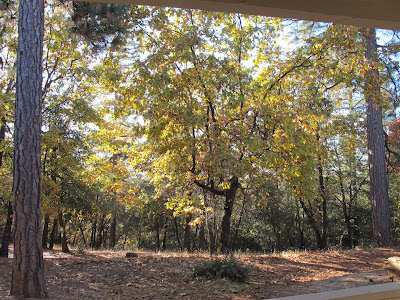 First thing that happened when I raced up to the sewing room a little before nine, unsure of what time breakfast would be served, Penny, a loyal reader and one of the Leopard Revival Ladies, came to reveal the first of today's leopard rollouts, her leopard manicure, to be shared with other loyal readers. 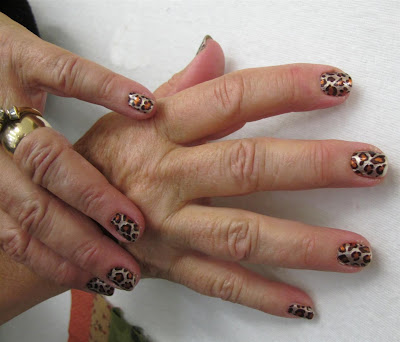 I also took a couple of pictures of her modeling a leopard bathrobe, which I promised not to publish if they weren't flattering. (If you're a woman or someone who knows a woman, you are aware of our shyness about being photographed in our bathrobes for everyone in the world to see.) This evening she withdrew all permission to publish the bathrobe photos, regardless. They're really quite cute in my opinion, but I made promises.

Barbara got all her blocks made and borders onto the quilt she was working on yesterday. Made of Australian fabrics, it's called "Aussie." I'm not sure how the photos are coming out here because my laptop screen is not rendering pictures in stunning color, but I'll tell you, this quilt is beautiful. The blocks appear to be floating, with their shadows beyond them. The whole piece itself forms a shadow, although this is not so clear with the sewing items in the way. 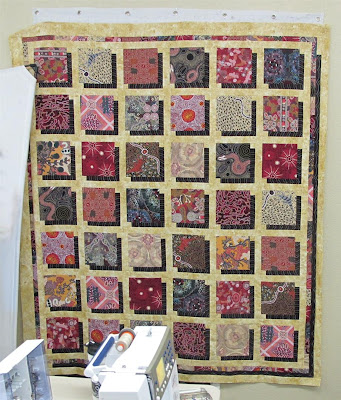 My day contained a couple of oddities, which consumed way too much time. First, not time-eater, was the tiny screw that appeared right in front of me on my worktable. Teeny tiny Phillips-head, silver in color. I had someone else look at the hinges in my glasses. Not missing. Looked at my cell phone, my PDA, my camera. Not theirs. So I taped it to a Post-It pad and put it in a zip bag.

The day went on with my mending some pants (surely I did something else I've forgotten about), and had my first fabulous massage, desperately needed because I'd really tweaked my back when I stumbled while packing the car on Tuesday evening. Oh, yes, I did sew something else which must be kept confidential, due to the gift nature of the project.  During that project, a thread got jammed in my sewing machine which  interfered with continued stitching.

It will come as no surprise to you that when I went to pick up the screw from the table beside me, it was nowhere to be seen. Screwed, royally.

It's a little spooky late at night and alone here, and there is still so much more to today's story, I'm afraid I'm going to have to give up and continue tomorrow. 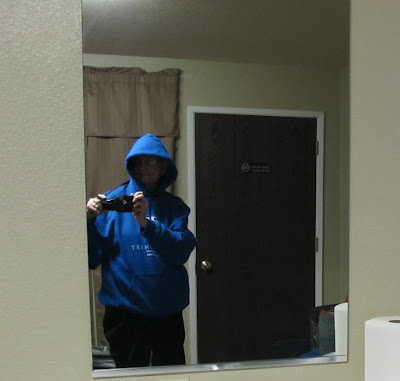