Screwed! (and not in the good way)

First, my wake up photo for today.  No sun filtering through the leaves. No snow. Not even rain. Just dull skies and a dripping sound. 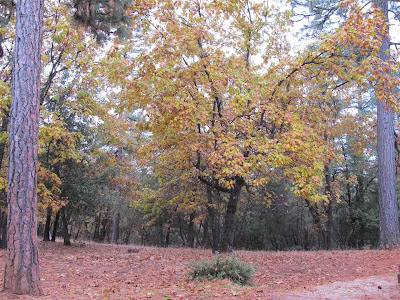 Getting up was hard to do. I had the all-over aches after having all the knots massaged out of me after tripping on Tuesday. Toxins, those things. It's apparently true.

I staggered out of the sewing room last night leaving you with the info that I had a screw loose -- no, lost -- out of my sewing machine. I titled this blog as I have because of all the witticisms made in the aftermath of my screw(ing) problem as my fellow campers left the room.

My work table is not a neat space. I'd been twisting the sewing machine around as I and others tried to peer inside the bobbin compartment, propping it on things. There was an array of sewing equipment -- scissors, spools of thread, the flashlight for going out in the dark later, stylus, Orajel, coffee mugs, power strip and a few cords, an ersatz scrap bag made from a taped up grocery bag. Just a few things to search through. But no screw. It could bounce a bit on the carpet if it had fallen off the table, but would roll in a circle, not roll away.

(I'll throw in some photos of other people's work, since I wasn't doing any, just to spice up this narrative.) 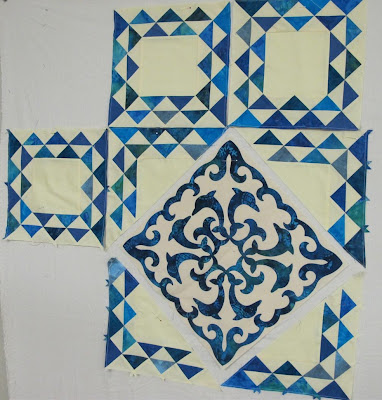 Under the work table is another array of related "stuff," lots of them open, which the screw could have fallen into. And, shudder, a floor furnace register within bouncing distance. Soon there were three or four of us plowing through bags and cases and crawling on the floor under the table. One of them pulled the grate out of the register and shined the flashlight down the whatchamacallit. We did not look under my cutting mat -- it's flat. No luck.

After at least a half hour of fruitless searching, maybe more, I thanked my helpers. A few more straggled by, offering helpful suggestions. Been there, done that, to all of them. I was assured that if the stuck thread, which was no longer visible, had somehow worked loose, and the machine would run, I could ignore the missing screw and get on with quilting. I'd begun to think that the gremlin that had dropped the tiny screw on my table earlier in the day was taking back payment in kind. 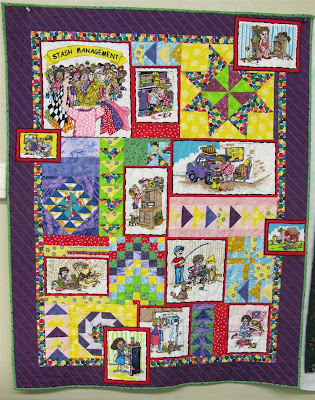 Be that as it may, can you really just ignore that this beautifully machined screw can have completely walked away?  Bone-in-teeth-of-bulldog, all that stuff, I couldn't really let it go. I would organize everything that had been ripped apart (thank you, no, I think I'd better put stuff back myself so I'll know for sure where it is), and in the course of that, search again. Empty out every bag completely and put the stuff back in. 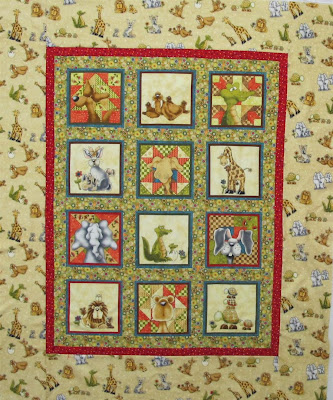 Narrow bag of written/writing materials. Bag with food-related items. Many large zip-lock bags of threads, inside a tote bag, inside a basket. Rolling back pack which holds the laptop and electronics cords and chargers (it had been unzipped and open). Walking stick and gloves, flat on the floor. Small rolling duffel for BIG electrical cords, spray cans of this and that, folding iron, plastic folders with a million miscellaneous sewing supplies. Paper bag with the quilt to be quilted (some more). A large rolling tote for sewing machine, into which I'd folded my down coat and scarf. My backpack-in-lieu of purse. 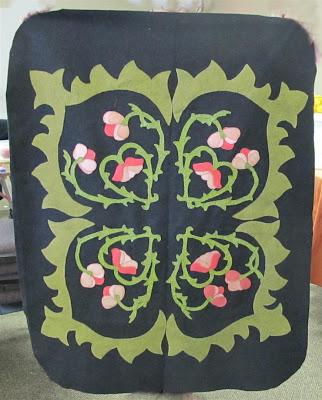 All of these had been inspected and upended by one or more of the searchers. In the approximate order above, I re-emptied, overturned and replaced all contents. The last thing left was the sewing machine bag. The down coat was out and had been shaken by several of us. The rolling bag had been upended. But I gave it one more chance and I even said aloud, "You're my last chance, so you'd better come up with it."

There's an attached pad that covers the sewing machine, cinched down by a Velcro strap inside. The black pad was folded in the black interior. I unfolded one layer of the pad, then tilted it up so I could see the bottom of the bag. It took a moment to focus on the tiny thing, but there it was! My last chance came through. I called across the room to Donna, "I found it in the last place I looked." We'd laughed at that truism earlier in the day. But sometimes the last place you look is the last place you can look.

It's a mystery how the little screw got down under the down coat, under the folds of the pad and remained there during all the shaking and inspecting.

Did the gremlin that took it return it, getting a good laugh at all the searching? 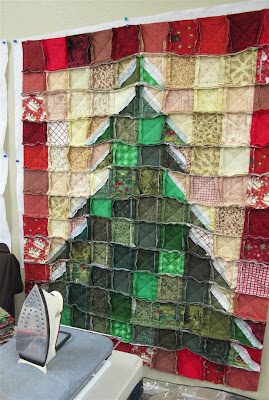 I screwed it back into the machine. I have yet to test whether the stuck thread has disappeared. 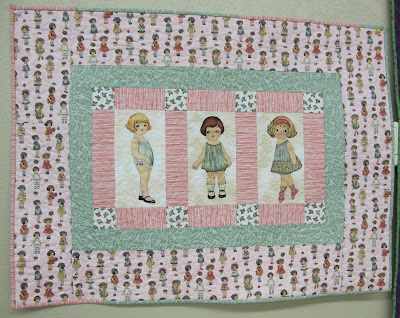 Now time to get at the quilting.