Here "it" comes, the week before Thanksgiving. In addition to Thanksgiving, "it" is the reason I'll never sign up for NaNoWriMo. NaNoWriMo -- I have to Google it every time -- stands for National Novel Writing Month, wherein writers of every stripe join together in a challenge to write a 50,000-word novel, full speed ahead, in the month of November. I heard of it for the first time in October and it sounds like fun. But not in November.

It is time for Fall Quilt Camp, one of two annual quilt camps put on by my quilt guild: Five days and four nights of quilting, meals served, the world's best masseuse on premises, trying to slip a little quilting in between her avid clients. First order of quilting business is to put a label on a wallhanging I worked on for parts of the last two quilt camps. I'll be donating it to Soroptimist for its fall fund-raiser auction. Another thing is to put some serious effort into finishing the machine quilting on an old project (or maybe two -- I won't know until I go to the shed).

﻿﻿
﻿﻿"The Shed" is the term that comes to me automatically when referring to the storage unit I rent to keep the overflow of ... everything ... in. I wonder sometimes where that inclination comes from. Maybe it's from the mists of time, like my Grandma always called the garage "the barn." No doubt her first car was sheltered in a real barn and the terminology stuck. On formal occasions, to people who might not understand, she'd refer to it as The Car Barn.

In addition to this fine occasion of quilt camp, there was an unfilled opening in a quilters' workshop next Monday, Bobbi Finley on "Making a Tile Quilt Block."  Appliqué. Hmmm. An appliqué quilt will give me a long-term project for Thursdays Out at NeedleCrafts. They'd have to stop making fun of my mail-opening and paper-sorting.

Whoa!  Interruption and a big fuss. Little Boots, the girl kitten, knocked at the door right behind me for some food. I hadn't seen her since last night, and her brother Stripes (or sister, as case may be) was here earlier. There's a screen door as well (which the little beggers climb up to catch my attention), that I take a bowl of food out through and shove way under the tarp-covered bench with a Pik-Stik. I did that, thinking kitty had gone after the food, came back into the house, herding Jean-Luc inside with the Pik-Stik, and closed the main door.

Followed by cat-shrieking and scratching and scrambling. She'd tried to follow me in the door and got caught between screen and door and was bouncing up and down between them like a prickly ball. I tried opening the door a crack to see whether I could push the screen open, but it had uncharacteristically latched and I couldn't reach past the flailing claws. I had to go out another door to open the screen from outside, and she ran away still shrieking. That feral instinct against confinement.

I would have thought I wouldn't see her for awhile, but she and Stripes are right back now, begging. Although she didn't get too close to the screen when I came in after delivering enough food for a second eater. 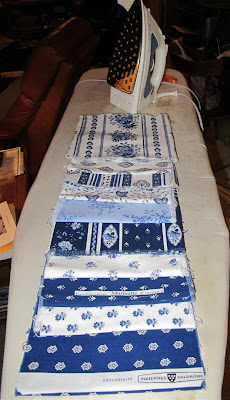 Back to Bobbi Finley's class. I went in search of fabric in the boxes in the house and found a collection of French blue and white fabrics I'd bought in Aix-in-Provence a few years ago. I'd intended to combine them with other French blue and whites and some yellow, for that Provençal vibe. I'd looked over the various designs in Bobbi's book and I think there are possibilities. When I make quilts, they're to use, which means they'll be washed, which means I always prewash fabrics since there's nothing more disappointing than having your blue and white and yellow quilt come out of the laundry green.

My best practice is to serge the raw edges of the fabric before washing it. I know my washing machine winds everything into knots, and I know that raw edges fray and unravel in that machine. But it's been awhile, and I guess I thought I'd give it another chance. Bad decision. What a tangled mass of thread and fabric strips! Worst ever. I don't know how many square inches of fabric were lost and tossed.

That wasn't the end of the problems. I got all the short pieces of blue and white fabric ironed and was almost done with ironing the one large piece when I notice the iron had sputtered out a rusty spot on the white fabric. (Certain cuss words which might offend delicate ears were emitted.) What counteracts rust? Lemon juice? Or is that tea-stained cups that lemon juice fixes?  Lime-A-Way? It mentions rust right on the front of the bottle. Then I found another spot. Two squirts of Lime-A-Way. And then a bunch more.

It wasn't until several spots were soaking in Lime-A-Way that I finally found the extremely fine-print English instructions that warn about wearing gloves and goggles to open the bottle, first very gingerly with a pointed object. I'm not to spill it on my skin or clothing. Oh oh. Am I feeling hot spots on my hands? Is my fabric going to have a hole, or holes, in it? 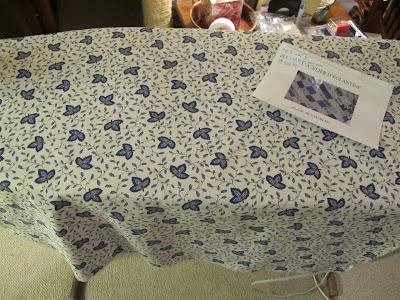 As I've been writing, I've been rewashing and redrying the big piece, and have just reironed. I don't see any rust spots. Whether I've managed to weaken the fabric I suppose only time will tell.

What, you may ask? You risked more sputters and spots?

I've had my beloved Rowenta iron for many many years. This is an expensive model, not one of the price-friendly models that have come along after it. But I'd heard people speak of failures. Still many years ago, there was such a fabulous sale on one of the heavy Rowentas that I couldn't resist, and laid it in as a backup to the eventual and inevitable failure.

The new Rowenta was not out there, no matter how many things I looked behind. If I'd moved it, it went contrary to the plan to put hard things out. Surely no one had snuck into the garage and stolen the Rowenta. Basically the only thing that has disappeared from the garage is dry catfood, by virtue of marauding dogs and raccoons.

I eventually found it in the back of the cupboard that my old Rowenta is stored in. Phew!

I'll look for yellow fabrics in the shed. At least the shed is organized. But I have a bunch of other things to do, apart from the workshop, before I leave for camp: a play, Soroptimist luncheon meeting, and a computer users group meeting.

The cats sense I'm leaving and don't like it. Would you say Chloe is hovering? 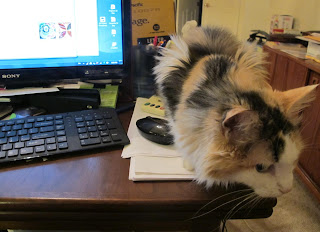 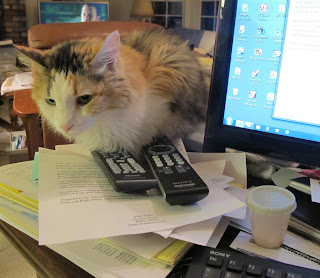 Packing is more complex than for normal travel, since we need to bring towels, bedding, and snow clothes, not to mention s-loads of equipment.

See you soon. If they still have wifi , I'll try to post while I'm there.