I found this in my notebook, a blog before I even started blogging. I wrote it a year ago today.

Eeeaiy . . . I flipped on the bathroom light and a pale spider began to race towards me across the pale carpet. Thick-soled shoes on, so uncharacteristically I stomped, then scrubbed my foot around on the carpet, hoping to obliterate any evidence of the trespass. But can it have hidden in the deep tread of my shoe? JR from the pest control company had sprayed outside today. Sorry, spider. Wrong place, wrong time.

JR had also put mouse traps in the basement. I'm to call him to come remove successful catches. Or get him a basement key so he can check periodically. Not sure about that. Not sure I want anyone but my coterie of cat sitters and house cleaners and relatives having access at will to the locked portions of my property.

This mini-trauma (the spider) certainly detoured my intent to wax rhapsodic about the beauty of my trip to Sonora today. It was Sister-in-Law who told me on the phone about the big beautiful clouds. I'd only glanced outside enough to see there was sufficient sunshine to cast shadows. Yes, indeedy, big puffer billies.

As I was getting ready to leave mid afternoon, JR arrived and I opened up garages and basements for his access and commented that over Sonora way, or, more accurately, over toward the Tuolumne River Canyon, the clouds roiled black and stormy.

Then I headed out. My letter in French -- the one that may drive a stake in American-French relations by its massacre of the language (much of it computer-generated off my slangy English) -- only cost 98¢ to mail to France.

Okay, let's shortcut the wax. Winding down towards Priest Station, a clarity I'd never before seen of the Valley -- and an enormous shiny reflection off a body of water. Too far out to be Don Pedro. What the hell?! I harkened back to the solid bodies of water that evaporated from view on the drive to San Felipe. I had never seen so far from Priest Station.

The shadow and light along Hwy 120, the slanted light of the sun reflecting off the white rectangular sides of the houseboats lined up in a column on Moccasin Creek.

Reflecting off multi-shades of red-cloaked trees, defining the needles on the pines, and overhead, the blue of the sky, deepening the steel-blue water of Don Pedro.

Fields of grass, dried now in what Mom always called Palomino Hills, so much more beautiful than "dead." After 20 years of telling myself that I must stop one day to take pictures of the rock crops. Today, I was ready to do it.

Either the angle of light and shadow was wrong or the jagged brown of the rocks didn't contrast enough with the grasses, but today wasn't the day.

But it was a day for pink skies in the east over Sonora at sunset, red trees, green traffic lights, and a chill bite of winter in the air. 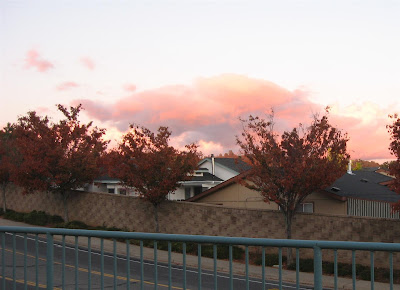 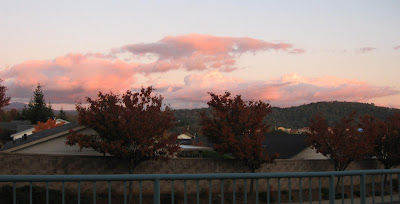 In the year passed, no mice have been trapped.