Thursdays Out is feeling neglected. Not that Thursdays have been unbusy. In fact, some weeks are so busy that Thursday merely merges into the steady stream of days. We are growing quite a group at NeedleCrafts. It's nice after years of three or four of us that the group has become self-sustaining. The absence of one person is no longer cause for cancellation. Two weeks ago several people said they wouldn't be there the following week, then 10 of us showed up, tying the previous max. This week we had 11 before the day was over. 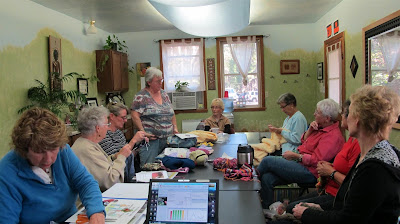 You see knitters, crocheters, a scrapbooker, a photographer putting together greeting cards, my computer doing security updates as I contemplate blogging amongst all the conversation. I've shown some of their creations on earlier Thursdays' Out. Here are some new little baby hats, waiting for the arrival of new grandbabies (or possibly great-grandbabies for some of us). 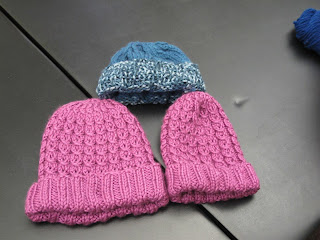 The next hat takes some explanation. Paula was trying to knit a toasty hat for herself (I think) and got to the point where stitches stopped being added for each row around, in order to make it snug around the head. (Or so I am told. Nothing I've ever tried to knit has behaved in the expected fashion.) Yet, while Paula stopped increasing, the hat continued to flare, ending up a little more like a doily than a hat. (The white part is supposed to be a ruffle, but not that other color.) You can see the outcome. 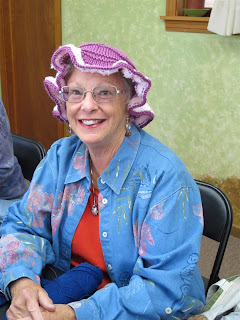 She's returned with it on Thursdays for several weeks now as we all get a laugh and make suggestions for remedying the problem. I'll take your suggestions to her if you have any. I'll do an updated photo if any of those work.

Paula had more success with this cute little baby jacket. 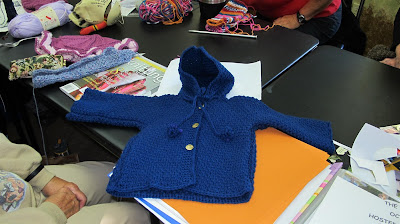 Sister is in town here at their Mountain House now. She's the scrapbooker in the photo, putting together a scrapbook of Nephew's wedding. After NeedleCrafts, we gassed up the car for our trip to Yosemite on Sunday. She, Sister-in-Law and I will be spending three days there. Sunny weather is forecast most of the time, with chilly overnights. We should be blogging some good pictures. Brother-in-Law will get to entertain two households-worth of cats.

I checked out the garage construction site when dropping Sister off. I was disappointed to learn that the garage door will not be as big as the fire house's door. A temporary support has been put up through the center of the lower garage to support installation of the trusses, which were scheduled for delivery Friday. 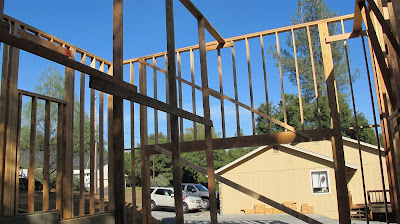 The installation of stairs from lower garage to upper garage was underway. 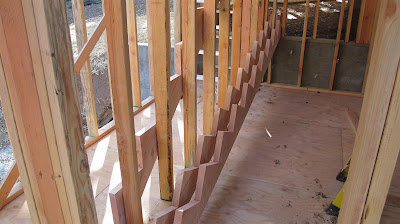 Maybe they'll have the roof on by the time we get back from Yosemite.