"If you put things where they belong when you're done with them, they won't get lost."

Yeah. I can agree with that. But my car key belongs in my pocket. It's a single key, the kind with the remote door controls in it. The service manager at the car dealer told me that it isn't a good thing to have a key chain with half a dozen keys dangling from the ignition. So my single key goes in my pocket, then into a basket on the kitchen counter or tray on my vanity when I go to bed.

The other day I put on a pair of "pedal pushers" (what do we call them now?) with no pockets. I complained at the time of purchase at the lack of pockets on those and a couple of other pants I was buying, but she-who-shall-remain-nameless said,  "But they look so cute on you, Lee."  "My keys and my Kleenex???"  She-who-doesn't-even-own-Kleenex, "You can put them somewhere else."

During a meeting that evening I stuffed the key in the water-bottle pocket in my purse, along with the water bottle. When I got home after the meeting, I had a bag sloppily stuffed with laptop and cords, the purse, and a handful of junk mail to carry in. The key had to have been in one of my three hands, and I thought I threw it into the basket on the kitchen counter when I walked in.

Wasn't there when I needed to leave the next morning to take Chloe to the vet, nor in the purse or the vanity tray or next to my computer keyboard or on my bedside table. As a temporary measure, I fished out the key chain with the half dozen keys to use for the day.

But last evening I went into full search mode. I reviewed all the spots in the house, then went out to the car to search all around the seats. I have a bad habit of putting the key down beside me on the seat  while listening to the final word on a news story on the radio, then getting out without it. (Struggling ever to remember the door code to get back in when I do that.) I resorted to flashlight to look under seats, inspect the narrow spaces between console and seats, peer into the darkness between console and dash where the odd CD resides. Something was there in a plastic bag. I pulled it out to look under. The baggy contains a center punch, the old-fashioned tool carried to bust out auto windows in case of accident.

In the same baggy, it's the long-missing, thought gone-forever, Soroptimist name plate and membership pin & ribbon. I don't know whether I wore them for the Soroptimist meeting on the day I fell on my face. I do know they were missing from my notebook, where I very carefully put them inside a sheet protector, usually within a plastic bag with that layer of plastic between the full-muscle magnets and the backings, at the next meeting. I hypothesized they had somehow been rocketed out of my Soroptimist notebook when it flew away in the fall. The disarray in my notebook at that next meeting when I first opened it again gave credence to that theory.

On the other hand, if they had landed on a downtown sidewalk, in this small town they would have made their way back to me. I'm left thinking that at some point after the fall when my sister was driving my car and my notebook was out of reach, I happened on the bag with the center punch and stashed them there.  I don't think my memory was fully operational right after I fell.

As I carried my precious found items into the house, I spotted, at the far end of the kitchen counter as far as could be from the normal key repository, my car key, partially obscured under the lip of a brass egg poacher.

This may be important to me, but in the grand scale of things, these are trivial. I've been listening to news of the searches for Baby Lisa in Kansas City. They mention bringing in ever more professional searchers and making more intensive searches. We all pray it ends well, but things do not look good at this point. Ironic that last night's Law & Order:SVU was about the search for a lost baby. Ultimately, it was determined that the baby in question had died of SIDS, which the parents had handled very poorly. One of my best friends in junior high school had two babies (later on) who died of SIDS, before SIDS was known about, and they fell under suspicion and the suspicions were aired in the newspapers. Although I'd lost touch with her after we left junior high, I did not believe anything bad about her. I don't know how it came out.

I also recollected a search I participated in, many years ago, a bona fide search for a missing child. I was a reserve deputy sheriff, with an asterisk, meaning I was only sworn in to serve as an assistant advisor to a Law Enforcement Explorer Post in the Sheriff's Department. A seven year old girl went missing, presumed kidnapped. On about the third day-missing, searchers were called out which included our Explorer Post. As a slightly compulsive calendar-saver, I can tell you that it was August 11, 1975, a Monday.

We assembled in the countryside: grasslands, brush, trees, bluffs, dry stream beds. Not smooth, in other words. We were to do a grid search, walking in parallel straight lines, not far apart. We understood we were looking for a possible body, but were to keep our eyes out for any possible clues. The kids and I lined up, as did all the other units on hand, and we started to walk our straight line.

I don't know about those athletic kids, but I did things I didn't think possible for me to do to maintain my course. Scared of heights, I went straight over rocky dry river banks, scrambled up the other side, through woods and poison oak, through tangled vines with sticky cobwebs and big spiders (normally, prompting a flight response in me) and other weird critters, through mud and over rocks. On we pressed, for several hours. It was good news, in its way, that we found nothing. We searched for just that day. But as days-missing passed, hope for a good outcome dimmed.

Then sometime on Thursday, I got the word, maybe on the car radio, I'm not sure. I know I burst into tears.

I've found an article online in an old paper that describes the outcome: 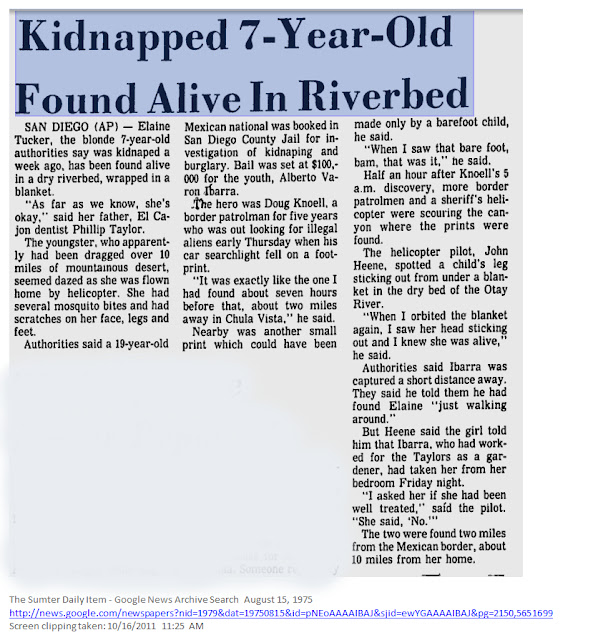 I weep tears of joy as often as from sadness. And then there was jubilation.  These are searches of consequence.