*﻿
﻿ When I first read the official call to the fall meeting of the district my Soroptimist group is in, I thought it would be fun to go. I've never attended a Soroptimist activity other than local ones and this one specifically invited all members. When I look back on my own life experiences, I've attended no end of conferences and conventions, so it must be something I like to do. However, since it was to be held two weeks after the big wedding weekend, I wasn't at all sure I'd want to get up before the sun on another Saturday so soon again.

Then at our Soroptimist meeting on Tuesday, two of our planned participants had to cancel and there were vacancies. I pondered. Did I want to give up two hours of sleep on Saturday? ..Or not?

I decided to go for it.

To minimize my morning wake-up shock, I showered the night before (wet head in bed = Kewpie doll hairdo), laid out my clothes and shoes, had my purse items in my backpack along with notebook and camera, and set my cell phone alarm. Naturally, my car key went missing as I was about to leave, but I moved to the Plan B keys (key chain with a hunk of keys) immediately, and was on time to catch a ride with Cindi to the city that's about an hour away.

On this rare occasion that I was sitting in the front seat not driving, I finally got this picture I've wanted for years. All those many years I'd driven my folks back and forth on this highway, my Mom had always piped up with "There's Egypt" when we'd see these triangular hills, particularly in the season when they are golden. "They look like pyramids," she'd say. Can it be that the tips of the pyramids have softened in the twenty-something years I've been making this drive?

﻿ ﻿ ﻿﻿
We arrived à l'heure, one of the 11 clubs in the district attending the meeting in a very nice senior center. First continental breakfast, then down to business. 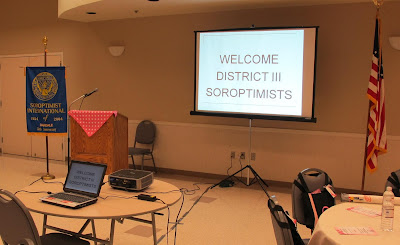 I'll spare you the business part of the meeting (which was most of it) but bring you a bit of frivolity for a good cause: a Mardi Bra Contest, wherein bras were to be decorated with an original design, to be subsequently donated to the Susan G. Komen 3 Day Walk volunteers to use or other fundraising events for Breast Cancer. I think there were about 13 entries (or maybe 17) but I'll bring you just a few that tickled me.

First, of course, is the one submitted from our club. Ours is the one on the left; I would have cropped the pic to show just it, except that the bra beside it is pretty cute too. 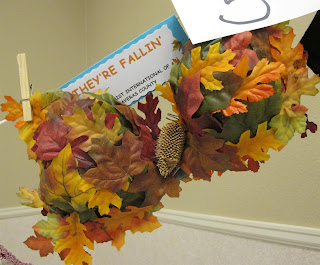 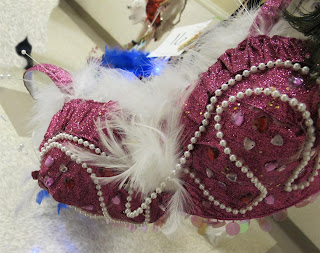 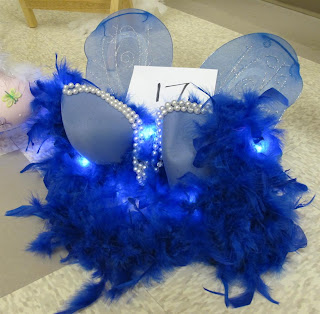 
I bought a cuddly sweatshirt with the Soroptimist logo on it from one of the clubs selling them there, and by the time we left, my simple backpack had devolved into an armload of individual items. Zip zip back up the hill and Cindi dropped me off at my car before taking Bonnie to her house. I had a little trouble locating my Plan B keys. They clearly weren't in my pocket -- turned out to be buried in the backpack. But what's this in the pocket? The key I couldn't find in the morning. I have no recollection of putting it there, so unless it levitated ... . Well, I just won't gripe when the gremlins of lost items bring them back.

But it's tit for tat and, later, when I go to get my camera out of the backpack to transfer the photos to the computer, it's missing. I left it on the floor of Cindi's car. So on this additional trip out, I stopped by to see how Sister and Brother-in-Law's garage has progressed since my last visit.

Wow! Way back when this was in the dream stage, BIL had been sizing up the doors of the fire station and commented that they were about right. Here it is. I believe the beam on the floor will be going up top, but I think this is as big as a fire station door. 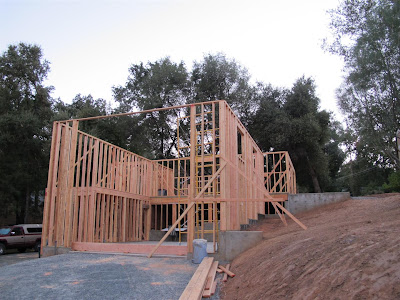 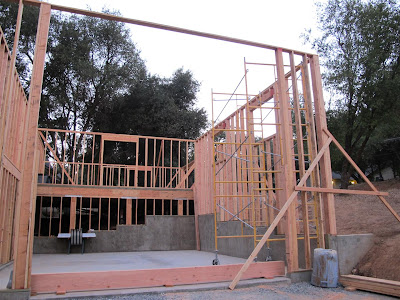 And that was my Saturday.