*
﻿ ﻿
﻿
﻿A clear day from the start, last May 16, with breakfast at the hotel in Saint Jean de Luz. Jeanne Mill's quilters tour group was heading for a train ride. I had more than the usual travel butterflies in my belly about this one, weighing whether to bail.

﻿﻿Here was my worry. Jeanne had asked what I thought of some of the proposed activities for the trip. One was a ride on le Petit Train de la Rhune, a cogwheel train up to the top of the first summit in the Pyrenean range. It straddles the border of France and Spain, with views of seven Basque provinces.

Sounds fabulous, I told her. And I meant it. But it was also accompanied by this photo of the train, to all appearances chugging (well, I guess cogwheels don't chug) along the edge of a precipice, on its way UP THERE. I had visions of crossings on trestles thousands of feet above the canyon below. I'm not at all keen on heights. I could see myself lying face-down, flat on the floor of the train, hiding my eyes. Would it be worth it? 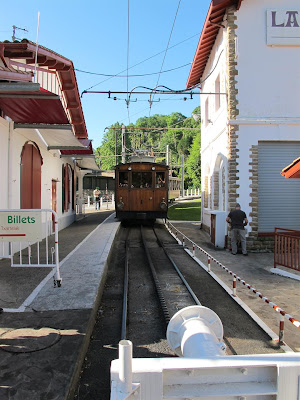 When push came to shove, I held my breath and piled into the train with the rest of the group. But I didn't sit next to the open window. Iban, our Basque guide, was very solicitous of guarding me from my fears. 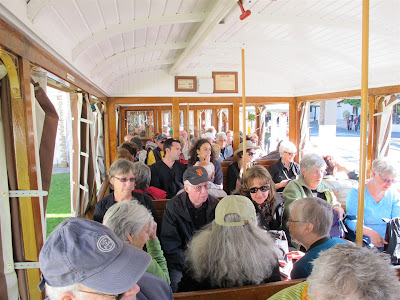 Rising to 905 meters (2969 feet), La Rhune hosts many varieties of plants and animals and a lot of historical events. A historical timeline lists items such as Empress Eugénie de Montijo's climb to the summit in 1859, which is commemorated by a granite obelisk; the conception of the idea of a railway in 1908; operation of the first section commenced on 25 April 1924, with the line to the summit opening on 30 June of the same year. I'm not much of a history buff, so gave the timeline only a glimpse at first, but found a variety of fascinating tidbits included. Check it out here. 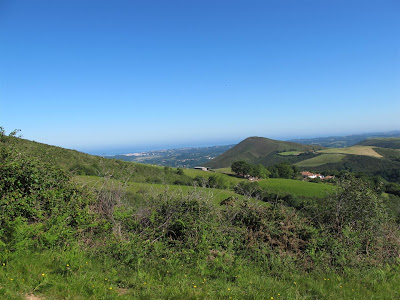 There are wild ponies on the mountain called "pottocks." (Honest, that's what it says.) 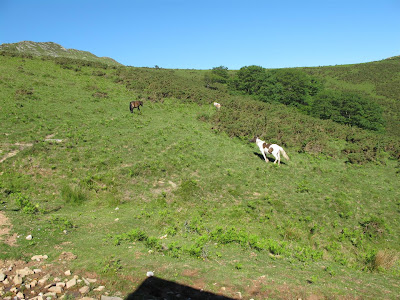 You may not believe this either, but part of that tiny speck that looks like a tongue sticking out below the "nose" on the bluff is some kind of mountain goat. I'll show it to you a couple of shots down. You may also be able to make it out if you double click the photo. 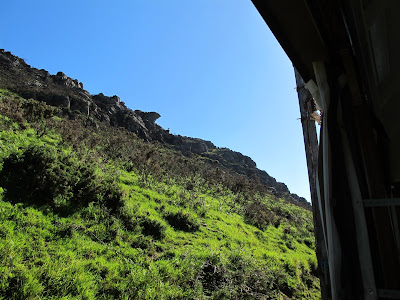 But right now, we passed the downward bound train. That means we're at the halfway point going up the mountain. 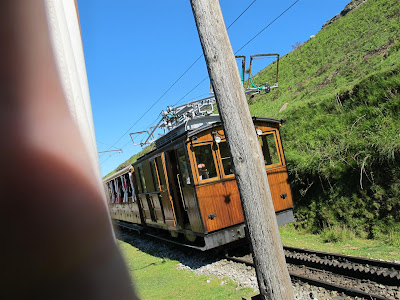 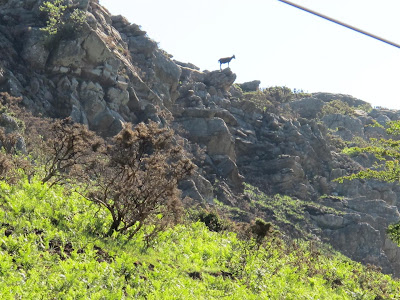 These flowers are probably foxglove, as nearly as I can tell from the flower pictures on the website. There are sheep in the shadows behind them. 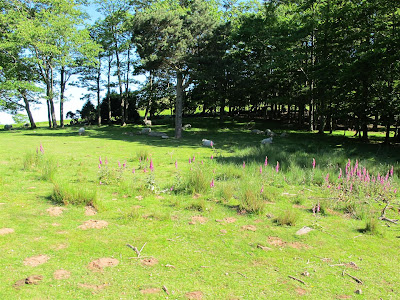 These are sheep. Sheep ranchers summer their sheep on the mountain. It's either free or cheap grazing, can't recall exactly. Each owner has a color of the season which is splashed on the back of the sheep, to identify whose is whose. (I'll accept grammar corrections on that one!) 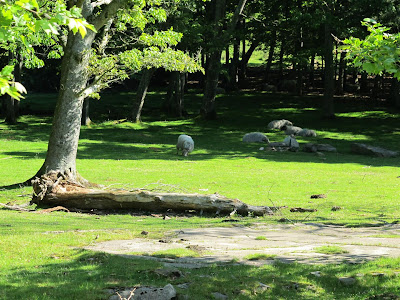 I believe some of those rocks out there are sheep. 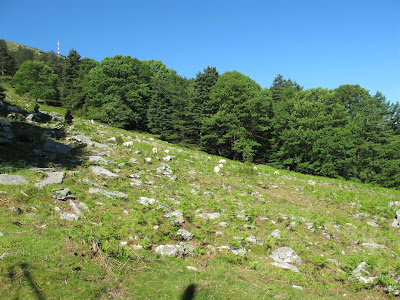 The mountain is crisscrossed with hiking trails. While the train ride up takes 35 minutes, walking down takes 2 to 2½ hours. Other hikers take longer routes around the mountain, and I believe it was Iban, our guide, who told me he brings his children camping there. That is Saint Jean de Luz out along the coast. 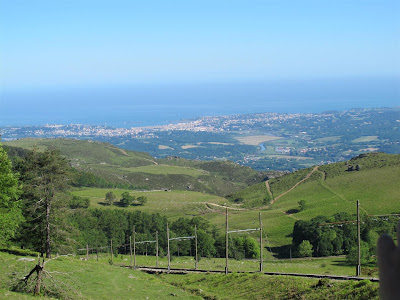 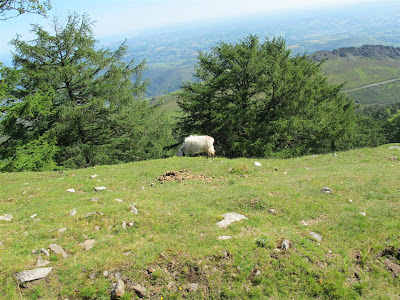 Iban at the summit, pointing out all that we can see from up here. Despite the bright sun, a cold wind whips us. 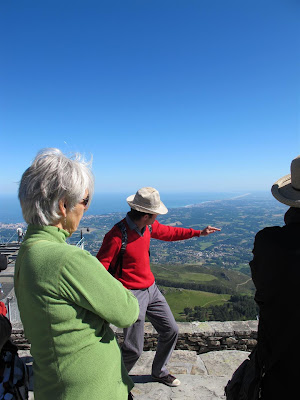 There are competing businesses up here, one trimmed in red, the other in green. People have their favorites, but I didn't go into either. There were too many stairs without railings for me to be comfortable going up and down. I'd already had one stair-related fall on this tour and didn't want to press my luck. 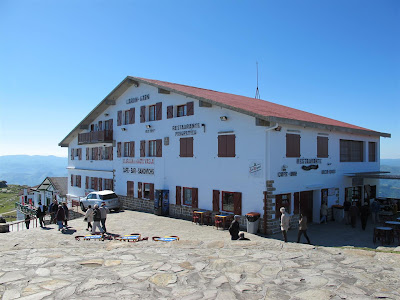 My chance to pat a pottock . . . people had been approaching boldly, but this pony snapped at the guy before me so my touch is tentative. See my jacket billowing in the wind. 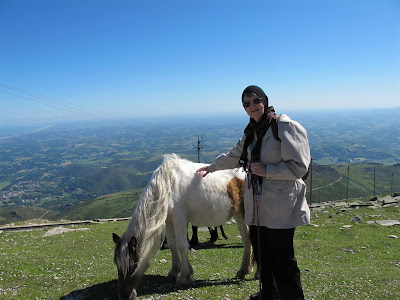 As the high point in the region, various communications facilities are located at the top. 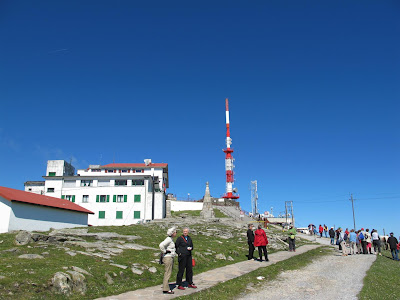 Roughly translated, Souvenir of the Ascent of Her Majesty The Empress Eugénie, is carved into the granite. 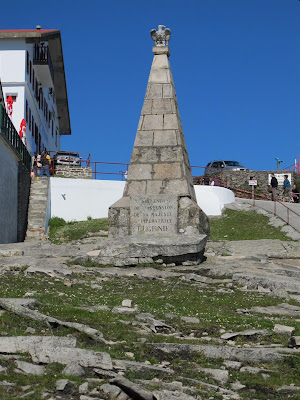 We head down, in the train. You can find an interactive map of the train's route and the hiking path here, along with additional pictures. 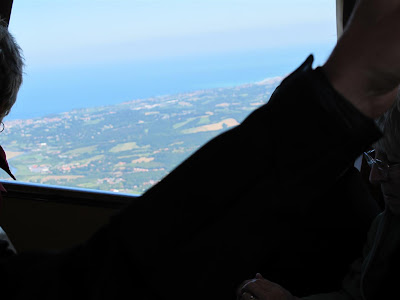 I'm facing frontwards going down, faced backwards going up (both of which are downhill views). 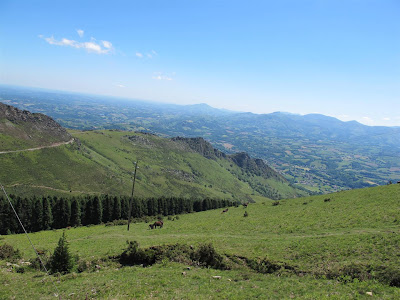 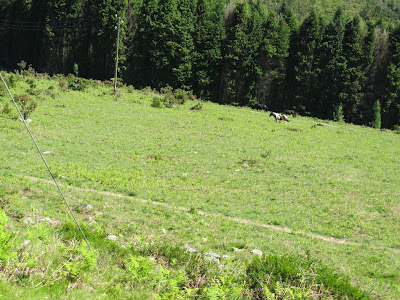 ﻿I dunno. They could be cattle. I can't even get a clear view in the uncompressed photo. 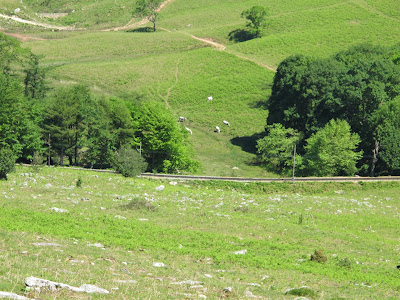 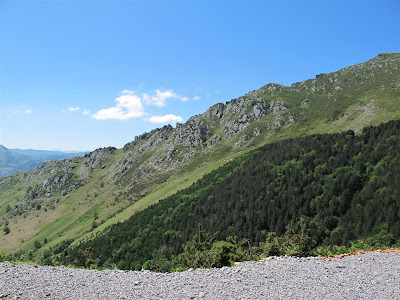 After we return to the station at the Col de Saint Ignace, we all make beelines to the bathrooms, then take the bus to Sare, "one of the most beautiful villages in France," where we have a Basque lunch at Lastiry. The train trip was fantastic and didn't scare the wits out of me at all. No trestles, and the precipices were bearable.  I'll blog on the rest of our day in Basque country in a later post. 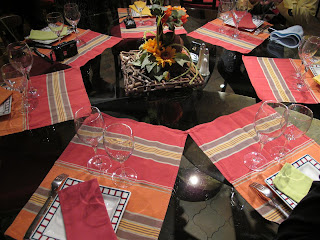