Thursdays Out . . . Playing Catch Up


>> The need for speed >>  I'm back in business on the Internet after spending a week of watching every little KB downloaded, in order to avoid running over my metered quota. The coup de grâce was when a 1776MB GPS download failed halfway through, after 3½ hours. The download must be repeated and the nearly 1GB lost still counted against my 5GB monthly quota.

My car is paid off, as of yesterday, so I splurged and bumped my monthly Internet quota by five times and doubled its speed. If I get jammed up with this now . . . well ~

Fingers crossed, Chloe is on the mend.  Chloe spent a week in the hospital, and bit me mid-purr the day I brought her home, causing a mini-meltdown (in me), contemplating how I was going to give her pills twice a day for life. Both of our stress levels have since receded, and we may have a much perkier kitty now.

The Greeter Kitty at the hospital had an interesting tail-cut. 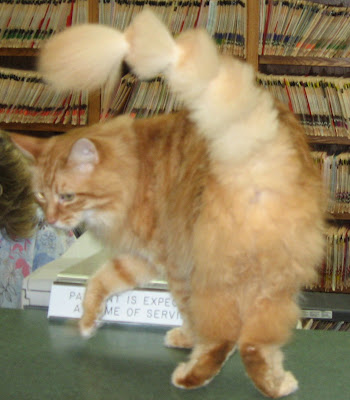 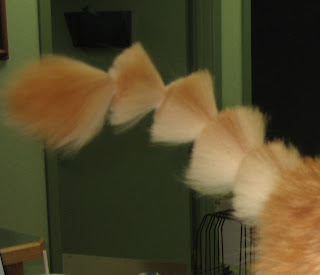 Camera repair  My good camera (Canon G11) is now off at the camera hospital for an LCD replacement, as a result of its crashing just as hard as I did. My Canon SD 530 had seemed perfectly adequate before the G11 but now I'm noting some of its shortcomings as it fills in in the interim.

Little Mama Kitty reappeared on August 27 after not having been seen since mid July. She'd looked so ratty then that I thought she'd disappeared for good.

Black Kitty disguises himself as water in the birdbath, ever hopeful. Sorry that this long shot with small camera through a window is fuzzy. Perhaps I shouldn't blame the camera so much as my own shaky hands.


Water aerobics has been resumed.  My bones are thinning, so says my bone scan. And my son-in-law, who does body work, says that unless I get busy and do weight bearing exercises, they'll be burying me after I break a hip. (I actually paused over that choice.) After following Billie Jo's water aerobics instructions for 20 years, the moves come back, but I'm so ambivalent about exercise, knowing it's good and necessary, but it's hard to convince myself when it makes back and hip pain worse.

And . . . Thursdays Out  We had eight ladies last week and 10 this week at NeedleCrafts and a few finished projects to show off.

Rose's sox are made from a yarn that intentionally makes sox that don't match, à la mode du jour. Rose demands symmetry in sox and outmaneuvered the system.


And another pair of Rose's: 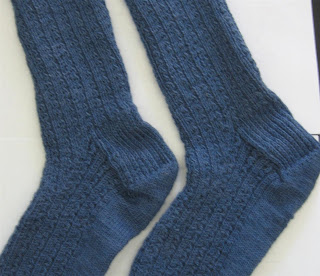 Barbara knit a few baby hats while traveling. (Barbara knits when she's not traveling, too.) 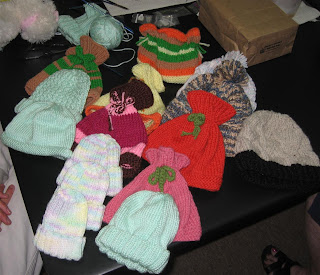 Terri's birdy has been molting, so Terri is making a feather necklace. 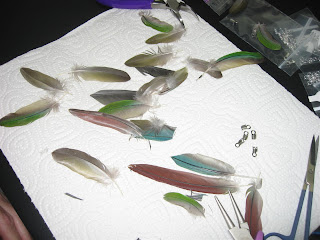 Sister is making flowers. Well, not so much making as making longer. Stems, that is. 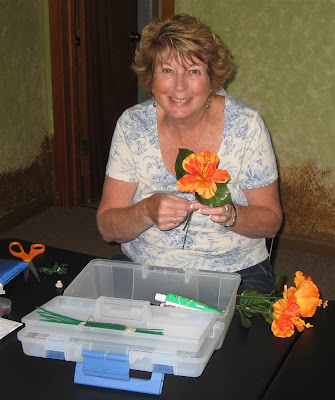 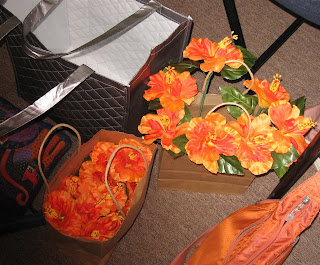 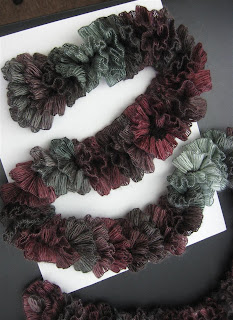 As for my project, no pictures. I'm still sorting boxes and buckets of papers. Week after week. Ursula doesn't understand how I have so many papers to sort. (People who've never cleared off all the tables and put the papers in boxes and put the boxes in the garage so that the family will have a place to eat Christmas dinner have no idea how this happens. People who have, do.)

Each time I arrive at Thursdays with boxes or buckets, she says "I would just toss it all in the trash."

And I always respond that I can't. For all I know the deed to the house could be in one of those boxes.

She leaves before our senior lunch, preferring to make her own at home, so she missed my afternoon "find" among the papers yesterday. There were a few cards in the pile, several years old, things I'd obviously wanted to hold onto. A grandson's high school graduation announcement and photo. Large photos of the same grandson, in fatigues just before his deployment to Afghanistan, and with his family. A Christmas card from my stepdaughter and family, with a gift card for Borders. Yikes!

I didn't know whether there was still anything to be had from Borders, so I went online and with that gift card + 90¢ from another gift card + a bit on my credit card, I got the 6 disc series "The Pacific," brought to us by the Tom Hanks and Steven Spielberg team, to sit beside "Band of Brothers."  It sounds like Borders is close to the end.