I think the kitchen boycott must have begun Thursday. Sister and I went to NeedleCrafts and had the Senior Lunch there that day. Brother-in-Law even came down to The Little House to join us. Sister and I attended an evening session of water aerobics which didn't get over until nearly 8 o'clock, and who wants to cook at 8 o'clock? (What a glorious exercise session, with the pool water warmer than the evening air and the pool lights coming on as the sky darkened.) BIL met us at the pool and we went on downtown to the Mexican restaurant.

I took pictures of the great construction project when I stopped to pick up sister. They're getting ready for another big pour next Wednesday. 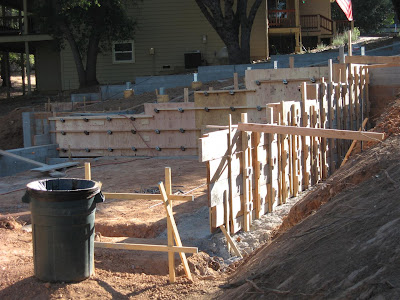 That Thursday session had been Sister's first water aerobics experience and she woke up too sore Friday morning to go to the morning session. As I recall, I felt similarly; twelve hours just isn't enough time between sessions. I had no good reason to leave the house that day. I had leftover Mexican food for dinner and lots of things to do around the place.

I'd revitalized enough by Saturday morning to go hop around in the water -- delightfully uncrowded early on that holiday morning.

Sister slept in, but came up with the almost-too-late-in-the-day thought that we should go to dinner at our local nice dining place. The restaurant relented and gave us a 5:30 reservation, the only time left in the schedule, except for 5 o'clock. I ate a small dinner, having seen the tray of killer desserts on display as we entered the dining room. Even before we selected our dessert, Sister and I had discussed walking to her house from the restaurant to make up for her sleeping through water aerobics.

How far do you think it is? she asked.

I mentally reviewed the rights and lefts of the route. Not sure, but most of it is downhill. We might meet up with the attack turkey, so we both brought along walking sticks, for all the good they'd do. (There's a turkey that chases people . . . we have photos if sister can figure out how to get them out of her phone without having a data plan.)

We selected the malt chocolate cake, or chocolate malt, or whatever it was called, with its six sinful layers making it probably 6 inches tall and 4 inches along the back. The frosting on top was as thick as fudge. We split it and it would have been plenty for two more people (or at least one more if BIL hadn't wanted the berry cobbler with ice cream). At this point, walking home became obligatory, so BIL took the car with instructions to measure the distance.

We had a short uphill stroll to get out of the parking lot and a very brief and gentle one at the end of the trip, but otherwise, it was downhill, some of it steeply downhill, all the way. We did walk very gingerly. I've been spooked since my fall. I'd never been spooked after other falls, but, then, I'd never fallen on my face. That and all these threats of broken hips, including from the bone scan folks. We left the restaurant a little after seven, still light out, and didn't arrive until nearly eight, in the dark. Yikes! At least we didn't encounter the turkey.

How far was it, we asked BIL.

This morning, I was too sore to get up for water aerobics after that downhill marathon, and Sister said she wouldn't go without me. We have a Monday morning date, set to go. On the plus side of no exercise, we were able to leave a little earlier for the Rebekah Breakfast downtown. ("Downtown" in our little town is two blocks along one side of the highway and 3½ blocks along the other side, because none of the blocks matches up to form a crossing intersection.) After stuffing ourselves with eggs and pancakes and bacon and coffee, we went for gas, for a spin around the hardware store, and a foray into the thrift store. Someone or something stole the water "dishes" (i.e., plastic cookie containers) I used for the outside cats, two nights in a row, so I bought them four coffee mugs that are a little heavier than the plastic containers.  Half price sale.

And then I took a nap until it was time to go to the historical society's BBQ and museum expansion fundraiser, held at the picnic grounds at the community stables. We were greeted by these early Californians: 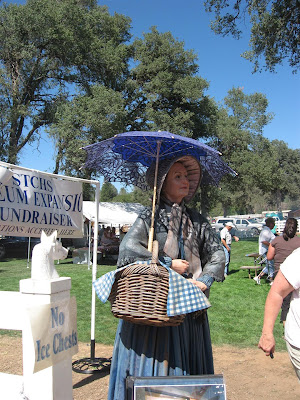 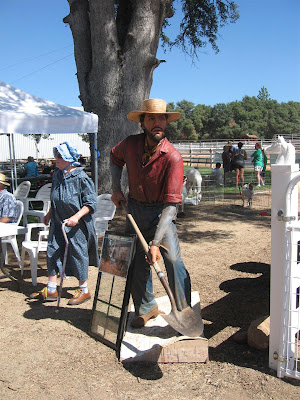 There will be a silent auction: 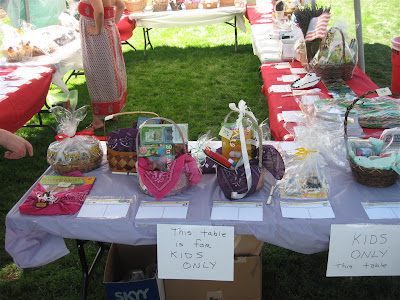 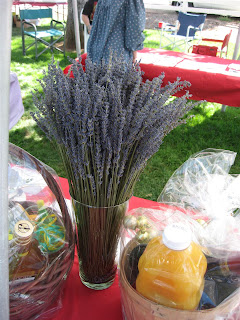 One of the big events of the day is the fly-by by our local "air force," and aerobatics by Wayne Handley. I took many photos which captured only blue sky, with the occasional one accidentally containing a small airplane. Luck of the draw. Attempts to catch the aerobatics yielded only vertical cigar-shaped dots. Click photos to see a larger view. 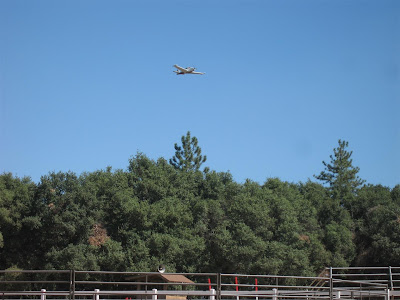 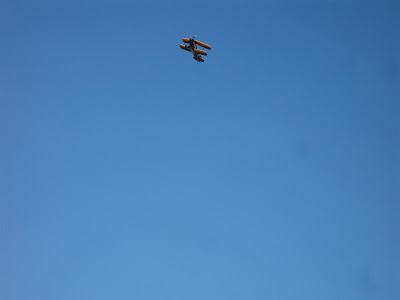 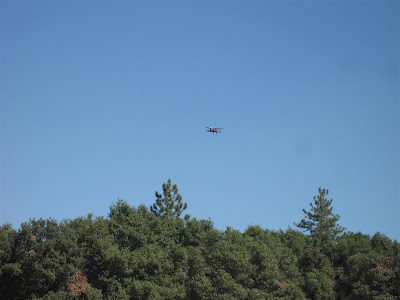 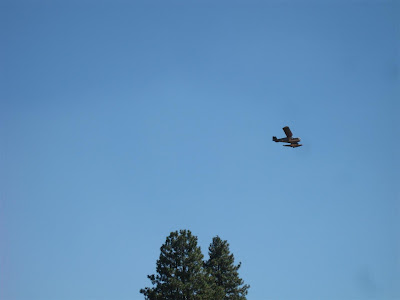 There were animals for the children (and adults) to enjoy: 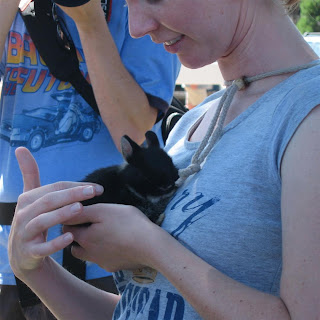 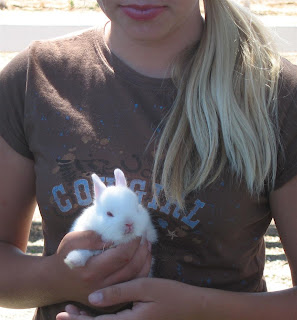 I thought at first this was a little llama, but on further reflection, think it may be an alpaca. Shoulda asked! 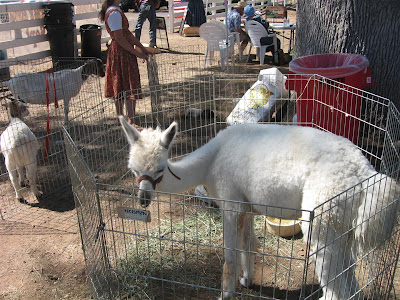 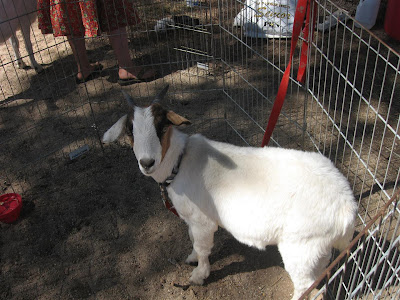 I had a brief stint in the bake sale booth, but the whole thing was being brilliantly handled by a high school girl who was earning school credit for community service.

On to food and festivities: 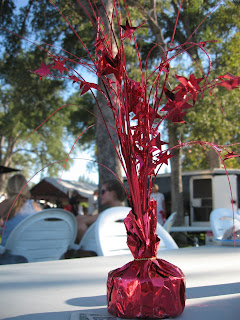 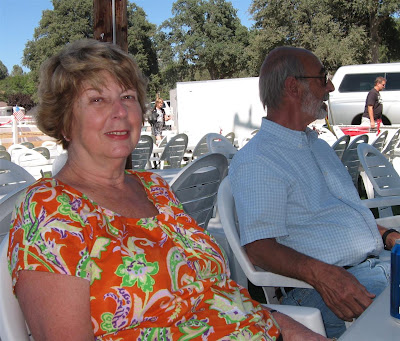 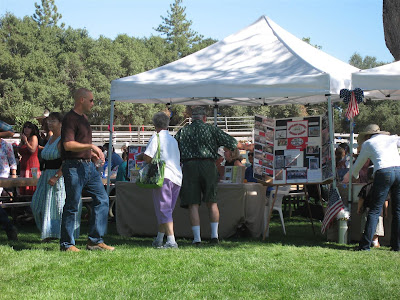 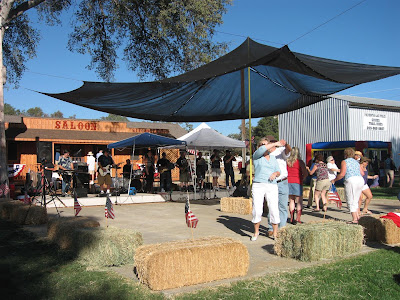 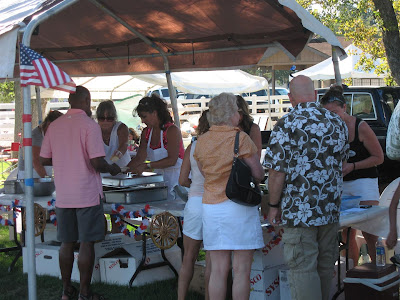 Relaxing with food and beverage 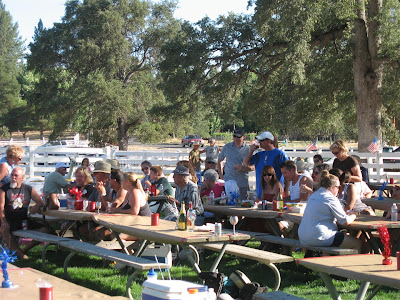 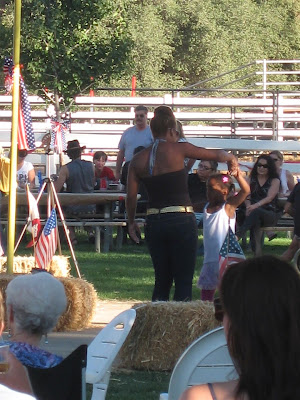 And as the sun sinks in the west, Sister carries a lovely little watermelon home. 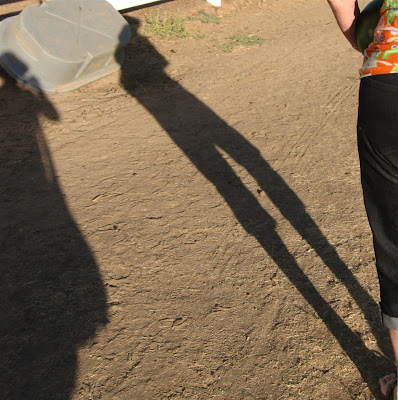