Let's get rid of the set-up for the photos that went on ad nauseam and do the short-hand version.

Thus, after retirement to our mountain community, I'm persuaded to go on a Caribbean cruise by Husband, armed with Sea-bands and those anti-nausea patches for back-up. (I think Husband had Sister-envy, as she and her husband knew cruise captains by their first names, so often did they cruise.)

Here's my favorite cruise photo, the two of us at life boat drill. Catch that permed hairdo, the last of the 'fro era. Is that a fashion statement, or what? 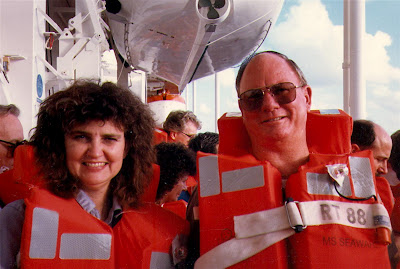 One of the major shore trips on a Caribbean cruise is the climb up Dunn Falls at Ocho Rios, Jamaica. I'm a non-swimmer, so had no intention of climbing up steep slippery rocks in cold, fast-running water. Furthermore, this person who was born carsick has very poor balance. I just planned to go for a look-see of the falls.

I suppose there were others from our travel group that walked down the steep trail beside the falls. Then we were at the bottom at a gate where admission was being charged and Husband wanted to go and I just got swept away with the crowd. By the time I got a look at the falls to size them up, it was too late to turn back. 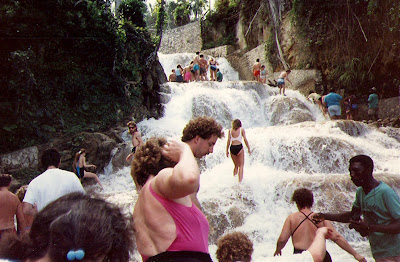 Our guide up the falls collected cameras from us to take our pictures later up the falls. We were supposed to hold hands in a big chain, which saved me but caused difficulty for those whose progress I impeded. I was in abject terror the whole time.

We finally came to a level-ish area for the photos. The guide clicked each camera, one shot each. I knew my picture had gone horribly wrong. Big fat left hand that popped up suddenly covers my face and Husband isn't even in the picture. 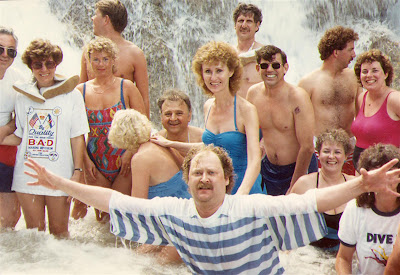 Does anybody know this big jerk who jumped up in front of me so that I risked life and limb for my one and only climb up the falls and didn't even get a frigging picture?

The next stretch of the falls was purely vertical. I bailed. I struggled out of the river and up the bank onto the trail for a dry land climb.

And the Sea-Band thing? We were seated in the dining room in the back of the ship at a picture window for our departure from Miami Harbor on that first day. We got underway, then the ship did a sweeping turn to head out to sea, and all little semi-circular canals in my ears went tilt and my stomach flipped and things never felt quite right after that, despite slapping on the anti-nausea patches and soliciting Bonine from the pursers. I think my discomfort may have been exacerbated by a migraine which eventually joined in with the existing upset.

So, if you're prone to motion sickness, don't believe the people who tell you you can't even feel the motion of a cruise ship. Rock ... rock ... rock .. rock ... And it lasts for days after you're back on solid ground.