Thursdays Out . . . Bumps in the Road


You can see Chloe looked alert enough after she got back from her haircut on Wednesday. When she emerge from her carrier, Henley came up to touch noses with her, while her nemesis, Jean-Luc, hung back at a distance, hunkered down, his eyes as wide as saucers. What the hell is that? So when Sister asked me if I wanted to go out for dinner with her and Brother-in-Law, it seemed safe to go.

﻿ ﻿
﻿
﻿
When I got home, Chloe was scrunched up on the window seat in the computer room, eyelids at half mast, looking like she didn't feel so hot. There were some random kitty barfs around the house.  She refused blandishments of food, sniffing at them, then turning away as if the odor was distasteful, shrinking into her little spot. The long ride with its fright and curvy roads, fasting the night before, anesthesia, intubation, shots, pills, any and all of these things could have left her feeling bad or hurting.

I left food and water for her at bedtime and went to sleep, worried about my kitty.

On Thursday morning, her food and water were untouched and she was missing from her little nest. I couldn't find her and began to fear the worst, but eventually she appeared at the opposite end of the window seat. When she was at the vet for grooming, they said she'd lost 1½ lbs in the last year, and that morning, she felt even scrawnier. I felt she at least needed fluids, and after consultation with Sister-nurse, I called the vet, who did recommend the fluids, appetite stimulants and some medication to deal with hyperthyroidism, which had been revealed in a lab test prompted by her weight loss. I could take her into the satellite clinic in our little town to get the fluids administered.

It was Thursday, as in Thursdays Out/NeedleCrafts ... It's my job to open up, so some phasing of the day was required. I dropped Chloe at the vet a little before 10, and Jennifer the tech infused Chloe while I held her. Vet's orders for the other stuff still hadn't arrived, but I was able to leave Chloe there while I was at NeedleCrafts, knowing that she was in good hands. It was also the day that the deck refinishing would be started. I left a note for Deck Guy with my cell number, and BIL's, in case his visiting truck proved to be in the way.

We had another new lady at NeedleCrafts this week. Sandy is into a myriad of crafts and several of our other ladies already know her. We had eight there, even with three regulars and a couple of occasionals missing. After years of consisting of a very small core of people, small enough that we'd often have to cancel if more than one would be absent, the group is large enough now to continue through our various comings and goings. Nice!

After NeedleCrafts I went back to the vet's to pick up Chloe. Jennifer had put food in the cage for Chloe, who hissed at her for her trouble, so Jennifer hadn't attempted to do anything else to my wild cat unassisted. Again I held Chloe while Jennifer pilled her and gave her a shot. Chloe was nicely alert and plumped out some from her infusion. I'd considered and rejected dropping by Sister's so she could get a look at Chloe and I could see the latest installment of bulldozers in action. And then I turned on their street anyway. Chloe was fairly talkative and not in her terrified voice. She made a beeline for the litter box the moment we got home. She was trying to tell me something.

Deck Guy had pressure-washed front and back decks and applied a cleaner that would remove previous color that had gone blotchy. He continued on for the rest of the day, washing off the product. He left it to dry overnight.

I took Chloe into my bedroom where I lay down to read on the bed. That is a Chloe magnet, and she did come up and tromp around on my chest between my face and book, purring. That buoyed me, as did her consumption of some kitty treats, followed up by some of the outside kitties' food, which looks like something different from the regular.

Thursday night was a not quite full moon. My moon chart says tonight's is 100% full, but here's Thursday's moon, fuzzed out by its own brightness. I closed Chloe in my room that night, so I wouldn't have to go looking for her in the morning. During the day she ate a few treats and a small plate of the same food she'd rejected when it was offered by Jennifer. 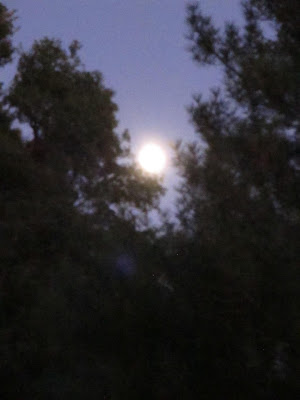 Today Deck Guy sanded the deck, so it'll be Monday before he puts on the protective coating. I haven't seen what it looks like. It'll be a surprise.


﻿ ﻿  ﻿
﻿
By this evening, Chloe's improvement doesn't seem to be lasting. As a precaution against having to haul her off to the way-distant emergency vet on the weekend, I picked up a bag of fluid from the vet so Sister and I can hydrate Chloe if she needs it. This evening she ate some kitten food with great relish, but then upchucked the whole thing. I have to pill this poor kitty twice a day, the kitty who is so terrified of being restrained. My bedtime task.


See you tomorrow, or when I can. I have a newsletter to finish for Soroptimist.