I'm heading into a weekend that has nothing on the calendar. Whew! I hope I'll make good use of "spare time" to catch up on ... well, there's always plenty to catch up on. I have an appointment (or appointments) on Monday for PMs (preventive maintenance, not PMS) on seven or eight appliances covered by Sssss* Protection Agreement. When I renewed this agreement last year, the salesman told me my classic 21-year-old steel appliances should never be abandoned, since the quality of manufacturing back then was superior. In fact, they could be sold on eBay for. ... I'm not sure whether I was buying his spiel, but at least it dissuaded me from rushing out to buy more stylish appliances. I'd been having an inferiority complex after watching first time home buyers on HGTV disparage a kitchen that rather resembled mine as "this is sooo outdated. It will have to go." "It looks like my gramma's," adds her prepubescent husband.

Well, I could be his "gramma." I could be his great-grandma. And I like my kitchen. All this is neither here nor there.  I just need to make sure my washing machine is not washing, my oven is not baking, and my dishwasher and compactor are empty on Monday morning. I'll be wishing that my water heater is heating better.

I went to the grocery store and did a big shopping on the wrong day, so didn't get the senior discount. I did, however, get an awesome receipt. It said I was owed $4,005.30 in change. After the cashier and I did a double-take, we determined that I had not actually presented $4,040 to pay for my groceries. So all's well, and her cash drawer should balance. 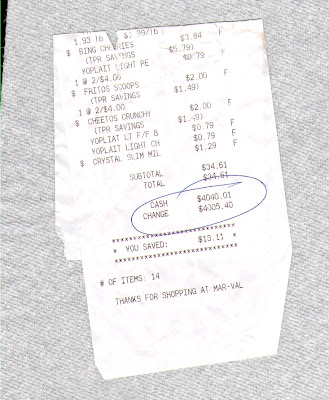 This has been a busy week. Sister and Brother-in-Law were here in the mountains to meet with their builder -- the builder of the garage that will house their collected cars, the garage that will have the door that BIL was mentally comparing to the door at the fire station when the FD's Hawaiian BBQ got rained in. So I took Sister with me to a Tuesday Soroptimist meeting. One of our members and her husband, a Rotarian, were presenting the program.  They spend time each year in Guatemalan rural villages, working to improve the lives of children by improving their educational opportunities. They've participated in school building and water delivery projects and making improvements to the physical facilities, but now the most urgent need is to help the children get their education. There is no public school beyond -- I believe it is -- the 8th grade, and any further education must be paid for by the families, who have little income, or by someone else. If there is money to educate a child, it will be used for a boy. Soroptimist's involvement, both organizationally and individually, consists primarily of providing scholarships to girls. With an education, they are able to find employment and escape a cycle where young girls get pregnant and end up selling themselves to support their families. Bob and Jan give us an annual progress report.

I had another medical appointment day in the little city down the hill on Wednesday. Why, I want to know, was there more traffic going both up and down the hill than I've ever seen on a weekday? Traffic like that belongs on a holiday weekend. I'm not ordinarily discombobulated by traffic; well, maybe a little if someone is just plain poking along. It was for the bone density scan that got postponed. I'd had the order in my car ready to go when the scan got postponed due to construction dislocation. On Tuesday I glanced at the place where I stuff orders that need to be brought to the next appointment some months down the line, just glanced, didn't pick it up. Didn't have it when they asked me for it, couldn't think where my insurance cards were. They scanned me without waiting for the fax they said they'd send for. I'm not sure they took the shot they were supposed to.

En route to the optometrist (postponed from the double-vehicle non-starter incident), I stopped to buy a two-pound bag of locally roasted French Roast coffee. Grinding it creates a perfect mess, with electrostatically charged fine-ground coffee overflowing the bag (bag is too tall to fit under grinder spout), fluffing around the table, dribbling off to the floor, and clinging to my hands and brushing off on my cream-colored pants. I was going to ask for advice about handling this problem, but I feel a possible solution tickling at my mind.

As for the optometrist, no new glasses are needed yet. These frames will probably come back into style again, since I don't want to buy new ones until I need new lenses. It's been years!

Which finally brings us to Thursday, the title day. I didn't expect too many people at NeedleCrafts today, since several there last week said they'd be absent. We did better than that expectation, six total, including a lady who'd been here twice while I was traipsing through Provence, but whom I met for the first time today. She's a part-timer in the mountains here, so won't be in every week. She had a intriguing knitting project, a ribbony scarf made with only four stitches. As a non-knitter I can't describe what she did to make it all fluffy, but our knitters were fascinated.

﻿ ﻿
We didn't notice for awhile, but there was all kinds of interesting activity just outside our window: men swinging from trees. 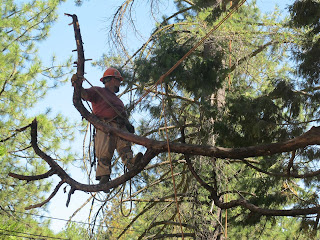 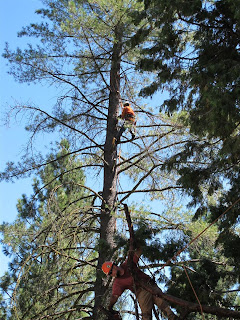 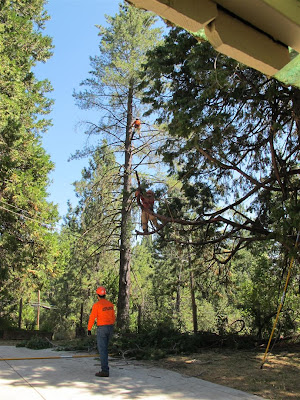 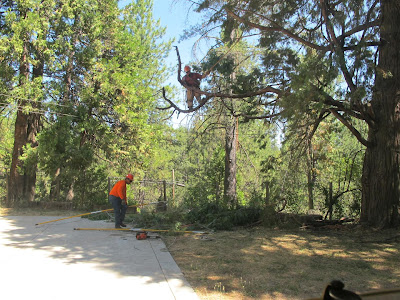 Of course, when they fired up the chain saws, that kind of gave it away and we closed the door which we'd left open for the delightful fresh air.

Being first Thursday, it was also board meeting day for the Computer Users Group. We're preparing for the August BBQ and getting the reservation list together. Two of our members are on a trip/cruise in Alaska and through the miracle of Facebook I asked them whether they planned to attend the event. Not too much later I got their confirmation and menu choice from Skagway.