Mugging for the Camera

"Falling was your body's weird way of making you REST!" So said Delana, commenting on my falling on my face. I slacked off on blogging for a couple of days, but that's about it. When I got up Tuesday morning, before I took my dive, my Chloe kitty did not seem to be doing well. She'd started sneezing a day or two earlier and although alert, she was hunkered down on the window seat, not eating, not drinking, beginning to look dehydrated again. I'd planned to take her in to the vet or get Sister to help me give her some subcutaneous fluid. All of that fell aside, what with tending to my little mishap.

By Wednesday morning, Chloe snuffled and snorted with nasal congestion and, although she looked like she wanted to eat, she wouldn't or couldn't. Brother-in-Law and I dropped her off at the vet on our way to assist in the Excel class, while Sister headed back to the big city for a doctor's appointment. In a weird coincidence, the teacher of the class had fallen on her left check the previous weekend and had a mirrored pattern of bruises, although more faded.

I dropped by later to see what was happening with Chloe. She has an upper respiratory infection and needs some aggressive treatment to get her back to health and onto a treatment for hyperthyroid. If she were two or three years older, I might just keep her comfortable, but as weak as she was, she fought like a tiger when I put her in her carrier, so the spirit is there. I can't just let her waste away on the window seat. So she went to the vet hospital for a few days.

My Wednesday still wasn't over until I got my nails and grocery shopping done.

Thursday is NeedleCrafts and we had a new combination of eight people. There were some nice projects underway and finished. Sigh.  No pictures. I think my good camera can be repaired. It still takes pictures, despite the broken LCD. I just can't aim them (can't see beans through the viewfinder) or see whether I like what I took. The scuffs on the case can be its battle scars.

I called down to the vet hospital late in the morning as instructed for a Chloe update. Word from the back room was that the vet wanted to talk to me. He'd call back.

No call back by lunch time. Our senior lunch was big enough to provide me with 2½ meals. (Well, someone gave me their pineapple-cottage cheese.)

My "sewing project" was to "declutter" a box I couldn't lift, labeled "2008 coffee table contents." It truly pained me to toss beautiful unread issues of Cat Fancy and France magazines onto the recycle pile, same for CatWatch and Catnip newsletters which I've been saving forever, and many others.

I'm not ready to part with newsletters I wrote back in the mimeograph days. (If I dig deeper will I find earlier Ditto editions? Anybody else out there remember Ditto machines and the intoxicating toxic fumes that rose from the freshly-printed damp paper?) These only take up one thick notebook.

I went through folders I'd set up to collect writing ideas. Judging by the opinion articles from the Vietnam war era, I've had it quite awhile. There were political cartoons that could well be recycled now. And autobiographical stuff written close in time to events which fade in my recollections. I tossed some, saved others for closer review. If any of you wanted those Vietnam articles, I tossed them. I have no plans to write about the era.

It's a declutter start!

I went home and I still didn't hear from the vet. I was bawling my head off, trying to figure out who could drive me down to the vet hospital if my kitty had to be put to sleep, since I would need to be with her, someone who could handle me in complete meltdown.

But finally he called, at the end of the afternoon. It was not the dire news I'd feared. He's very cautious in what he says, but there's modest optimism with the treatments and feeding. He called again today and she is much the same. I prefer she spend the weekend in the hospital rather than risk a relapse at home over a weekend.

(Why do we or our pets get sick on weekends?)

I'm not completely without photos, having some pics of Henley and Jean-Luc taken just before my camera got blitzed.

Here, Henley helps me with the laundry. I toss laundered cleaning rags on the chair preparatory to folding them. Henley immediately jumps into them, defying me and my attempts to fold. 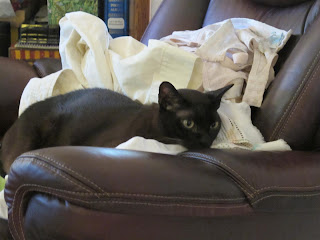 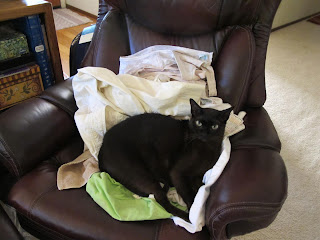 Next day, Jean-Luc unfolds them by scrambling into the bucket as Angie makes her cleaning rounds. 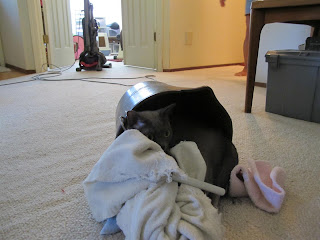 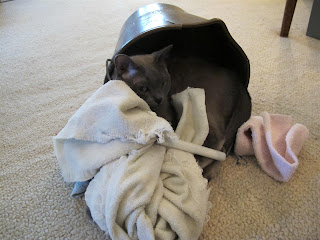 And I do have a Web cam on my computer and I couldn't resist mugging for it with my colorful eye. It looks like I'm wearing clown makeup.

Row 1 was taken Tuesday evening, the first night.
Row 2 was taken Wednesday evening. That's the hat I wore when I was out all day Wednesday and Thursday.
Row 3 is from this afternoon, day four. I suddenly noticed my shoulder is bruised, too. 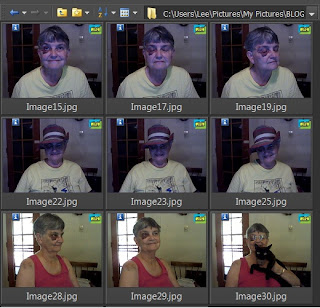 It doesn't look like it's getting much better, does it?

Today I did relax some. I have to say, the two-star Tuesday Sudoku is way too hard for a two-star and Wednesday's crossword was written by someone whose interests must not intersect mine at any point.