My Monday morning was booked several weeks ago: seven appliances would receive their complimentary preventive maintenance visit. Between 8 a.m. and noon. Meanwhile, over the weekend a list developed of other things to do this week. I could do the arranging for these between 8 and noon.

Bright and early Brother-In-Law arrived with his truck, which will remain at my house until garage construction at their house is far enough along to allow parking there. The bulldozer is there already. They start today.

One of the things I needed to arrange was semi-urgent. During a dermatology appointment two weeks ago, I'd had a funny little flat thing that had changed colors removed from just above my knee for biopsy. I'm assuming no news is good news on that, but meanwhile the wound hasn't healed and has developed a rash. I won't show the photos that got inspected by Sister-nurse and her nurse friends, but they recommended having someone take a look at it. I wanted my doctor here on the hill to check it out. At first he wasn't available today, then an opening showed up late in the afternoon. I'm now trying a prescription ointment.

On Wednesday, Chloe has to go down the hill for a joint appointment with a groomer and the vet to get shaved under anesthesia.  She won't let anyone handle her and her fur is severely matted on her belly and in her "tail feathers," which is what I call that long hair on the back of her back legs and rear end.

﻿﻿ ﻿﻿
This process may or may not take all day. Since the vet is a few blocks from the Ford dealer, it seems like a good opportunity to get that "oil change required" message turned off. Except that the power company is going to have the power turned off at the dealership at my preferred time. We're trying for a little later. Let's hope power is restored when they say it will be.

I called my pest control guy about the ant invasion of the cat food on the deck. He sprayed, then poked his toe into nail-cracked deck planks and suggested a termite inspection.

The first appliance service guy to appear took care of five appliances. All are doing well, although symptoms of putting too much detergent in the dishwasher were pointed out.

I had lunch.  But I still hadn't heard from anyone (or two) for the two remaining appliances, one being the water heater. I'd avoided using hot water all Sunday afternoon and early Monday so I could demonstrate that it wasn't maintaining heat, but only fired up after I placed demand on the system. The first service guy had run washer and dishwasher, so my hot water was nicely reheated despite my best-laid plans. Sigh.

By 1:30 I called to see whether I was still on the schedule. "Looks like about an hour," I was told. He appeared in about an hour, reminiscing that he was the one who discovered the fairly serious water heater leak two years ago that had required a new water heater. The replacement water heater is apparently okay, but the recirculation system is ... well, I don't think he left the diagram he drew on a box in explaining the problem. "Call a plumber," he said.

He scolded me for not having called him back for over two years. The fur and dust under the front of the refrigerator had almost blocked all the air flow. "Call every year," he said.

I will. If I take that grill off the bottom of the refrigerator, I can never get it back on.

That's when the phone rang with the info that the doctor would be available shortly, if I could make it.  I could, and afterwards I dropped by Sister and BILs to see the bulldozing. They were done for the day, ... so many oak trees removed. The saddest one to go was a beautiful black oak that was right plunk in the middle of the future driveway. I did find two seedlings that look like they're from that tree. There ought to be more around there somewhere. 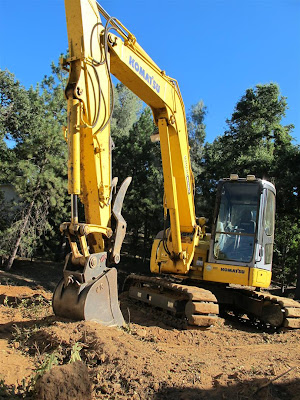 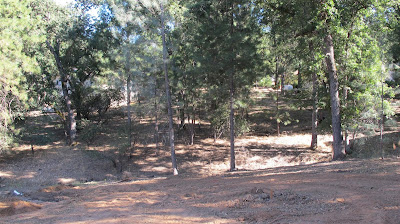 SISTER, do you want pots to put the little oaks in to keep them out of the way of construction?