I have another one of those busy weeks in store. At least that was the plan.

Monday Deck Guy returned to start the staining. Angie came to clean. I worked on the Soroptimist newsletter until about 2 a.m. Tuesday morning and "put it to bed," ready to go to a proofreader.

This morning, Tuesday, once the sun came up again, Deck Guy was due back for a relatively short session to finish up. Heater/AC Guy was due to check and service my A/C (that's air conditioner, not aircraft in case any of you pilots are reading this). Happily, this was an already-paid-for part of a yearly contract.
﻿
I had to leave the house by 10:30 to pick up sister, who would hang out during a brief Soroptimist committee meeting, then go to the luncheon and business meeting with me. (Sister is a good candidate to join one day, after she moves up to the mountains.)

We'd have an afternoon break, then pick up Brother-in-Law to go to the computer club summer BBQ for dinner. I'm the moneybags for that organization, so have been collecting the token member contribution for this dues-subsidized event. (Email newsletters have become a great money-saving boon for organizations.)

Wednesday I'm helping out in a beginner-beginner class on MS Excel that's being offered at The Little House (senior/community center). BIL will also assist, as Sister has to head back to the city for a doctor's appointment . . . followed by a nail appointment. I need the nails strong but not long or I snag the wrong computer keys.

Thursday will be "Thursday Out" for NeedleCrafts, then let's hope it's implementation time for DeCluttering Fast on Friday and the weekend.

Only there was a slight slip twixt cup and lip, if I remember that old saying correctly. Today, Deck Guy came, AC Guy came and went, Deck Guy went, payment in hand, and I left to pick up Sister.

We parked midway between the post office and the meeting venues. We were early enough to walk up to check our mail and inquire about packages we each should have received, but hadn't. Then we headed for the committee meeting at the Tea Shoppe. We were striding along the sidewalk, me pondering that no one else was on the street so we must be running late. I was looking ahead, thinking around the corner, through the patio, into the shoppe, closed today except for our committee meeting. As we narrowed the gap, I could see the gate was open and, with my next step, my toe ticked something imperceptible and I fought the inevitable fall by trying to outrun it. (Sister said she tried to grab me and just I flew away from her grasp.) I hoped to catch one of the supports for the porch over the sidewalk but hurtled on by. Even recently I'd said that when I fall, I've been very fortunate to manage to do a tuck-and-roll, which avoids my landing on my face or head. Knock on wood. My biggest dread is tearing a hole in the knee(s) of my pants. (Skinned knees heal, pants don't.)

For the first time in recent memory, I heard and felt the crunch of cheekbone on pavement, along with an abrasive grinding at a knee. (Damn. There go the Not-Your-Daughter's-Jeans. You NYDJ-wearers know they ain't cheap!)

I don't get up immediately when I fall, which happens enough to phrase this as habitual, resisting the embarrassment that makes you want to spring up and brush yourself off and go about your business.

Immediately there were people hovering over me, many Soroptimists from the meeting, a voice calling out should I call 9-1-1? and and me saying I don't think so and asking Sister-nurse whether she concurs.

Here I am, conspicuously lying at the edge of a state highway which squeezes through our small town on the way to Yosemite at 11 a.m. on a Summer's day. Soroptimists shaded me, firemen/EMTs eventually sat me up to lean on that post I'd missed when I'd tried to grab it. Was poked and prodded in places that might be injured, then after agreeing to go to the local clinic to get my bleeding eyebrow taken care of, declined an ambulance to the hospital down the hill. As a final flourish in proving I was oriented to time and place, I dated my "decline" with a flourish. I have too many things to do today.

Sister fetched my car and took me to the clinic. My doctor was backed up but the Physician's Assistant could see me right away. We got back to the Soroptimist luncheon meeting at the hotel in time to get the last of the buffet lunch, the entire meeting, and applause for showing up.

The LCD display on my Canon G11 camera was a casualty. Sister found the camera at least 10 feet away.

My glasses were akimbo. I bent them back a bit, but not enough to allow each eye to look through the same level in my trifocals. Wobbly world! We have an optician in our little town and after lunch we went to have her do an adjustment. She told me that it's recommended that an eye be dilated and examined after being smacked upside the head, especially since my vision seemed a little fuzzy. Long story short, we ended up going to the ophthalmologist in the little city down the hill.  No injury as a result of the crash but I did get other ophthalmologic results, revealing -- sigh -- the earliest stages of cataracts.

People at the computer club were still mighty fuzzy to my dilated eyes. I relied on those who hadn't paid to deliver their payments to me, since I couldn't read my list. Practically all of them had driven by the mini-drama today, not realizing it was someone they knew.  Actually, in a small town, odds of knowing someone or someone who knows someone who knows are reasonably high. No BBQ pics, given the sad condition of my camera. I'll have to go back to using my little camera until I find out if the big one can be repaired. 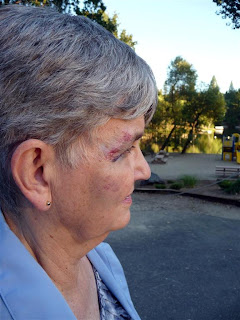 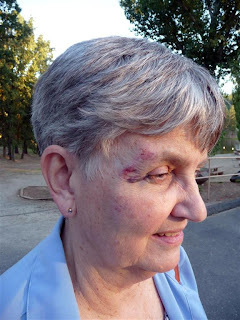 I can tell you by how I feel tonight that I'll be pretty darned sore tomorrow. And I've already tried on a couple of hats to see whether I can pull a brim far enough over the injury to keep from scaring Excel students and small children.

I'm worried about Chloe. She hasn't been eating or drinking although she's alert and talks to me with pitiful meows.

Email ThisBlogThis!Share to TwitterShare to FacebookShare to Pinterest
Labels: Repairs