Seventy-five years ago today, Momma and Papa got married in Pasadena, California. Pop was a stained glass artist and Mom was a social worker until my birth ten months later. They celebrated their 67th anniversary before Papa passed away at 94. Momma died three years ago at 95-and-a-half, as she made sure to point out. Here are the bride and groom those many years ago:

﻿ ﻿
Mom's younger sister was her maid of honor:


Here is her formal bridal picture:
﻿ ﻿
They honeymooned in Blue Jay, San Bernardino County, California.
﻿ ﻿
They returned to the "same" cabin for a second honeymoon, years later. This photo isn't dated, so I can't tell you when it was taken.
﻿ ﻿
I suspect it was more recent than this 40th Anniversary celebration.﻿﻿
﻿﻿
Mom is in the blue shirt, Pop behind her, Sister to the right in red and me on the end in the pigtails.


Sister and I threw a big 50th Anniversary party for them at their Senior Community in Oceanside, CA.
﻿ ﻿
﻿﻿
﻿﻿

This is the last picture I took of Mom and Dad together, on March, 2002, flanked by two of his windows. He did all of the windows in this church. 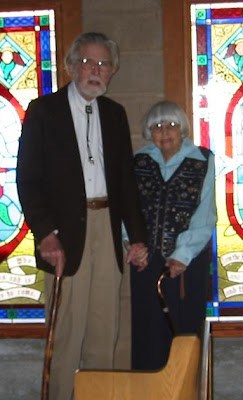 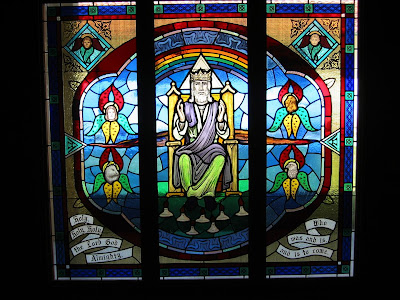 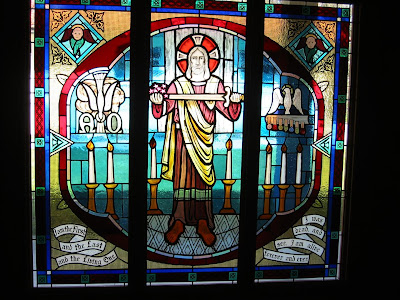 We miss you Momma and Daddy, and we're thinking of you.  Sister is out of town and not wired right now, so I'm including her in this thought.