No, I'm not talking about that bicycling thing, although that tour would start shortly. I'm talking about the longest, busiest day on the Lavender Ladies' Photo Tour de France. Or de Provence, more specifically. Every tour has at least one of those cram-packed days and this one was on July 1st, a simple Day in the Luberon, with dinner in the evening at Mrs. Lott's.


﻿ ﻿
Here's a map that locates each destination for the day. I haven't even tried to guess at routes between stops. We stayed at the villa in Ste-Cécile-les-Vignes, #1 on the map. Each day we ventured forth in our three cars, heading to our destinations for the day. Certain routes became familiar, but overall, without a map in hand, I had little to no sense of the relationship between all the various places we fanned out to.

We headed out from Ste-Cécile at 8:30 for l'Abbaye de Sénanque (#2). The final approach from the north was via a beautifully scenic, narrow, sinuous road rising up into craggy hills, then a turn into the valley with the Abbaye, with lavender fields just coming into bloom.


﻿
﻿ ﻿
﻿ ﻿
﻿ ﻿ ﻿ ﻿
﻿
We enter Gordes (#3), a well-known hilltop town, the "back" way through residential neighborhoods, not the usual one with the scenic way points with the view of the hilltop. Gordes made several appearances in "A Good Year" with Russell Crowe and Marion Cotillard. We weren't able to stop at the scenic viewpoint, but walked down from the hilltop to the edge of the village to shoot the surrounding valley and have Sister and my photos taken on Sister's camera.

We head next for Roussillon (#4), another hilltop village built on a red ochre outcropping which is unique to the spot.

﻿﻿ ﻿ What the heck! After lunch in Roussillon, we've traveled on to Bonnieux (#5) which the Lavender Ladies had not previously visited. And parked under this sign! 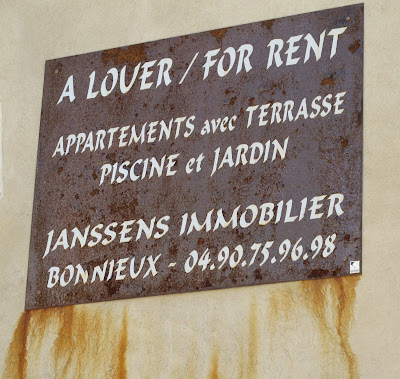 Now what did you think when you saw this sign? Most of our ladies were incredulous at this advert for a lover for rent. Some posed under it to post on their facebook pages. Those with a smattering or more of French missed the awe, reading it as it was meant (or not?), "À LOUER/FOR RENT." Simply "For Rent" in French and English. In case you were wondering, it's apartments with terrace, pool and garden.

Except for the excitement at the anticipation of finding a lover for rent, most of us were getting a bit pooped. After Beth and Lisa suggested the main sites to see might be . . .


Sister and I went across the street and sat down ...

An additional invitation had been extended to the group since the original itinerary was developed. A friend and business associate of Beth and Lisa's had invited us to his house for apéritifs. If I read the road signs correctly as they flashed by, Déo's house was near la Roque-sur-Pernes (#6), and the house had been built into caves. But we couldn't linger forever. We were due at Josianne's for dinner in Bedoin (#7). We didn't caravan, so some of us got slightly lost en route. Signs were not precisely as described. We eventually got there and we were not last, as Déo had car trouble on his way. One of our ladies had ridden with him, so razzing was in order over the old car-trouble excuse.


﻿ ﻿
﻿ ﻿
﻿﻿ ﻿﻿
Josianne and Alain had prepared us a lovely meal. They have very limited English but the grandchildren are able to speak it. The granddaughter was hesitant at first, but finally warmed up. A lot of the conversation consisted of pointing and gesturing and smiling. We thank them for their fine hospitality.

The ride back to Ste-Cécile was through the darkest of dark nights, on two-lane roads with very little to go with by way of landmarks. Trees. With dark vineyards and fields beyond them. Complete unfamiliarity, then the occasional evidence that we were not really in unfamiliar territory. We pulled in to the villa, bushed, at 11 or 12 or who really knows when, but full of memories of our longest day.

Email ThisBlogThis!Share to TwitterShare to FacebookShare to Pinterest
Labels: Provence