Rummaging in the Cupboard

It's travel time of year for the other NeedleCrafts ladies, in addition to me. They've been coming and going, hard to keep track of who said they be there from week to week. Terri planned to bring her bird in today to meet the ladies, but she no-showed. I learned later in the afternoon that her water heater had gone out, so she was stuck home waiting for the replacement. (I'll tell you, the day of the $65 water heater seems to be over. But why should I be surprised?)

That wasn't the end of her excitement for the day. She called this evening, speaking in a hushed tone. She and Gary were having dessert on their new swing in the garden when a nearby deer spooked and moved away. Next thing you know, a little brown bear was ambling up the hill toward them, apparently coveting dessert. No pots and pans handy to scare it away. Hmmm. Maybe I should send help??? She's headed for another road trip next week and has another pair of socks to work on. The nice thing about all the socks she knits is that she actually wears them. Between road trips, she is working on a sweater with no seams, thus avoiding "sewing together," which seems (heh heh) to be the bane of knitters' existence.
We have a new Judy, as distinguished from Judith, who is away this week. Judy is a collector of various things, as well as an avid crafter, except for crocheting. She'd opened a cupboard and found these little guys wrapped all wrapped up. 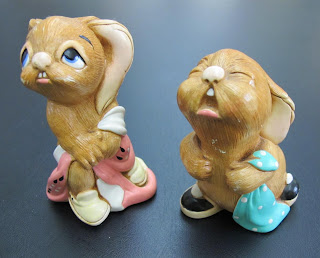 Because I knew I wouldn't remember who makes them, I took another picture: 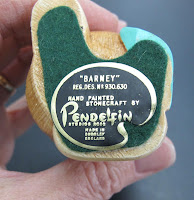 Now I have to admit I've forgotten something else. Paula unwrapped this embroidered tablecloth and the place mats and napkins, but I'm not sure whether she's the creator, or whether she was unwrapping them for Judy. 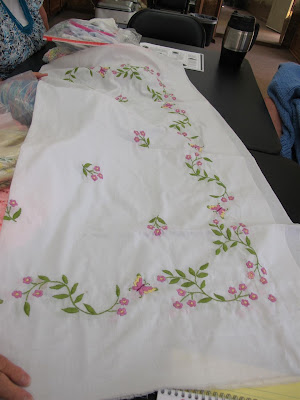 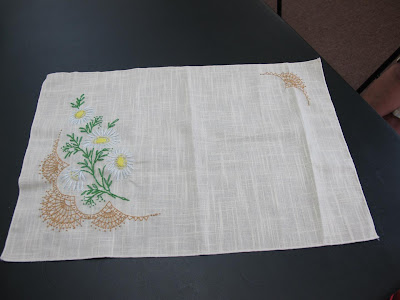 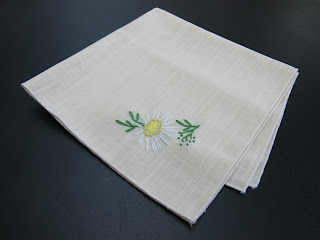 It is Judy who is working on this cross-stitch project. 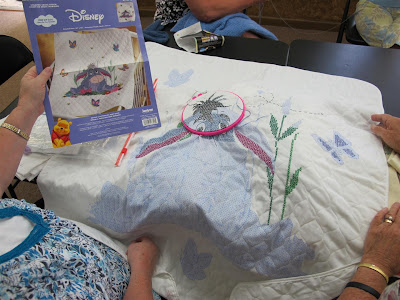