Mont Ventoux: The Other Mont

Mont Sainte-Victoire. Mont Ventoux. Two well-known mountains in Provence. I knew their names, having passed by them on numerous visits to the area. Years ago while on a tour, we went by coach (means "bus" in provider-speak) to a visitor center part way up one of them, then descended through quintessential Provence countryside that charmed me completely.

But, I hate to admit, I've rather interchanged them mentally. I knew one was outside of Aix-en-Provence, and the other was, well, somewhere farther north. Until I bought a local map on this trip, I had very little idea of the relationships between all the places I've visited.

Now I've got them figured out. The one down South, by Aix-en-Provence, much painted by Cézanne, is Mont Sainte-Victoire. It is a craggy stone peak that rises to 3,317 feet and has a cross on top. The one that popped up in the landscape of many of our forays out of Sainte-Cécile-les-Vignes is Mont Ventoux.


It rises to an imposing 6,273 feet and is frequently a stage in the Tour de France. It's bald on top, save for the electronic towers, and is believed by some to be above the timberline.  But according to Wikipedia and other sources, the baldness is man-made.

"Originally forested, Mont Ventoux was systematically stripped of trees from the 12th century onwards to serve the demands of the shipbuilders of the naval port of Toulon. Some areas have been reforested since 1860 with a variety of hardwood trees (such as holm oaks and beeches) as well as coniferous species, such as Atlas cedars and larches. A little higher, junipers are common."

This year's lavender ladies' tour included an optional trip to the top of Mont Ventoux on July 4th. Reports of precipitous dropoffs and narrow roads had almost deterred me, but I gritted my teeth and piled into the car with Sister and two others, and Lisa at the wheel. Our first attack at the climb ended when a dirt road petered out in the woods. Hmmm. This didn't look too Tour de France-y. We'd missed a turn somewhere and once set straight went up a perfectly good, but steep, road from Malaucene that wasn't even too scary when we ran out of trees.

The day had started chilly down below and was overcast over the mountain, and cold and windy at the top. The overcast muted what we hoped would be a spectacular vista of the entire countryside.

After we took the broad overview, we focused our lenses on the tiny flowers that spring forth from the calcareous rocks. 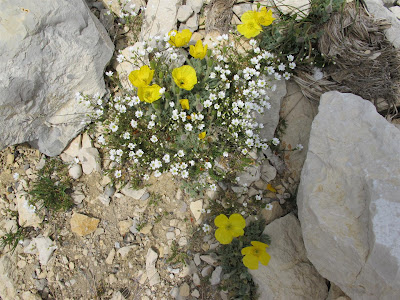 ﻿ ﻿
﻿﻿﻿ ﻿﻿﻿ We headed to market in Bedoin and had a wonderful lunch at an Italian restaurant.   Foody stuff will be included in a separate post.