Cowboys, Aliens and Dinner Out

Since two new batteries allowed me to start my truck, I got an appointment with the dealer yesterday to take care of a recall notice that had arrived in March. It was a computer-reprogramming thing.

It occurred to me that the same benign neglect that had led to the death of the batteries might also have affected lubrication and fluids, although I only had 1600 miles on the 2008 truck. So I called to add time to my appointment for servicing. Wow! Just like there are no $65 water heaters any more, there aren't any $19.95 lube jobs on V8 diesel trucks. It was a really sad thing to see how little business was going on at the dealership.

I'd decided that if the truck appointment didn't take too long, I'd treat myself to a movie afterward. It didn't, and I did.

The first two were "Crazy, Stupid, Love," which apparently is not one of those goofball comedies, and "Friends with Benefits," light amusement for a Friday afternoon.

Behind door #3 was "Cowboys and Aliens," not great cinema but an entertaining send up of both genres. I've always been a fan of westerns and of science fiction. (I'm a major fan of the space-western  Firefly, the series and its feature-length spin-offs, and the adorable Nathan Fillion).  I exclude, for reasons of arachnophobia, any movies with spider-like aliens. Viewer comments in reviews had described the aliens in this movie as frightening, that the suspense was overpowering, yada yada. 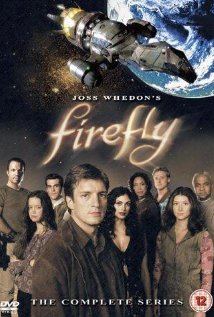 Yes, but are they spiders?  If you've seen previews of the alien aircraft in this movie, you can see where suspicion might arise. Should I go alone to a movie that might induce heart attack? I walked into the theater without buying a ticket in order to query the ticket-taker before deciding on my movie.

I waited through truth-seeking by a man who wanted to know whether his number on his Regal card had been randomly selected to receive the free something, and, if not, how exactly had it been selected.

This required waiting for a manager.

Meanwhile, a couple with tickets in hand had lined up behind me.

(In a whisper) Before I buy a ticket, I'm afraid of spiders. Can you tell me whether the aliens are spiders or spider-like?

(Ticket-taker steps back from his podium)  They're really ugly and they . . .

Do they have eight arms?

They have arms that come out of their bodies here . . . (he unfolds his curled up hands at chest level, extending his fingers).

Thank you. That's what I need to know.

Sweet young man, given to over-thinking questions. I go out to buy my ticket, to the everlasting gratitude of the people behind me in line.

This movie probably won't end up as a classic, even though the actors play their classic roles seriously. The chuckles are for the audience. But what's not to like about Harrison Ford and Daniel Craig at their most rugged? And after generations of Star Trek, we're familiar with the many forms alien beings can take. There was action and excitement, even sadness, but nothing heart-attack inducing. And no spiders.


Sister is retired now, so she and Brother-in-Law returned to the mountains last night after a couple of days back in the Bay Area for appointments. (Their cats were not at all happy about the quick turnaround journeys.) Sister brought her friend of many years, Laura, to visit for the weekend, her first trip up here to our beautiful country.

Tonight we all went for dinner at The Grill, dining on the deck overlooking the golf course, with a view toward the mountains where billowy cumulus clouds hung suspended over gray horizontal layers, tinged pink at sunset until the cloud piles collapsed as the heat went out of the day. 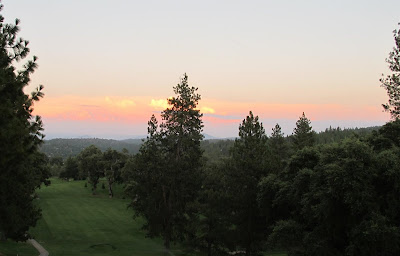 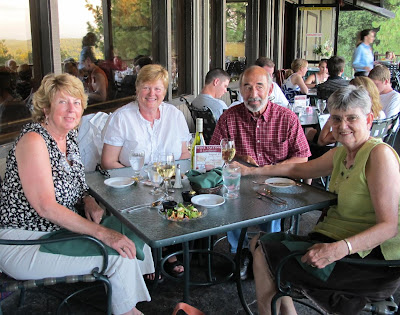 The food is a little disarranged ... we'd all chowed down before I remembered the photos. Me ... fish and chips; Sister ... lollipop lamb, although it came as a little rack today; BIL ... sirloin fillet; and for Laura ... ½-lb hamburger with sweet potato fries. 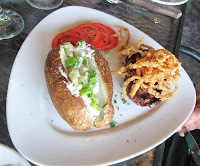 The last time I was here I had Chef Carrie's Tiramisu for dessert and couldn't resist having it again. 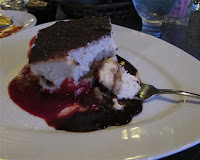 Yum to everything.  The food is so good here these days!