What's Wrong With This Picture?

Excitement! I took the little pocket itinerary in to be plastic-covered and spiral bound. It's a little too thick to hold together with small binder clips, so I carefully wrapped a piece of paper around it to protect the photo cover from the rubber band I secured it with, then put a Post-It™ on "Front" and "Back," labeling the side that the spiral should be on.  I told the clerk I didn't need it until after my evening French class but gave her my number "in case." I had a free birthday beverage from Starbucks, so stayed for a sandwich to eat with it before class. I finally recognized that the funny beep I was hearing midst all the computers in the room was actually a voicemail on my phone, telling me my little PI was ready already.


So I picked it up before class, took it out of the envelope once I got to the car, and . . . what's wrong with this picture? 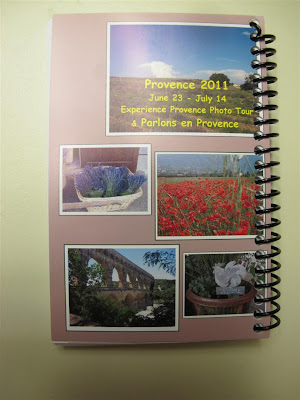 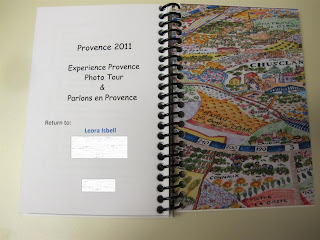 Furthermore, the plastic covers weren't on it and those are vital, as the inkjet photo covers melt in contact with water. But the Post-Its were on it and the spiral was on the side indicated. Whether I put them on wrong in the first place, or they got removed and reapplied incorrectly during the binding, I don't know. But there was no point going back then for the plastic cover. It would have to be reprinted, recut and reassembled. A backward binding had happened once before and a "lefty" adopted it without much difficulty, but I thumbed through it and I just can't do it. So tonight I reprinted.


Another cosmic question. No, really. Why is tonight's full moon, while driving home from French class, so high above the horizon, yet when I arrive home half an hour later at a higher elevation, it hasn't even come up yet?


﻿ ﻿ While I was stopped at the roadside, I liked the view of the highway stretching in both directions, courtesy of my mirror. 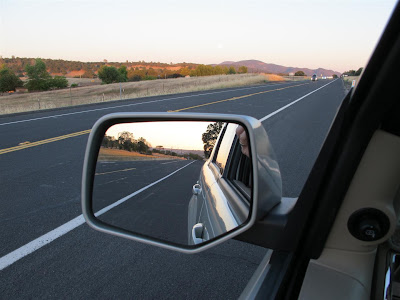 This is Tuesday, so it was Tuesday Out all day. Earlier, Soroptimist held a Roast for outgoing President Sharon. She had been warned not to do her hair, to wear old clothes, to beware the possibility of water.


We gathered for the festivities at Jeanne's lovely home. 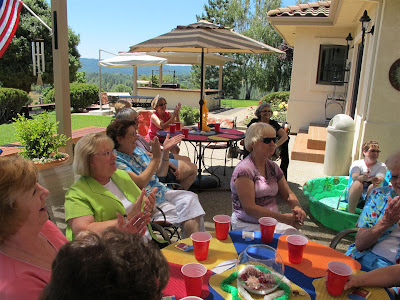 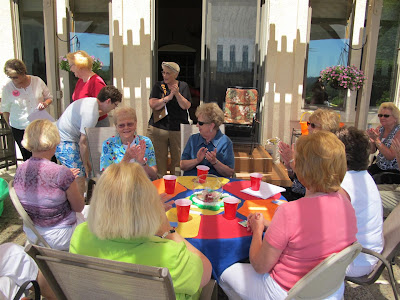 The Roast Mistress took the stage. 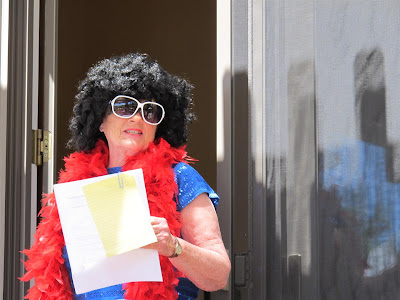 President Sharon was convinced that all the warnings were just to scare her. Nothing bad had ever happened to previous outgoing presidents. She was still confident, even though she had been seated on a beach chair in a kiddy wading pool. An elaborate story was told. Various characters took the stage, enacting incidents from herlife. When I saw people sneaking up with plastic buckets and mention was made of two watery incidents in her life, I was so convinced they were referring to the fact that on her and her husband's last two trips to Hawaii, they'd had to evacuate their hotel due to tsunamis that I failed to hear the real reason why a bucketful of styrofoam peanuts was thrown on her. And I also missed snapping a photo of the real bucket of water as it landed seconds later. No one knew that one was really coming, even the cast of the roast, except for the shadowy party who threw it. 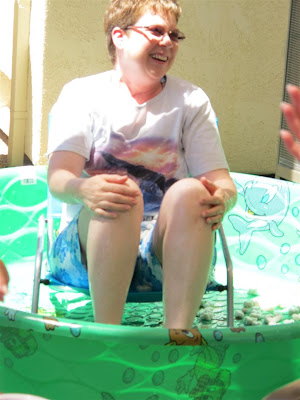 Then we got down to tasty sandwiches, fruit, orzu salad and dessert provided by Dori's Tea Cottage. 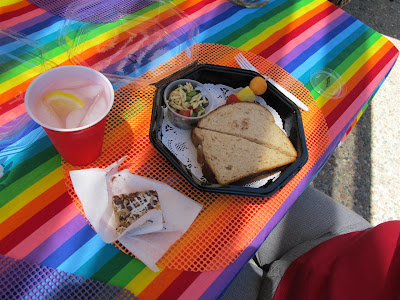 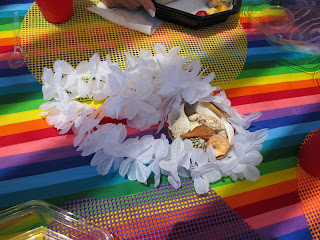