How to Get Nervous About Your Flight Connection

A new aircraft, the Airbus A380 (great big airplane), made its maiden voyage on June 6, the same flight we'll be taking from San Francisco to Paris in a few days. We will have 1 hour 40 minutes to debark the plane, clear immigration, change terminals from international to domestic, go through another security check, line up and board our connecting flight that will take us to Marseille. Our tour leaders are arriving earlier in the day and one of them is planning to pick us up at the airport. All things going according to plan, of course.

So I casually looked on the Air France website a couple of days ago. There's an advisory about a Maintenance Staff Industrial Dispute on the airline's website. The union called a strike starting June 13 for an indefinite period. How can I get a handle on the possible effect? Look at the brief history of these flights?

Please note I accidentally omitted "Marseille" at the top of the right hand column. The scheduled arrivals and departures for the two flight segments are listed in the top row of numbers. This is an overnight flight, so everything but the SFO departure time occurs one day after a departure date.

I got the departure and arrival times from the Flight Stats website. 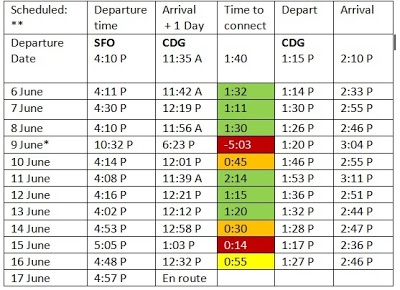 ﻿﻿Before and including June 13, six out of eight transfers were doable, another was a "maybe." But wha' happen on June 9? That's one thing I couldn't tell from the Flight Stats data. That half hour on June 14 might be doable with absolutely no impediments along the way, and there's a fair chance for the 55 minutes. I always wonder whether the connecting flights wait for the big guys to discharge their passengers. I think they do, but there must a limit.

I sent a heads-up about potential, er, alterations in schedule to the ladies picking us up. We can all start thinking about Plan B. She answered, "Well now Lee, you didn't expect things to go smoothly did you?? :) What kind of adventure would that be!"

Guess I shouldn't. That is the motto of this blog, after all.

In Spring, 2010, Jeanne's quilters tour was on tenterhooks due to the massive shutdown of European airports as a result of the ash cloud from last year's Icelandic volcanic eruptions. We got there, but didn't worry so much about getting back. (Stuck in Paris? What's not to like?) In October, 2010, when I went to a writers' workshop in Essoyes, there were transportation strikes, demonstrations, and fuel shortages. I had to use Plan B (or maybe I'd dropped down to Plan C) for that one and had my first driving experience in France. Again, for the trip I just got back from, another Icelandic volcano blew its top and a few airports closed, causing at least some talk amongst us about how long closures would last and where they might spread to.

I've Plan B'd it before, I can Plan B it again.

In local news, the motel bulletin board announces the birth of my manicurist's baby. It's a boy. (Actually, she hadn't kept that a secret. However, last time I asked, baby's name hadn't been fully decided so I can't tell you that.)

So I start off on a trip with a Plan B manicurist. 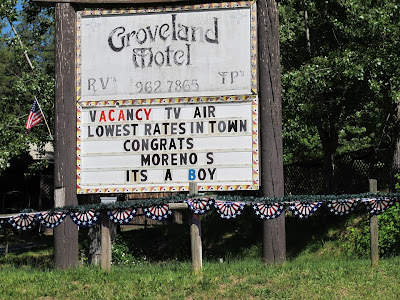 The motel is already decked out in Red, White and Blue for the 4th of July.