The Comings and Goings of Cats

I've fallen into a kind of lassitude, not feeling like blogging despite my best intentions. I'm starting to press harder toward the next trip at the same time I've returned to regularly scheduled activities and trying to recover from the last trip.

Cats weave a little bit of an unpredictable narrative through my days. Appearances of the outdoor cats are sporadic, occurring in variable combos at the food trough. Mama Cat must be taking the two kittens on forays into the wider world and sometimes none or only one reappears with her and I have a touch of anxiety about their well-being until I hear the thumps of their tussling on the deck. I don't know a feral mama's protocol for weaning the kittens, but I definitely see her teaching them things. 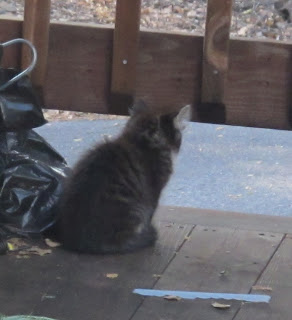 Chloe and the Boys hate it that I sit in front of the computer at the dining table on a hard, bun-numbing office chair that places me in a lapless posture. It's a temporary arrangement. So I've said since Christmas. They want me back in the comfy computer room chair. The press of working on a pocket itinerary for the next trip precludes the computer move just now, but then, will just another excuse come up? The work on it is at the tedious stage, no cute photogenic pictures of pocket itineraries at this point.

But I decided I need to sit down, kick back, and drink my coffee in the recliner, instead of at the computer. The lap was promptly filled with soon-comatose cats, so with no notepad within reach to write on, the lap-owner dozed too. For two or three hours.

Tuesday Out, I went to my first Soroptimist meeting since returning from France, the final meeting for this president and board, with final reports, a wrap up, and good food, before the new board is installed in a couple of weeks. 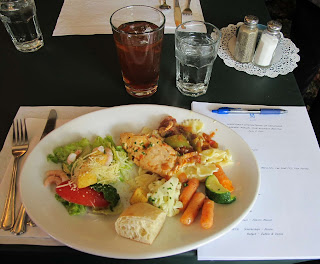 Then I had my annual physical where results were pretty good for an old lady, except for the doctor's repeated insistence that I should exercise. (But he says that to everyone.)

Then it occurs to me that the lassitude may result from a certain fixation this week with age and its ravages. You know how some ages are milestone ages:

Today was a lovely day. All the rain clouds disappeared, pleasant temperatures ensued, and Josie, my friend and cat-sitter, and I drove into Yosemite to have breakfast with our RV club at the Ahwahnee Hotel, then dawdled away the rest of the day there.

Here's Joe, husband of the club's immediate past president. He was running around taking candid shots of the 15 or so of us, so it's only fitting that I put a candid shot of him on the blog.

﻿
After breakfast, Josie and I hopped on the shuttle bus. (There was a lot of traffic today, from early on, so no point giving up a good parking spot once you get it.) We got off at Yosemite Falls and walked to a point where we could view it, but not so close as to get in the icy spray.

We wandered through the Yosemite Lodge complex. The swimming pool was open, aqua water at 80°. Back on the shuttle to the Museum in Yosemite village. There's an exhibit of Indian basketry and other crafts and lore.


In another exhibit, it's the visitors' impact on the Valley in the 20th Century. A showpiece is this 1912 Indian motorcycle. 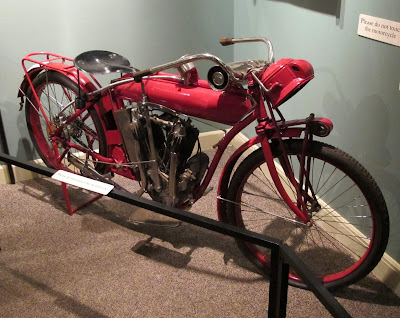 We get on the bus again to Camp Curry. Here's Josie as we sit in rockers on the porch of the Curry Lounge: 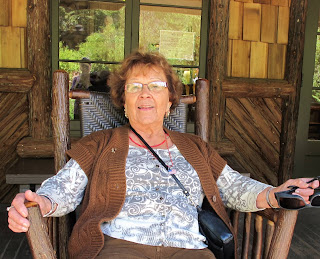 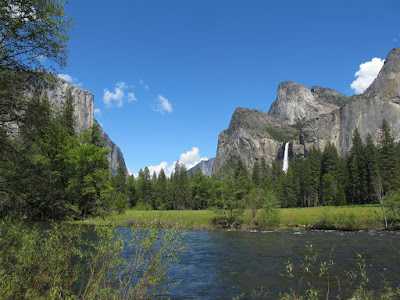 When I arrived home, Angie was there, just finishing up house and yard. What a fine day!

When it's time to go to bed, I tell the boys, "It's time for kitties to go night-night." Jean-Luc already thought he'd gone night-night. 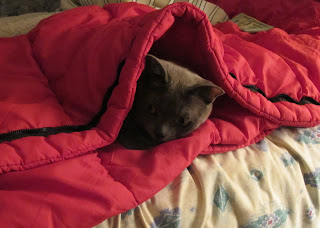 See you soon. I hope.