They had semi-Mexican food at The Little House for senior lunch today, more than I'm ever able to eat at lunch time.  I'd had a good Mexican meal last night with Brother-in-Law, who came to town to meet with his architect/engineer. After the meal we had a vigorous walk from the parking lot across from the restaurant to the post office to pick up our mail, with a vertical rise of 10's of feet.  (Exhausting.)  He also came over to put a charger on the batteries in my truck. They charged but we're not sure they will hold. One may be bad. I didn't get a chance today to see whether it still starts.

I headed to my computer first thing this morning, to answer some time-sensitive emails while my Internet was working, and before I trekked off to the Little House. Being in hard-core trip preparation mode, I didn't want to take time this week to figure out a hand sewing project for today. I grabbed a box, back to the mail sorting project, off the stack in the garage labeled "Dining room table, Xmas 2009."  It seemed to promise old documents, things I'd be able to throw away after assuring I hadn't mingled the deed to the house in with random advertisements) thus cutting down clutter. 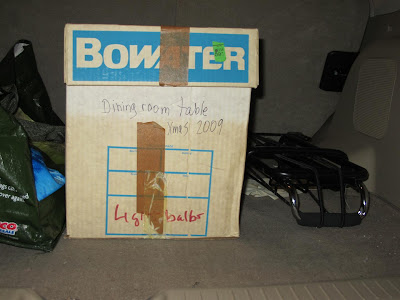 I was disappointed to open it at NeedleCrafts to find this too-neat array. It bespoke of being already sorted.
﻿﻿﻿﻿﻿

﻿﻿﻿﻿﻿I didn't finish sorting the whole boxful today, but took out about 4" of disposable material. It'll keep me busy next time as well. We were a smaller group today, with Rose, Barbara, Ursula and I on hand. Phyllis has a long-standing engagement with another sewing group on the first weekend of the month. Terri is spending the week in town with Husband. Tory, whose job is seasonal, is working full time for the summer. Our lady who wintered in Hawaii is due back this month.

I had a nice surprise from my medicare prescription plan. I'd ordered my most expensive prescription just after January 1. I'd been holding off because I was in the "donut hole" for 2010, meaning I had to pay full price for all my medications. This one was really expensive, but it had gone generic this year and it's supposed to be in the lowest price level, Tier 1. Imagine my surprise when the full new generic price was charged. Phone calls to protest, promises to research the level on the formulary. The new formulary price for Tier 1 is an $8 copayment. They refunded some the original charge, charging me only $105. I was frustrated enough at that point to throw up my hands and order next time from Costco, no insurance involved, for less than half that previous copayment. The next time I looked up the copayment at my designated mail order pharmacy, it was down to $8, where it should have been all along. Tearing hair. Yesterday, a check for $97 arrived. They'd caught up with their error.

Took it to the bank today and then stopped by the pharmacy (the tiny local drugstore) to check -- for the third time this week -- on whether graduation cards are in. They're not. The graduation in question threatens to be over before I'll be able to send a card.

This was also first Thursday of the month board meeting for the computer users group. Our member meeting program for May is set, and we heard what the presenter, who has just returned from wintering in Arizona, picked up there at the huge computer club to share with our group. Lots of talk but no specific action on programs for future meetings. I offered trip photos, but that's only computer-related insofar as I'd be using a digital camera and sharing via a computer hooked to a projector. Lots of pained looks. (Just kidding, fellas.)

Then I opened a can of worms. I thought I'd check with Air France online to see whether there is a flight at the end of my later summer trip from Marseille to Paris that isn't as short a connection as the one I'm booked on. Not just a little dismayed to find the San Francisco to Paris and return legs of the journey listed as cancelled. Then there were second flights listed for roughly those same time slots, but in the space where we expect to see status "confirmed," we see N/A.

This turned into "we" after I emailed Sister who is finding the same enigma. By the time we got on the phone with each other, my Internet is out for the night, so she tried to get seat assignments together for us both again, with weird results. If you've been reading this blog for awhile, you know how carefully we booked our flight and seats together over simultaneous phone and Internet connections. (Another Step Forward)

To make me even more unsettled, my flight to France coming up soon now is also listed as N/A. The website help form refused to Send and I was too late for the phone assistance line. I know someone who took that same flight today. I wonder whether she faced these conundrums? 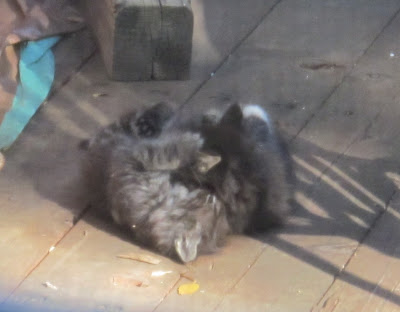 They are too cute. Little Kitty Girl is a good mom, teaching them to hide at her command. I haven't touched them, nor do I plan to try, since I won't be around to follow up on acclimating them to people. I'm trying so hard not to develop an attachment to them.


See you when I can.