﻿﻿﻿
﻿﻿﻿﻿
By the time we returned from a marvelous group dinner Thursday, I'd taken packing as far as it could until just before departure Friday morning, and I had downloaded 173 photos taken during the day, I looked at my watch. Midnight. I set my alarm for 5:30 a.m., thought "blog?" and said, "Nyah!"

I said I wasn't going to shop, that I'm not here to shop, I'm not a shopper. There are dedicated shoppers among us, but I said it again. Not shopping. Everyone wanted to go first to the vendors' building at Quilt en Sud for the quilt show. Except me.

I was somewhat, although not massively, misinformed. I didn't buy a lot, one was spur-of-the-moment and the other as a result of some deliberation. But more on that later. Definitely shopped.

﻿
﻿ Quilt en Sud is held in many small venues around Saint-Jean-de-Luz and Ciboure. Some are within walking distance of each other, and a few are only for the most enthusiastic of walkers, so shuttles are provided to those. The shuttle starting point was near quilt show HQ, so while we were there, we signed in and checked first the nearest quilt venue. Then I guess they all headed for the vendors.

﻿
﻿
﻿ ﻿ After finishing up with Building 2, I went back to HQ to pick up a little souvenier keychain with a tiny espadrille on it. These are traditional Basque canvas shoes. They were so cute I thought I'd also take a couple or three more for little gifts. Then I saw a pattern for the seaside view of Ciboure. (See the little quilt at the bottom of my last blog.) Oh, and a pattern of this year's abstract ships used in their advertising. The ladies staffing the booth were so thrilled that I was one of those who had come all the way from Californie for their quilt show that they became totally discombobulated at adding up my purchases. Then they asked me if I needed a sac (French spelling) for my purchases. Since I wasn't going shopping, I hadn't brought along a tote, and the two big slippery plastic pattern envelopes and four tiny espadrilles would not make easy carrying. The only sacs they had were canvas logo sacs, 4 euros. The addition started over, they finally threw up their hands and said the sac was a gift. Well, it wasn't quite, once my change was returned, but the thought was there, and there, I had shopped.


I wandered about looking for all the venues between HQ and our hotel, taking all those pictures. I left packages and camera in my room to step next door to the Salon de Thé (tea) for lunch and wished I'd brought the camera. I ordered a croque monsieur, the French version of a toasted ham and cheese sandwich, with an accompanying salad. Blogger Nina Camic talks about fresh and honest foods. I don't know whether fresh and honest applies to ham and cheese sandwiches, but this one was. I had my first croque monsieur ever several years ago at a brasserie in the 16th, prepared in a standardized manner but very tasty. You know how you have a new dish sometimes, then expect to find some similarity in taste when you order it at another place ... and it doesn't? Now you're on a quest to duplicate the good experience but must run through fine, okay, and truly awful along the way. Croque monsieurs. Kung pao chicken at the Chinese in Mission Valley. Don Pedro's chimichangas. Nick's chicken enchiladas.

﻿﻿﻿﻿
﻿﻿﻿﻿
﻿
﻿ The croque monsieur at L'Acanthe Salon de Thé in Saint-Jean-de-Luz oozed over with a whitish cheese inside and out (this is one thing that distinguishes it from American ham and cheese sandwiches), thin slices of ham, handsliced, their corners peeking off the edges of the bread, browned cheese on the top (broiler?). This is a gooey knife-and-fork dish, not something you pick up with your fingers. The greens in the salad were crunchy fresh, with small wedges of tomato and long slivers of a variety of vegetables topping it, and a nice vinaigrette.

L'Acanthe is located almost across the street from store where the thin French beach towels are being sold. The colors remind me of Guatemalan weaves. I'd been thinking about them since I saw them in the store the day. They're thin for carrying, but adequate to keep the sand off (not that I actually like to sit in the vicinity of sand). Maybe such a lovely towel would encourage me to go to water aerobics when I get home? They're light enough and small enough to in a suitcase. I can't choose between the colors, brights, naturals, sophisticated black and white (the bathing suit I've ordered from Land's End must surely be black. Or is it?). I find the towel is lined with a light weight terry cloth. There is a velcro-closed pocket. There are fringes. It can be used as a sarong, long or low. And it can be used as a light cover while I take a short nap instead of heading out to any more quilt show venues. I have, after all, seen some beautiful contemporary quilts and other needlecrafts and I can only absorb so much.

There you have it. A shopping spree. Once I start a spree I can barely control it. 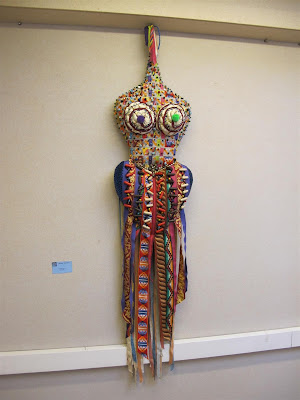 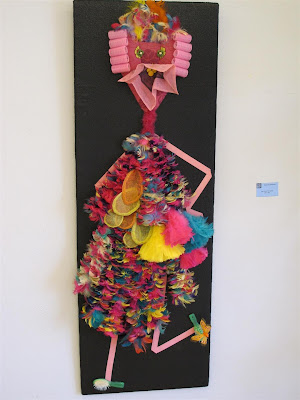 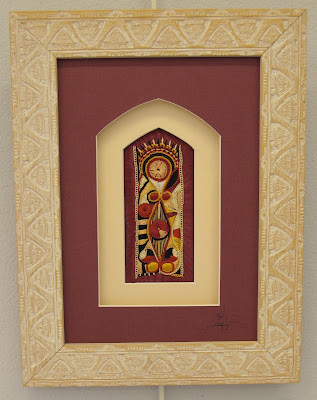 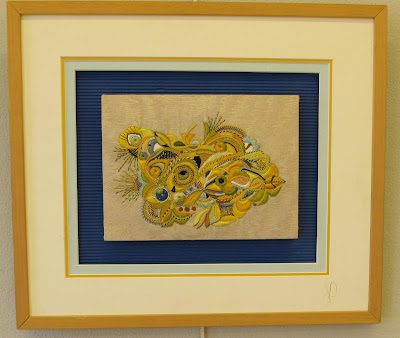 * About 120 of the pictures I took are of the quilts per se.  A few are included here. Perhaps more later.

Email ThisBlogThis!Share to TwitterShare to FacebookShare to Pinterest
Labels: Quilting