Practically everything in my meal last night was past its expiration date, by a little or by a lot. I wrote that down in case I woke up dead and someone wondered. It was my frequent corn and salsa omelet. Frozen corn, of course, was okay, but the eggs expired in February and the sour cream in January. I'd accidentally bought the wrong kind of sour cream for Christmas -- the fat rather than the non-fat -- and I use it more sparingly. (How do you tell if sour cream has, well, gone sour?)

I newly opened the HOT salsa, but it expired a few days ago. Fortunately it contains several preservatives. Unadorned fresh salsa can do bad things rather quickly.

I doubled down on the old eggs for French toast this morning. I do the float test with the eggs. If they don't pop to the top of a glass of water, they're okay. Unless it's a very old egg; then it sinks like a rock.

It's been a bleak week for blogging. I'm a nighttime blogger and my Internet has been out every night, and my days have been busy with other doings. Last night I went on dial-up to try to pay a couple of bills, and after waiting forever for one, "We're not available just now, please try later."  Tearing at my hair. We had a power failure for several hours Friday afternoon which I'm sure set back efforts to remedy the Internet problems. I think a capsule explanation is something to the effect that wrong parts were supplied, right parts are back ordered.

With everything electric and electronic dead in the water, I had nothing to do but haul boxes out of the closet laden down with travel-this and travel-that, and sort through what -- if anything -- I'd need for my upcoming trip.

We're expected to travel small and light so we must become accustomed to seeing each other in the same outfits day to day. Heck, we wouldn't recognize each other if we weren't in the uniform.

The heaviest thing I'll be toting is my pills. A French pharmacist is wonderfully helpful, but they don't have Excedrin or my antihistamine, or all the vitamins I take in lieu of healthy eating (although I'll do a little better in France). I take a stretchy clothesline, but hotel shampoo and/or body wash does fine for laundering self and undies. Oh, and of course, all the chargers for cameras, phones, PDAs, Kindles and, I hope my tiniest computer.

The power outage didn't deter the high school seniors from putting on a big spaghetti feed for the benefit of a local person with cancer, so I got fed well that evening.

I went to Thursday's out -- NeedleCrafts -- with my project bag in hand and pulled out the quilt, and then the wallhanging, to finish up the hand work.  And darned if I hadn't finished them the week before. So now I'm stumped about what I'll do this coming Thursday and subsequent Thursdays. I need a major hand project.

Phyllis has started a new knitted quilt, a companion to this one for two young relations.

﻿ ﻿ Each block is made in a different pattern. 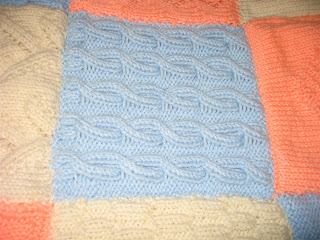 Later that day I went to the doctor for cortisone shots in my hips which we're trying this time.  (Sister says it's the trochanteric bursa.) I can walk a little more freely, though I still have lower back pain. It was a beautiful afternoon. 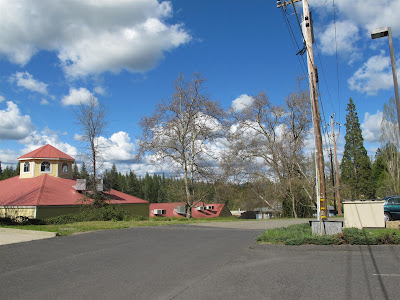 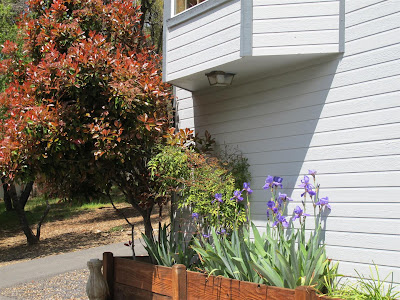 Little Kitty Girl was on my back deck when I got home, begging for food. 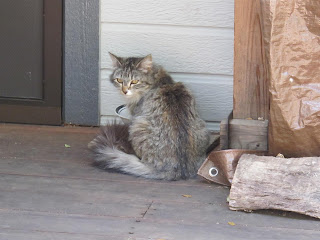 She expects several small meals a day.  She won't be getting that when I'm away. She and Black Kitty had been appearing irregularly for a few days and I was somewhat concerned, although hopeful that they were no longer homeless.

But then -- I looked out the side window of my house, and there were three adorable kittens. I am dismayed, to say the least. They appeared on my front deck today.

﻿ ﻿ I knew she'd been pregnant but thought she'd lost the pregnancy, having seen no signs of kittens since she suddenly looked unpregnant on March 16.

I have enough on my hands with these boys and Chloe. 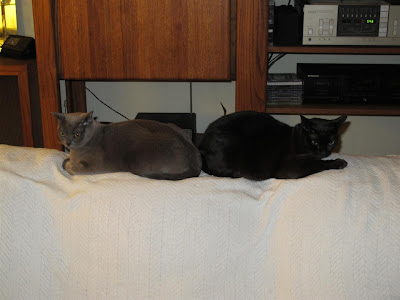 I also discovered these on the deck.  Nutritional supplements, I guess. 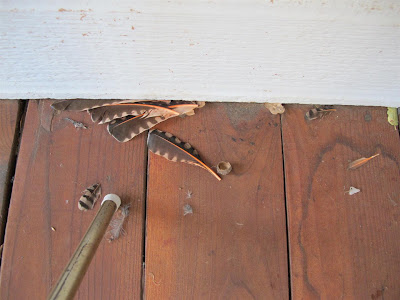 I see my nighttime Internet woes have resumed. This may end up as a daytime post.