This finishes up our our last day in Saint-Jean-de-Luz with some of the non quilt textile exhibits that I didn't cover in "Quilt en Sud" and "Concours « Chocolat, chocolat »," capped with a group dinner and an unusual event.

"Les raquettes s'amusent" were made by the children of St. Joseph's school and displayed on the beach. My dictionary translates "raquette" as a racket (for various sports), so here we have "The rackets have fun." My guess is that each little figure has a racket within. 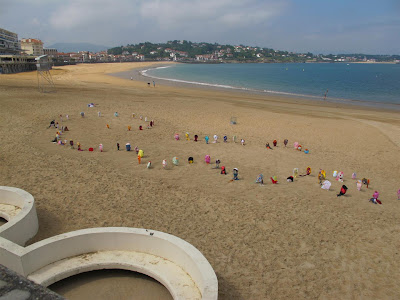 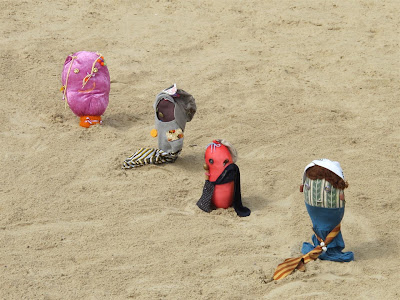 Hmmm.  Did one of the raquettes go for a swim? 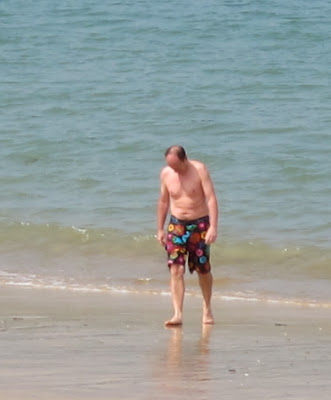 This is Ciboure, the city across the river from Saint-Jean-de-Luz.  I bought a quilt pattern with some portion of this view.  It's perhaps the least descriptive pattern I've ever seen, but I'll take a shot at it. 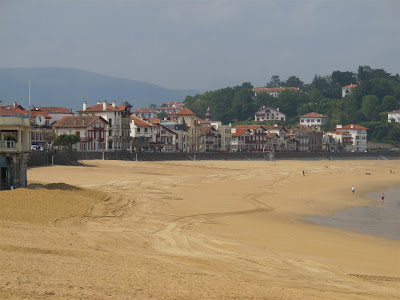 ﻿﻿ ﻿﻿
﻿ ﻿ Back after a stroll down the beach along the seawall to another venue for the quilt show. After I'd seen the Chocolat exhibit and the other artists showing in that big room, I turned in my chocolate vote and the ladies at the table waved me down a hall to see another room, with a few verbal instructions in French to go left, straight, left past the something. I followed the occasional arrow. Ah. A restroom. I could use one of those. Not. I think the sign on the door said "reserved for restaurant patrons, quilt show people go downstairs outside." A glimpse in the door of the restaurant ... a classy business venue. I continued on, through some open double doors. This hallway had a distinctively behind-the-scenes look to it. Yes, there's something kitchenish or perhaps dishwashing. On down a few little steps, up a few little steps. You know I'm being especially cautious on steps after the flying-to-flop episode.

Finally, a room with our (Quilt-en-Sud) name on it: "Broderies du Kutch (Inde)." I recognize "embroidery," or at least I think I do. In the room there are displays of various ethnic or tribal styles of embroidery. 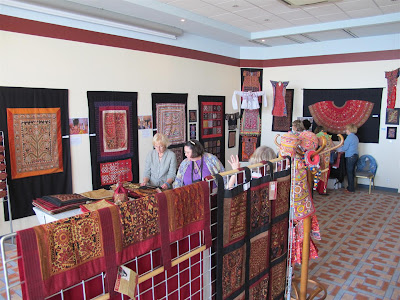 I liked the patterns labeled "JAT," for example. 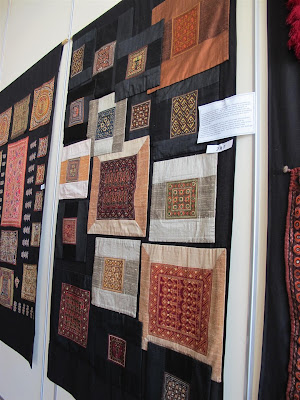 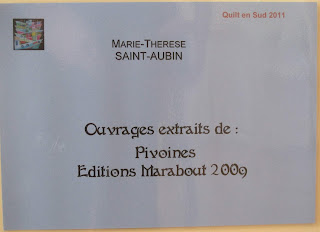 This is the finest count cloth I've ever seen cross-stitch on, except for the cross-stitched handkerchief someone bought on Rue Cler last year. 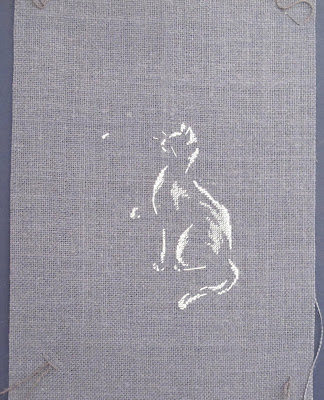 My French beach towel. Very light weight, no bulk. Colors much like Guatemalan fabrics on the "outside," very fine terry cloth inside. It includes a Velcro-closed pocket and it can be worn as a wrap or sarong. 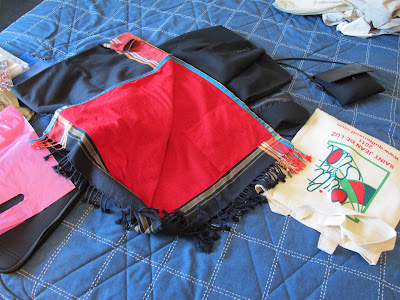 ﻿﻿﻿ ﻿﻿﻿
I suddenly recognized the restaurant as one of the town's old stone buildings, described by Iban, our Basque guide, with its tower from which a ship owner would watch the sea, a building that survived the frequent flooding of earlier eras. 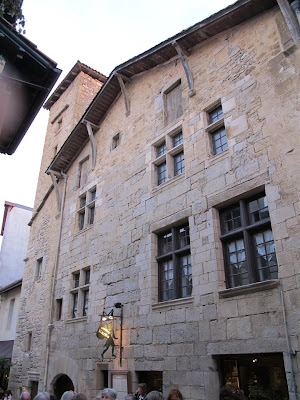 ﻿﻿﻿﻿﻿﻿ ﻿﻿﻿﻿﻿﻿
I think we'd finished the meal and were awaiting dessert when one of the men in our group abruptly excused himself to return to the hotel. His wife chose to go with him.

She returned a short while later asking Jeanne, our leader, to see whether the nurse in our group could stop by to see her husband when we got back to the hotel.

For the moment, that was that, until late that night I saw the wife outside walking quickly back and forth on the sidewalk, as if searching.

This is not intended as a suspense story, so I'll summarize what happened over the next couple of days.

We were all packing that evening, a Thursday, for our transfer to Paris, to have our one large bag out for a van ride to the train station at 6:30 a.m. Friday, while we would walk to the station with our carry on pieces at 6:45. The husband had scouted out the best foot route and planned to lead us, while Jeanne would wait at the train station guarding our van-delivered luggage.

The wife met us at our pre-trip breakfast with news that her husband was in the hospital, sedated, being given tests, but with a probable kidney stone, so clearly they would not be traveling with us. The wife and I figured out how she could call my purely French cell phone from her American cell phone which was set up to work in France.

I got a call from her Friday afternoon to tell us that they'd been moved by ambulance from Saint-Jean-de-Luz to a hospital in Bayonne for likely surgery. Most of us were scheduled to fly back to California on Tuesday. It was her hope that he'd be in a condition to get to a hotel at the airport in time to fly on schedule.

She tried to reach me Saturday afternoon but it ended up as missed call/missed message. That evening, when I returned to the hotel after a late dinner, I found out our patient and wife were now at our hotel!

His stone had been too large to break up for removal, so a bypass had been done. No surgical incisions so none of us could figure it out. Neither of the couple speaks a word of French. Follow up when he gets home would be necessary.

I tell this story at all because Sunday morning at breakfast they both began to enumerate things they wished they'd known that would have smoothed the experience, and it seemed like useful information for anyone who travels. She agreed to talk to me about those things so I could blog about them.

And I'll do that.