Have you ever gone to a luau and no one was there?

Sister, Brother-in-Law and I did when we went to the advertised location on Sunday. 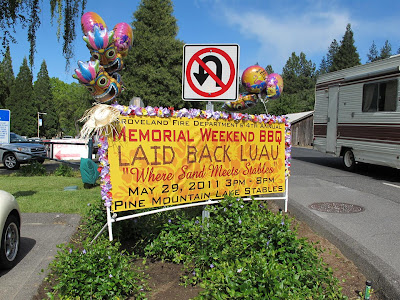 "Unsettled" is what they were calling the weather, which means that when Sister and BIL picked me up on Sunday to go to the luau, half of my deck was wet from rain I hadn't even noticed, the other half dry. Since the luau was to be put on by the fire department for its benefit, we'd decided to press on, weather notwithstanding, as our contribution to the community.

Absence of cars in the stables parking area didn't register. It took another sign . . . 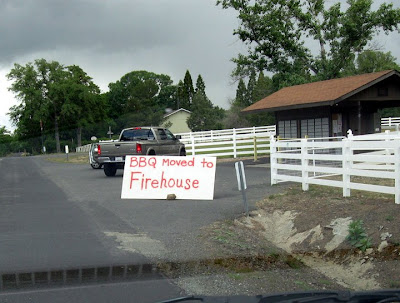 I got this photo off my friend Bob's Facebook page, so he and his lady must have gone to the stables, too.

Off we went, downtown to the firehouse. It was more festive there. Awnings were lined up in the end of the park, sheltering BBQs with a long row of roasting tri-tips. A palm tree sprouted in front of the firehouse. 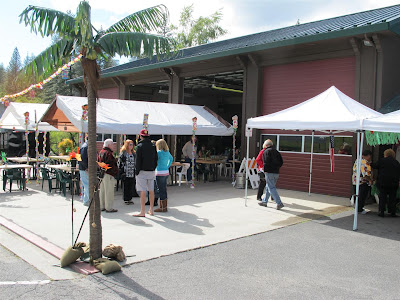 There were tables under awnings (is that what you call those?) and inside the firehouse.  We looked around for ticket sales, were directed into the office where we were sold pretty tickets. We wound through a little maze and emerged into the area where the firetrucks live and promptly had to surrender our pretty tickets.  It's huge in there!

Where are the firetrucks?
Out back?  Or next door?

We were immediately in the food line.  BIL immediately began calculating the height of the doors, of the ceiling, comparing it to his proposed garage space.

Maybe you could open a branch firehouse in our end of town. 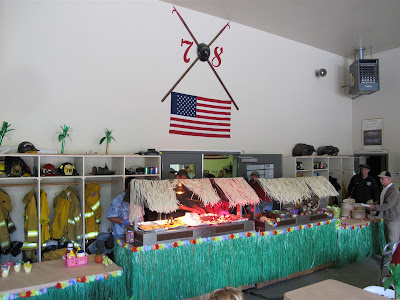 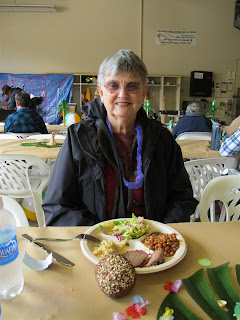 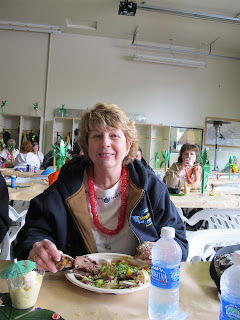 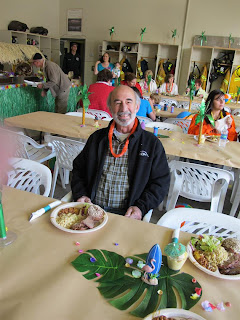 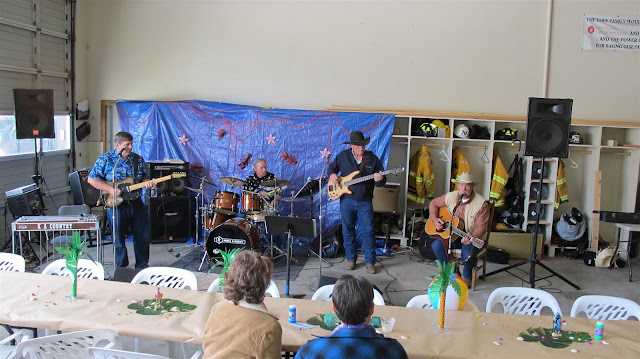 We were early, the crowd was small but picking up as we left. We went to look at the firetrucks -- next door, out back. No photos of the firetrucks ... my camera battery was waning. We hoped there'd be no fires during the luau. All the turnout gear was in nooks around the firehouse wall.

The relocation of the festivities was carried off beautifully. We wondered when Plan B had gone into effect, since everything looked like it was where it was always intended.

Some kitty history for anyone new here. My resident indoor cats are Chloe (calico), Henley and Jean-Luc (Burmese hot-house flowers, the reason why I don't want close contact with the outsiders).

Black Kitty was apparently abandoned when his people moved several years ago. He got himself a regular food route in the neighborhood, including intermittent stops here. Early this year, Black Kitty occasionally brought a friend, a small fluffy gray-striped cat -- wild as can be -- to share the meal. (He'd even let her eat first.) I dubbed her Little Girl Kitty based on nothing more than a pretty face. After awhile, they became -- ahem -- more that "just friends." Soon Little Girl Kitty was sporting a big belly.

In March I was away for a week, but Black Kitty and Little Girl Kitty discovered when I got back, and appeared for a meal. The following day, no kitties, then the next day, a skinny Little Girl Kitty reappeared.

They continued to come around erratically, sometimes together, sometime not. I assumed Little Girl Kitty had somehow lost the pregnancy and/or kittens . . .

. . . until three little kittens appeared in my yard with her late in April. (Way down in Past Sell-By-Date ) Although my cat sitter saw all three kittens from time to time while I was in France, one was missing when I got home. There's a strange big hole in the tarp covering the woodpile they hide behind, which I vaguely thought they had caused, but the sickening realization just came to me that something much larger had to have made it. 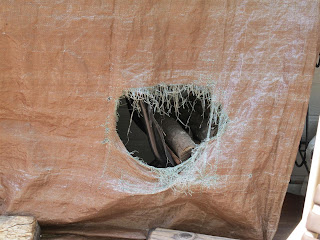 I'd only seen Black Kitty once since I got home, on the front deck, eating some food I'd left there. He had an apparent wound on the side of his neck.

So at dusk Sunday evening, I looked out to see Little Girl Kitty -- let's rename her now to Mama Kitty -- move quickly on alert toward the edge of the deck. The kittens usually dive for cover at any Mama alert or noise I make opening the door.

Black Kitty strolled onto the deck and Mama Kitty walked up to nuzzle him, followed by bounding kittens doing the same, all nuzzling and licking each other like greeting the returning warrior, for the patch of missing hair on his neck was much larger. I didn't disturb this poignant moment to try to get photos or a closer look.

The little family relaxed together at the edge of the deck until it was too dark to see them any longer.


On Memorial Day itself, Sister and BIL invited me to their hamburger BBQ, topped off with strawberry shortcake. They had spent most of the day working on yard clean up.  (Sister's new retirement occupation???)  I'm not sure what I did all day.  The day just dissolved into this interesting post-sunset view. 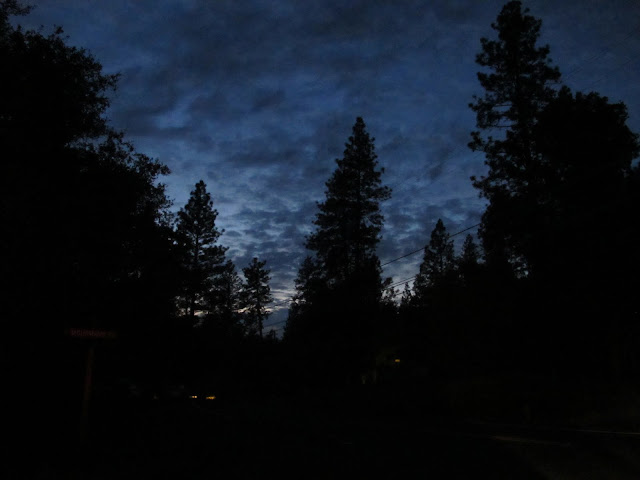